Rutgers, Idaho and Portland State are the first three Huskies football opponents. Gah. Coach Chris Petersen is nearly begging fans to show up. Clearly, they have better things to do. 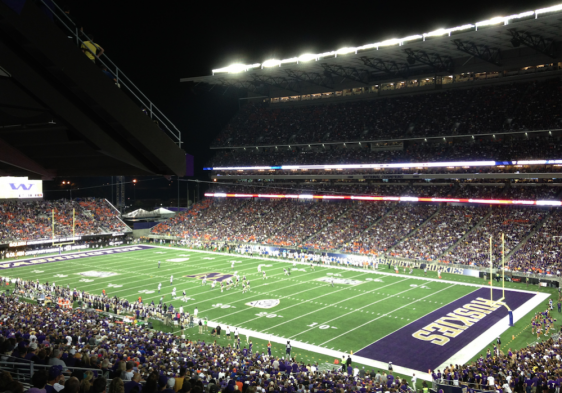 A live game at Husky Stadium seems to be losing its charm. / Sportspress Northwest file

Despite starting out ranked 14th in the country in the Associated Press poll, following numerous preseason predictions of a potential North Division Pac-12 championship, coach Chris Petersen felt compelled to sell Washington fans on the necessity of coming out to the season opener against Rutgers at 11 a.m. Saturday at Husky Stadium.

“For everybody who has season tickets or game tickets, even if they can’t make it, pass them on to their neighbor,” he said Monday at his weekly presser. “It’s just really important to this program.

“I know (Husky Stadium) back in the day was one of the hardest places to play, because of all the passion that showed up in the stands. So I’m always making a plea to come to the games. Eleven o’clock kickoffs or eight o’clock kickoffs are not, sometimes, ideal. But we need you.”

Petersen’s tub-thumping is probably not exaggerated. Washington athletics projects an operating deficit of $14.8 million this year. A part of that is lagging attendance at football games. That helps explain why Petersen feels compelled to offer instructions to fans in how to unload tickets.

Next week, for the game against the rapidly disappearing Idaho program, perhaps Petersen will be at the corner of Montlake Boulevard and Pacific Street, handing out Starbucks gift cards to anyone who shows him game tickets.

The program claimed an average attendance last season of 61,919 fans, down from 64,508 in 2014 and 68,769 in 2013, Petersen’s first year. But it is difficult to work up much eye moisture for a program that actively annoys its constituency with lame opponents, erratic, inconvenient scheduling and often a better game experience at home than the hassle and expense of live attendance.

Do Petersen and his bosses really expect a lot of purple-and-gold gee-whizzery for a morning start on Labor Day weekend against the worst team in the Big 10 that is a 26-point underdog and breaking in a new coaching staff? Followed by a game with the Spuds, who are dropping out of FCS play after this season? Followed by Portland State, which is already out of FCS in the Big Sky Conference?

This is the worst schedule since Muhammad Ali booked George Chuvalo, Henry Cooper and Karl Mildenberger.

Yes, we know games are booked years in advance. Yes, we know the Huskies are beholden to the vagaries of the Pac-12 Networks schedule, even though it is a dorky monster they helped build. And yes, we know that all Power Five conference programs fill the non-conference schedules with French pastry.

But as an entertainment value, this schedule is plainly putrid. Fans don’t have to care about the reasons; they just see that nearly half the seven-game home schedule isn’t worth setting one foot outside the house.

UW competes in the marketplace with one of the most intriguing teams in all of American sports, the Seahawks, as well as the rest of the college football nation whose games can be telecast or streamed into every home, pocket or purse. They also compete with a Seattle September that offers many outdoor amusements.

This is not the Southeastern Conference — in which former UW athletics director Scott Woodward now works — where entire small cities relocate into giant stadiums on game day. Five of the Pac-12 schools reside in three of the U.S.’s top dozen marketplaces — busy places with many entertainment choices.

Woodward and his fellow Pac-12 ADs helped guide their schools into deficits by making the content of Pac-12 Networks too expensive and unattractive for the main satellite carrier in the huge region, DirecTV.

The biggest culprit in the negative numbers around the conference, especially including the smallest market in Pullman, is the revenue shortfall from the P12 nets, not lagging attendance. But it is forbidden to speak ill of the house derelict. So Woodward’s successor, Jen Cohen, chooses to sound bewildered.

“We’ve never had this kind of debt before around here,” she told the Seattle Times in June.

One of Cohen’s learnings in the top job is that her Pac-12 colleagues have boxed themselves into a revenue corner: They built an unwieldy TV network that fails to serve enough constituency to pay off the facilities arms race in which they have all engaged, while alienating the dwindling die-hards who resent coming to coming to games at 3 a.m. Siberian standard time.

Petersen obviously has little say in the business matter. But after a couple of Friday afternoons handing out curbside coupons in the rain, he may have to think about clearing his throat.