In what is likely a standard question for NFL players these days, Russell Wilson was asked for his views on Colin Kaepernick’s anthem protest. His answer couldn’t have been smoother. 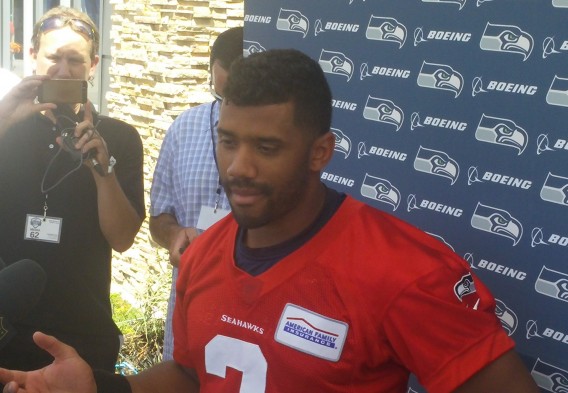 Since some fans asked, “What would Russell Wilson do?“ after the Colin Kaepernick dust-up over the national anthem, the Seahawks quarterback responded Tuesday with a lengthy, polished answer that said all the right things, supporting all sides and leaving no room for controversy.

It’s Wilson at his escapable best.

“I think, first of all, there’s no perfect answer,” he said of the 49ers quarterback who sat during a pre-game anthem Friday to protest what he called oppression of minorities in the U.S.,  drawing intense criticism as well as support. “I understand and respect the cause, because there’s so much going on in America right now. There’s so much hurt, there’s so much pain. Ultimately, I understand what he’s doing.

“I love the flag. I love the national anthem because it’s an emotional time for me, because I’m so grateful I get to play on the football field. Every time I get to put my hand on my heart, it’s truly an honor to the military for me. I think about my family members who have served and friends. I train down in San Diego all the time so I’m around the Navy and I see those guys. Just to see those guys around and all they do for our country and the people in Afghanistan.”

Wilson said the coincidence of the Seahawks opener on Sept. 11 was not lost on him.

“I think about all the pain from that,” he said. “That’s why I stand and put my hand on the heart. I do think there’s always issues in our country.

“I have a great appreciation for what this country is based on and what it should be based on — equality. It should be based on people having freedom of speech — people can have that decision. I understand what he’s doing. But at the same time, I also think about where we need to go. Where our thoughts need to be, it needs to be about love, it needs to be about caring for one another. That’s for every community every situation, every socio-economic status. If we focus on that, maybe something can change.”

Wilson managed the answer without mentioning either Kaepernick’s name or any specifics of his rival’s actions, and hung the response on love and patriotism. Straight outta public relations 101.

If the Seahawks offense is this smooth, prepare for a trip to Houston in February.