Thiel: Rutgers had no shot at Huskies’ Ross

In a 48-13 rout over Rutgers Saturday, Washington went deep often, and twice found for TDs WR John Ross, who missed all of last season. He is not to be missed this season. 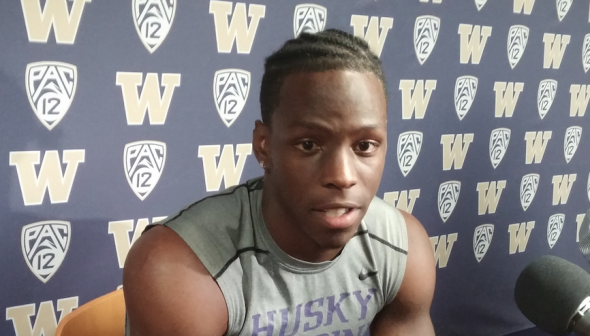 As a sophomore in 2014, John Ross took it to the house on plays of 91, 20, 55, 75, 86, 100 and 96 yards, an average of 75 yards per touchdown play. Then he hurt his right knee in spring ball. The day after he learned he would need surgery to fix a torn ACL, the Huskies wide receiver entered on his smartphone calendar for Sept. 3, 2016 an image of the mascot of the Scarlet Knights of Rutgers University.He didn’t call it a target, but after Saturday’s 48-13 Washington victory, it is reasonable to say that Rutgers was blown up, in large part by the UW’s weapon of fast destruction. After missing all of the 2015 season, Ross scored on touchdown passes of 38 and 50 yards and a kickoff return of 92 yards.

To say Ross was elated is to under-sing matters by an octave or two.

“I’ve been looking forward to this day forever,” he said, beaming. “I feel amazing, I feel good. I’m so grateful — everything you can think of.

During the week, he wanted to run back to opening kickoff so intensely that he approached coach Chris Petersen, perhaps figuring that he may get only one kickoff chance from the 26-point underdogs who were 4-8 a year ago.

“I was joking with him: ‘You sure you want to defer this (opening kickoff)?'” he said. Petersen declined Ross’s option, but did dial up two first-quarter passes from QB Jake Browning so Ross could re-acquaint himself with the end zone.

Then with 2:36 left in the first half, Rutgers made a field goal to cut its deficit to 24-3, and made a mistake: It seemed that the new coaching staff must have seen no film from Ross’s 2014 season. The Knights kicked off to him.

The subsequent whoosh made little whitecaps on Lake Washington.

“John is as fast and explosive as they come,” Petersen said. “That is a nice weapon for our offense to have.”

It was the 10th play of 50 or more yards in Ross’s career. He has five TDs of 90 or more yards, and owns the school career record of four TDs on kickoff returns. He may not see another kickoff this season.

Browning likely came in a close second to Ross in the enthusiasm for his teammate’s return to full health.

“It was great to seem him come into his own after missing all of last season,” Browning said. “He has worked hard and has been so humble.”

Ever the cautious schoolmarm, Petersen wanted to curb the Ross gee-whizzery. When the distant day comes that the Huskies end this exhibition season and finally play a Pac-12 Conference team, that team will know Ross and plot to stop him.

“We want to give the other guys a chance to develop because it can’t just be the John Ross show,” he said. “People will figure out how to slow that down fast. I think it is really nice to come out of the gate and make some plays there. People have to pay attention to that closely.

“We do have some other firepower.”

Browning figures prominently in the calculation. He finished with 18 completions in 27 attempts for 287 yards, three TDs and one pick. But it was look of the deep balls he threw that was the sharpest distinction from his freshman season.

The first TD, a 43-yarder to WR Chico McClatcher three minutes into the game, was lofted high instead of flat so that McClatcher could use his speed to get under the ball. Before the snap, Browning demonstrated further acuity when he recognized that, after McClatcher went in motion and drew a linebacker one-on-one, he called off a run play and went to the fly-route mismatch.

“(The deep ball) was something I struggled with last season but I have been getting better through spring ball and fall camp,” Browning said. Those little things here and there, when you are throwing the ball that far down the field. The smallest detail can make the difference.

“It was nice to get that going and obviously Ross helps with that.”

The plaudits bear an asterisk because in terms of talent, the scandal-ridden Big 10 Conference team seemed barely FBS-level. After the start of the third quarter and ahead 34-3, the Huskies poured in backups. The claimed audience of 58,640, which was about 20,000 over the in-house crowd, dissipated steadily after the sun broke through and people realized there were greater amusements to be had.

But they did get to see a half from a defense that was every bit the gnarly outfit forecast to be the best in the Pac-12. Rutgers had 117 yards of offense in first two periods, 46 on the ground. Linebackers Keishawn Bierria and Azeem Victor combined on 23 tackle and offered no evidence of a dropoff from last year’s outfit that led the Pac-12 in total defense.

A true measure of the Huskies is almost a month away against Stanford Sept. 30. But a first game is a first game, and when it’s been 18 months between games, as it was for Ross, it may as well have been the Super Bowl.