The Mariners lost for the10th time in 12 games, but the outcome was secondary after Angels starter Matt Shoemaker was struck by a liner. He had a small skull fracture, hematoma and laceration. 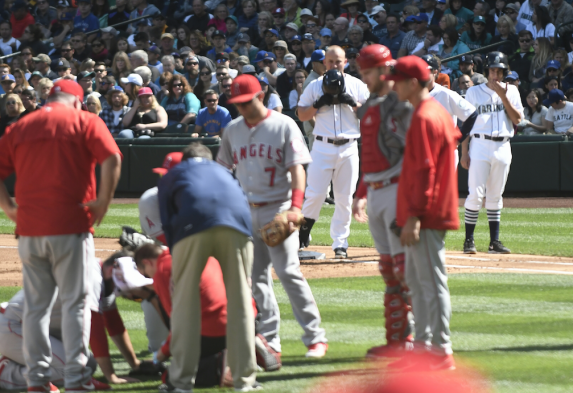 As Kyle Seager looks on from first base, Angels pitcher Matt Shoemaker gets medical attention after being struck in the head by Seager’s line drive. / Alan Chitlik, Sportspress Northwest

The Angels jumped out to another quick lead, holding on to beat the Mariners 4-2 (box) on a Sunday at Safeco when solo home runs from Robinson Cano and Nelson Cruz weren’t enough. Seattle (69-67) has dropped 10 of its past 12 and is five games out of the final AL wild-card with 26 games to go.

The game became secondary when, in the second inning, Angels starter Matt Shoemaker took a line drive from the bat of 3B Kyle Seager to the right side of his head. Shoemaker fell to his knees, then put his hands on the ground. A concerned Seager ran to first base, then appeared to wipe tears away as he watched trainers tend to Shoemaker near the mound.

Shoemaker, 29, walked off under his own power, holding a towel to his head to stop the bleeding from a laceration. He was transported to a local hospital, where he was diagnosed with a small skull fracture and hematoma. The plan was to keep him at least overnight.

Starter Hisashi Iwakuma had his own, far more modest, health issue in the top of the third inning. After throwing a pitch that led to a 3-0 count to Mike Trout, Iwakuma winced and reached for his lower abdomen. Trainer Rick Griffin came out. After throwing a test pitch, Iwakuma stayed. He made it through seven innings, allowing three runs off eight hits. Relievers Dan Altavilla and Drew Storen finished.

Six relievers were deployed in Shoemaker’s absence and limited the Mariners to two runs.

Cano hit his 31st home run, and Cruz crept closer to his third 40-homer season in a row with No. 35. The duo combined to go 4 for 8, but the rest of the team went 4 for 24. The Mariners had seven hits but couldn’t rally from the early 2-0 deficit on first-inning solo homers from Albert Pujols and C.J. Cron.

“It was kind of like: ‘Screw baseball. Who cares about the game?’ When you see the trainers on the field like that, you don’t care about a stupid game at that point. It’s definitely scary for it to hit him square like that.” – Seager

“That’s awful. You kind of have to catch your breath for a second. We’re relieved to hear that it looks like everything is under control . . . It just gives you that feeling where you have a pit in your stomach . . . He was conscious the whole time. All the attention he got and all of those guys did a great job to evaluate him.” — Angels manager Mike Scioscia

Before the game, the Mariners activated reliever Drew Storen, out since Aug. 20 due to inflammation in his throwing shoulder. Seattle also promoted LHP David Rollins from Tacoma to add another arm to the battered bullpen. The pen has 10 pitchers: Seven right-handers, two lefties and Pat Venditte . . . The Angels played without 3B Yunel Escobar, the team’s leadoff man and one of the top hitters in the American League. Escobar’s left hand was bruised from being hit by the first pitch of Saturday’s game . . . For the series the Angels won 2-1, they had 12 first-inning runs, including six homers.

Felix Hernandez get another shot at the Texas Rangers on a 1:10 p.m. holiday start Monday. Texas (82-55) has had the Mariners’ number all season — 11-4 head-to-head. The Rangers have usually gotten under Hernandez’s skin. Hernandez (9-5) has lost to Texas twice and has a career record of 17-23 against the Rangers. Texas, with 23 wins, is the only team to beat Hernandez more than 16 times. The Rangers counter with LHP Cole Hamels (14-4, 2.91 ERA).