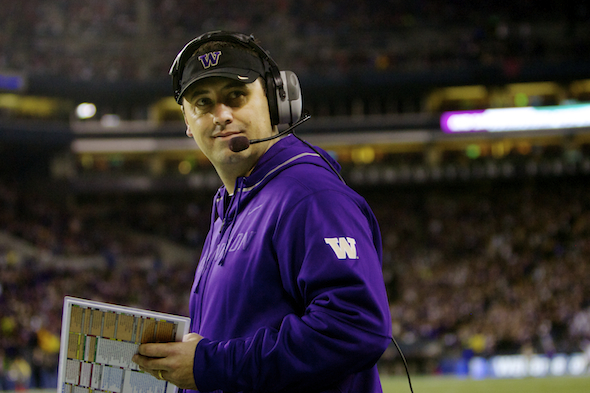 Steve Sarkisian, who coached at Washington from 2009-13, has been hired at Alabama. / Drew Sellers, Sportspress Northwest

Sarkisian, the second fired former USC head coach on Alabama’ staff (also Lane Kiffin), interviewed following the Tide’s 52-6 season-opening win over the Trojans. Both were assistants under Pete Carroll at USC when the Trojans dominated the Pac-10.

“We talked about it really quite a while ago, and I told him that we’d love to have him as part of the organization,” Saban told the Associated Press. “He’s going through some personal things to get himself in a very positive position and wants to continue to do those things in the future and professionally. He loves coaching. I’ve known him for a long time and he’s a very, very good coach.

“To make a contribution to being an analyst here and having some input in some things that we can do better, I think, will be a real positive for our organization.”

Then-USC athletics director Pat Haden axed Sarkisian after he showed up at a practice in no condition to supervise it. That followed a drunken display a few days earlier at a booster event, where Sarkisian appeared to be intoxicated while giving a speech.

Sarkisian later sought treatment for alcohol abuse. He sued USC for $30 million, arguing that USC  breached his contract and discriminated against him on the basis of a disability. The case is in arbitration.

“We’re going to continue to help him in his program as an organization and we’ll support him when he has an opportunity,” Saban said. “I think he understands the consequences that he deals with professionally if he has any issues or problems. We’re glad to have him as a part of the organization and hopefully he’ll be able to get back on his feet.”

Sarkisian went 9-4 (won Holiday) in his first season with USC and was 1-2 last year when Haden fired him.

Sarkisian also rejoins another coach from his days at Washington, Tosh Lupoi, now Alabama’s linebackers coach. Lupoi lost his job at UW following an episode in which he was accused of giving more than $4,000 cash to the coach of a Huskies recruit.