Given a 7-0 lead, Felix Hernandez nearly spit up the whole thing before Mariners bats came alive in a six-run sixth to stun the high-flying Texas Rangers. 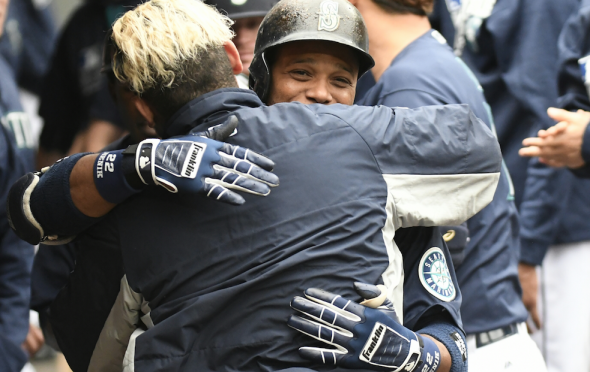 The Mariners’ bats came alive, on a day Felix Hernandez needed them, as Seattle pounded the AL West-leading Rangers 14-6 Monday afternoon at Safeco. The 14 hits weren’t enough to get the Mariners (70-67) back in the pennant race, but it did end Seattle’s five-game losing streak to Texas.

After earlier delivering his 14th home run of the season, RF Franklin Gutierrez came up with the decisive hit in the sixth with a bases-loaded, two-run double, part of a six-run inning. Having given up most of their 7-0 lead, the Mariners turned an 8-6 game into a laugher.

Hernandez survived a five-run third inning to get through 5.2 innings when he didn’t have his best stuff. The Mariners gave him a 7-0 advantage after two innings, but Hernandez nearly let it slip away. In the end, he improved to 10-5 after allowing six runs off six hits. He walked four and had just three strikeouts, his lowest total since coming off the disabled list.

Gutierrez (3-for-4 with a double, homer and 4 RBIs) was the star, but he had plenty of help. 2B Robinson Cano hit his 32nd home run with a two-run shot in the first inning. 1B Dae-Ho Lee added two hits and three RBIs. Perhaps the most improbable shot of offense came from C Jesus Sucre, who went 3 for 3.  Sucre is 4 for 6 in his career against the Rangers ace Cole Hamels.

“It’s not a secret we’re not having the best record against left-handed pitching. It’s important for us to do our job, get on base and play our game.” – Gutierrez, who combined with fellow right-handed platoon man Lee to go 5-for-9 with seven RBIs

Hamels’s past two starts have come against the Mariners, resulting in 14 hits and 13 earned runs over six combined innings. Hamels went into his Aug. 30 start against Seattle with a 2.67 ERA. After Monday’s 1.2-inning performance, Hamels has a season ERA of 3.25 . . . C Mike Zunino has been on the bench to open each of the past two games. Zunino, who came out of the gate on fire after being promoted from Triple-A around the All-Star break, is in a 2-for-28 slump . . .  The Rangers have beaten Felix Hernandez 23 times, more than any team, by a lot (Oakland, at 16, is second). Texas (23-18), the Chicago White Sox (5-4) and the Washington Nationals (1-0) are the only teams with winning records against Hernandez . . . Texas reliever Keone Kela graduated from Chief Sealth High School and spent one season at Everett Community College.

LHP James Paxton and his dangling-chad fingernail will try to slow down the Rangers Tuesday night at 7:10 p.m. in the series’ second of four games. Paxton (4-5, 3.83 ERA) was scheduled to pitch Monday but got an extra day off to let his fingernail heal. Texas will counter with lefty Martin Perez. Perez (9-10, 4.30 ERA) Wednesday tossed six scoreless innings in the Rangers’ 14-1 win over Seattle.