The Seahawks begin the 2016 season Sunday against Miami with 15 rookies. That’s a lot, but isn’t necessarily an impediment to reaching the Super Bowl. 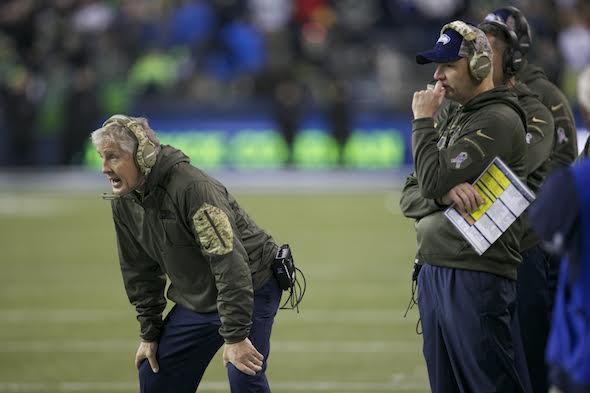 When the Seahawks made their cuts to a mandatory 53 players, the always-subject-to-change roster featured 15 rookies, including seven undrafted free agents. According to an examination of all of Seattle’s opening-day rosters by The Seattle Times, that constitutes the second-most in franchise history, trailing only the 1976 opening-day roster, which, predictably for an expansion team, featured 17.

Pete Carroll has taken the Seahawks to the playoffs five times in six years. His only miss came in 2011, when his roster was top heavy with rookies (11). Now he’s going to be dealing with 15, a fact that seems to concern him not an iota.

“It’s kind of like a freshman class, isn’t it? I think it’s a good statement about what we’re doing and we believe in young guys,” Carroll said earlier this week. “We believe young guys can play. We committed to that a long time ago and it’s worked out fine for us. We’ll see how these guys do. We’ll have to wait and see, but it’s a good statement of the process and getting guys in here that can compete and battle for spots. I’m happy about it, I’m not worried about it at all.”

While there is a difference between the number of rookies on an opening-day roster and the actual number used during a season, the question is whether the Seahawks have too much inexperience for their own good. As one talk show host put it this week: “15 rookies on a rebuilding team, such as Cleveland, doesn’t seem excessive. But 15 on a Super Bowl contender is too many.”

The following are the teams that used the most rookies en route to a Super Bowl appearance:

So if the Seahawk reach Super Bowl LI, they would become the eighth to do so with at least 13 rookies.

Not on the list, but close to it, are the 1985 Chicago Bears, a team many believe is the best in pro football history. Da Bears used 11 rookies. The Pittsburgh Steelers launched their 1970s dynasty in 1974 with 11 rookies and averaged nine on each of their four Super Bowl-winning teams.

Since Seattle appeared in its first Super Bowl Feb. 5, 2006 (Mike Holmgren used nine rookies), six of the past 10 Super Bowl winners played 10 or more rookies, with Pittsburgh (XLIII) and the Giants (XLVI) both using 12.

Counting all Super Bowl winners, 12 of the 50 used 12 or more rookies and 17 of 50 played 10 or more. Thirty-two of the 100 Super Bowl teams featured 10 or more first-year players. No wonder Carroll isn’t concerned.

“The sooner they start contributing and feeling the confidence that they can do something, the faster they develop,” Carroll said. “That’s really how it’s been. Then somewhere around half of the season, you’ve got guys that are really comfortable playing. You’ve brought your young guys into the fold.”

The key is to get the rookies producing as soon as possible.

“That’s already started, it’s underway,” he said. “We want our guys to fit in as early as we can. So we try to find things that they can do well and get them on the field and let them contribute to us.”

Carroll isn’t that much farther out on the limb.