As the national anthem controversy rolls on, the Seahawks aren’t using the word protest, said WR Doug Baldwin. Coach Pete Carroll said he’s proud of the players’ willingness to work through the issue. 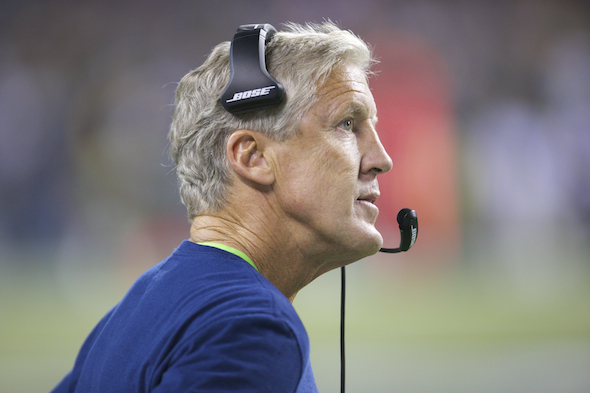 Pete Carroll is proud of his players working through the anthem controversy. / Drew McKenzie, Sportspress Northwest

The start of the NFL season always seems to have sidebar drama. This year, it’s the national anthem as protest vehicle. And the Seahawks appear to be the lead enterprise in attempting to develop an appropriate response. Making scrutiny more intense is that Sunday is the 15th anniversary of the 9/11 terror attacks.

“They’re going to be very thoughtful, very respectful, honoring that which should be recognized,” coach Pete Carroll said Friday after practice. “I’m just proud of the way they’ve gone through it.”

Carroll and the players were largely mum on specifics, although sitting through the anthem, as CB Jeremy Lane did before the final preseason game, in support of a similar gesture by 49ers QB Colin Kaepernick, seems unlikely.

ESPN.com reported, and a team source confirmed, that players, perhaps along with some coaches and staff, will line up arm in arm.

One public hint came from a tweet by WR Doug Baldwin, who wrote Thursday: “To express a desire to bring people together, our team will honor the country and flag in a pregame demonstration of unity.”

By Friday, Baldwin rejected the notion that a protest was part of the plan.

Asked about the gesture Thursday, QB Russell Wilson, the master escape artist, pivoted away from an answer.

“Right now we’re just focused on the Dolphins,” he said. “That’s too far down the road right now. I’m just trying to get ready, so that’s kind of our focus right now.”

Carroll indicated the the discussion was serious.

“These are just young men who are growing and they’re trying to figure out the world themselves, too,” he said. “They want to try to make sense of how they can have impact and affect others.

“We’ll see on the weekend that I think they’re going to do a very good thing.”

Asked who was leading the discussion, Carroll said, “There’s a bunch of guys. We have so many guys that have a voice on this team. What has been remarkable is the interaction and care that they have extended to one another with different positions. This has been a tremendous process.”

Asked how he has been involved, Carroll said, “This is a personal deal. I have been involved to whatever I can be, to mentor or whatever, answer questions and try to give insights. We have a wide-open conversation with our players and it’s customary to be in that circle with a bunch of different guys.”

And of all teams, why the Seahawks?

“I think it’s this collection of people,” he said. “I think it’s also the fact that they have been recognized as individuals who can stand up for themselves and make choices and do the right thing, and be very effective in the areas that they want to work. They have a big conscience and they care.

“I don’t know what’s going on anywhere else. I just know about us. We’ve been together for a long time and we have exceptional leadership and very bright kids.”