Thiel: Seahawks’ Baldwin is drama king for a day

The Dolphins should have won this game, but the Seahawks prevailed 12-10 on an emotionally significant day led by Doug Baldwin. QB Russell Wilson has a sore ankle, and he could miss a game, a career first. 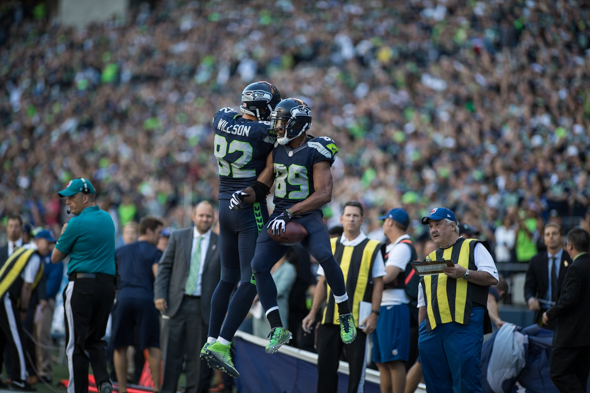 The day was rich in drama: 9/11 anniversary, opening Sunday for the NFL season, America wrestling with itself. Not that we haven’t seen it all before, but perhaps never have they all knotted up together in one time and place.

Nowhere were matters more knotty than in Seattle, where the Seahawks, because they are Pete Carroll’s Seahawks, jumped in front of everyone in sports to begin untangling.

They spent a lot of emotional energy during the week stimulating a nationally scrutinized controversy. Sunday, they wove together a non-controversial statement about football and life in America that left them with barely enough energy to prevail 12-10 over a Miami Dolphins team that surely spent its long cross-country flight home searching their gear for a win they knew they had.

Then there was QB Russell Wilson, who went all Willis Reed on 69,012 despairing customers, gimping through a perilous final drive on a bad ankle. The drive required two fourth-down conversions and 14 plays, the final of which was an audible to a pass that caused WR Doug Baldwin to gasp.

“What are you doing?” Baldwin said he recalled thinking at the moment. Which was an appropriate thought for most everything in the week.

Wilson floated a low-percentage, fade-route pass on a perfect parabola that only Baldwin was in position to catch, which he did, an inch inside the end zone’s boundary. It proved to be the game-winner with 35 seconds left.

Since Baldwin was a lead figure in the national-anthem demonstration, posting a video Saturday elegantly explaining the franchise-wide appeal for unity instead of racial division, his spectacular catch seemed a Hollywood-penned tidiness to the week-long intersection with real life.

So let’s start at the anthem.

As a flag nearly the size of the field was unfurled, Seahawks players linked arms with each other as well as coaches and sideline staffers to create a single line more than 70 yards long. No one was sitting or kneeling — except on the opposite sideline, where four Dolphins, including RB Arian Foster, knelt in the protest form initiated by Niners QB Colin Kaepernick the previous week.

“We wanted to do something together as a team,” Baldwin said. “We want to honor those lives that have been lost 15 years ago on this tragic day, and also honor those who have sacrificed their lives for the freedom that we cherish.

“At the same time, we’re standing for those lives that are fought for that freedom. We want to ensure freedom and the security of justice for all people. It’s a situation for us where you’ve heard us. The message is very clear, you’ve heard us.

“Now we’re asking you to listen to our message. It’s as simple as that.”

The gesture avoided the perceived flag-disrespect issue that rankled many fans and probably the NFL honchos and their skittish corporate sponsors. But did it convey the anger that turned Kaepernick into a hero for the marginalized?

“In this locker room of 53 guys, we believe that, as a team, the only way we’re going to win the Super Bowl is if we do it together. That’s where we arrived. Fortunately enough, we’re in the greatest country that’s capable of doing it. We’ve come so far, but that doesn’t mean that we rest, when we have so far to go.”

Baldwin’s eloquence was matched on the field by his substance. He had nine catches for 92 yards, including two catches for 31 yards, both for first downs, on the final drive that preceded Seattle’s only touchdown.

Baldwin’s resolve was exceeded only by the grit of Wilson.

On Seattle’s first possession of the second half, Wilson was fleeing from Miami dreadnaught Ndamukong Suh when he began to go down and Suh, accidentally but forcefully, stepped on the QB’s right ankle. Wilson hung in for three more plays as the drive stalled.

As he was treated on the sideline, there was sufficient concern to have rookie backup QB Trevone Boykin warm up. But Wilson insisted he could go. He played the rest of the game diminished, but still was able to throw from the pocket.

“You could tell it was bothering him,” Baldwin said. “But you could just see the process in his head — the mental process that you have to go to in order to push out the pain. You could see that going on, through his body language.

“Fortunately enough for us, he was able to do it.”

Wilson, never one to admit to discomfort, made an admission of the obvious — he was hurting.

“It’s a little sore, but I’ll be all right — with a little ice and a little prayer and some treatment,” he said, smiling. “It was just a freak accident.”

He managed to interject a little humor.

“I was pretty limited,” he said, “but I was telling coach Carroll and some of the trainers: ‘When I’m 43, 44, 45 years old and still playing, that’s probably what I’ll look like out there.'”

In fact, he looked like a Seahawks quarterback of old: Dan McGwire, the immobile brother of Mark McGwire and one of the great personnel mistakes of the Ken Behring era.

After the ankle was heavily taped, Wilson narrowed the playbook to handing off or throwing from the pocket. There wasn’t a chance he was going to sit.

“I was (playing), no matter what,” he said. “That’s just my mentality; whatever it takes.”

No one was offering pity; he threw a career high 43 times, completing 27 for 258 yards, including six for nine on the final drive. He even scrambled for four yards in the drive, throwing a scare into the house.

“When I looked and saw him running,” Baldwin said, “all I could think of was for him to get down.”

Wilson survived, as did the Seahawks, thanks largely to a defense that, until a late fourth-quarter drive of 86 yards to a touchdown, held the Dolphins to 145 yards of offense.

Seattle was aided greatly when the Dolphins dropped a certain touchdown reception, had a field goal blocked and chose to pass up a field goal for a fourth-down run that failed.

Just enough was done to allow the Seahawks to limp away with a victory.

Now they go to Los Angeles, for the first time since 1988, to Carroll’s old Coliseum haunt to attempt to win with perhaps a rookie quarterback against a pass rush more formidable than they saw Sunday. 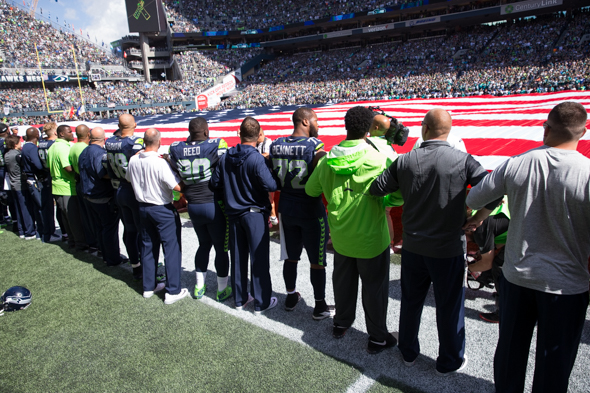 Seahawks players, coaches and staffers locked arms during the national anthem as a gesture of unity. / Drew McKenzie, Sportspress Northwest