Seahawks O-line pulls it together for final drive

After a harrowing afternoon, the remade offensive line finally pulled together for Seattle’s lone touchdown. But QB Russell Wilson was hurt on a sack, leaving doubts ahead of another serious test. 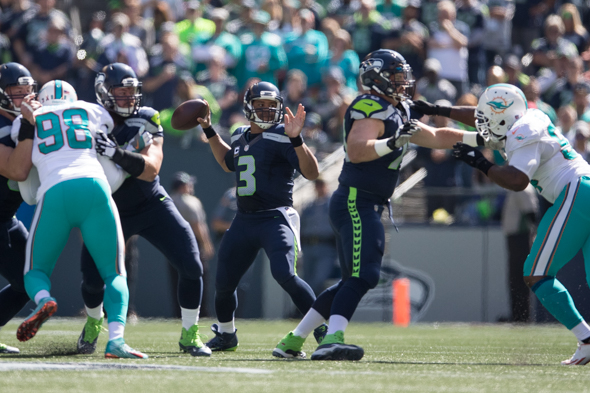 Russell Wilson was a busy man Sunday, scrambling often as his O-line struggled to protect him. / Drew McKenzie, Sportspress Northwest

The Seahawks stumbled across the finish line ahead of the Miami Dolphins, 12-10, but the rebuilt offensive line barely survived. Seattle allowed three sacks and nine quarterback hits, one leading to an ankle injury for QB Russell Wilson.

But they pulled themselves together at the end when in counted most, and it decided the game.

How would Bradley Sowell do replacing LT Russell Okung, who left in free agency? Would the group provide protection for Wilson, sacked 45 times in 2015, the third-highest tally in the league? Would they create space for the running backs to operate in the absence of Marshawn Lynch?

The first quarter didn’t provide promising answers. The ground game racked up a measly 24 yards. Worse, Wilson was sacked on third-and-nine by Williams at Miami’s 16-yard-line, stalling a red zone drive and forcing Seattle to settle for a field goal.

J’Marcus Webb, making a start at right guard for injured Germain Ifedi (ankle) despite playing all of preseason at right tackle, had his hands full with the formidable Suh, who often had free reign.

Webb, who made 13 starts at guard for the Oakland Raiders last season, said the last-minute adjustment wasn’t difficult — apart from the opponent.

“It feels like I stepped back into a place I’ve been before,” Webb said. “At the end of the day you’ve got to set tight, use your hands, and communicate as a unit.”

Wilson spent a good deal of time scrambling out of the pocket. The game’s first turnover came when Wilson was flushed from the pocket and made a poor decision to throw into coverage for an interception after being hit by DE Jason Jones.

Things got hairy in the third quarter. On first down, Suh beat RT Garry Gilliam inside and chased Wilson out of the pocket. Wilson spun to evade Suh, but leaned back. Suh’s momentum caused him to step on Wilson’s ankle, awkwardly and unintentionally, pinning it to the ground as Wilson crumpled. Wilson had the ankle re-taped but struggled through the remainder of the game.

On the first play of the fourth quarter, LG Mark Glowinski was blown up and pushed into Wilson, who tossed a sloppy lateral toward Christine Michael. But the ball tumbled away into the hands of the Dolphins.

With 4:08 remaining, the Dolphins finished a 7-play, 86-yard drive with a two-yard Ryan Tannehill draw play for a touchdown and a 10-6 lead. The Seahawks line knew it had to own the final four minutes.

“Go down and score,” Gilliam said. “We waited long enough, let’s go. We know our business, make our plays. Block, catch, run, simple, keep it simple. Everybody was saying it. We knew what it was.”

Finally, things clicked in the trenches. They ground their way downfield over the course of 14 plays. They created space for RB Christine Michael and Thomas Rawls, and held off the Miami pass rush while Wilson, his mobility limited, stayed in the pocket and zipped quick passes.

Twice, Seattle converted fourth downs. A seven-yard dive up the middle by Michael on fourth-and-one was soon followed by a fourth-and-four short pass that WR Doug Baldwin that turned into a 22-yard gain.

“When you get in that situation in the NFL, that’s where you earn your money right there,” said Sowell. “You’ve got to block, you’ve got to give it your all. We were just hanging on as hard as we could, and they had their ears pinned back and they were coming. We knew who we had back there, so he made the plays we needed to make.”

In the final minutes, the line held long enough for Wilson to float a touchdown pass to Baldwin and give Seattle a 12-10 lead. Evidence of weakness persisted, however, when the right side of the line collapsed during the PAT, leading to a block.

“We’re OK,” Carroll said. “It was a good first outing. That’s about as high-powered a bunch of guys as we’re going to face —  until next week. It was a great start for those guys to get through it.

“It was a lot of pressure on those guys. (The Dolphins front four) are good players. But, for the first game, I liked the way we finished.”

Carroll hopes Sunday’s stumbles were fleeting missteps in a new season as they prepare for the Los Angeles Rams and the meanest pass rush in pro ball.

Working out the kinks against two of the best pass-rush units in the game is a formidable task. They are 1-0 after the first test, but they face the additional trial of having Wilson limited in mobility, if they have him at all, when Carroll returns to his LA Coliseum haunts.