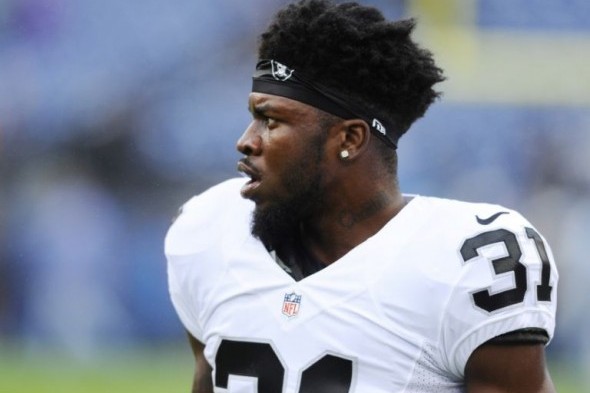 The Seahawks added Neiko Thorpe to the Legion of Boom Tuesday. / oaklandraiders.com

Thorpe played in 36 games for the Kansas City Chiefs and Oakland Raiders since 2012 and will assume Simon’s former role in the secondary. The Seahawks drafted Simon in the fifth round in 2013, but he has played in only 11 games due to a litany of injuries. Simon, in the final year of his four-year rookie contract, played only one game last year because of a foot injury.

“He’s an incredible athlete,” CB Richard Sherman said of the 6-foot-3, 202-pound Simon during training camp. “He’s going to be a great ballplayer. I continue to stand by what I’ve always said — he’s going to be better than me by the time it’s all said and done. The kid’s a player, he just needs to put it all together and hopefully he can stay healthy and it’ll be a fantastic year for him.”

The Seahawks apparently determined that Simon would be unable to do that. He made the 53-man roster, but had a knee problem and was not on the active roster Sunday for the season opener. He was not waived as injured.

He also offered a cryptic tweet last week suggesting he wasn’t fitting in:

Thorpe, who entered the NFL as an undrafted free agent, spent the past two seasons with Oakland but was waived in the roster cutdown to 53 10 days ago. He signed a non-guaranteed, second-round tender worth $2.533 million last off-season, but was beaten out by Dexter McDonald for the Raiders’ fifth cornerback slot.

An Auburn alum and former teammate of Cam Newton’s, Thorpe will likely spend the majority of his time playing on Seattle’s special teams.

The 32-year-old Tukuafu, who scored two touchdowns last season (one rushing, one receiving), was released when rosters were pared to 53 players, in large part because he would have been owed a guaranteed $760,000 if he had been on the roster for the season opener against the Miami Dolphins. By cutting him and bringing him back, the Seahawks do so with the luxury of a non-guaranteed deal.

Tupou, a graduate of Archbishop Murphy High School in Eveerett, played only briefly in Seattle’s 12-10 win over Miami last Sunday.

The Seahawks also made a number of moves with their practice squad Tuesday, signing QB Jake Heaps, DT Tylor Harris and OL Michael Ola. They also terminated the contracts of WRs Kasen Williams and Rodney Smith and DT Justin Hamilton.

Williams, like Tupou, attended UW. A graduate of Skyline High School and a one-time Parade All-America selection, Williams had hamstring injuries throughout the preseason. He signed onto the practice squad last week.

The Seahawks (1-0) play their first road game Sunday in Los Angeles against the relocated Rams (0-1). Kickoff is slated for 1:05 p.m. on FOX.