After 15 years and 347 appearances with the Seattle Sounders, Zach Scott will retire from pro soccer when the season ends. 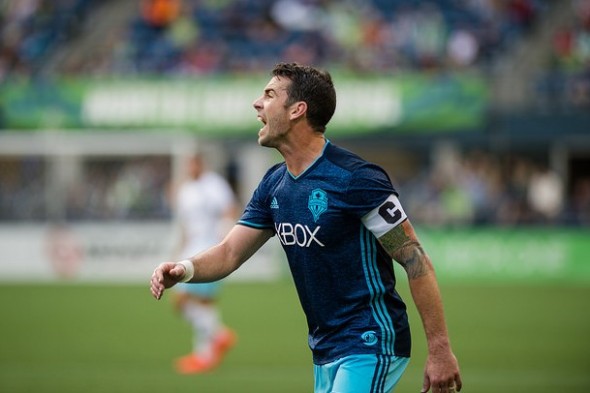 Zach Scott has been a key part of the Souners through two iterations. / Jane Gershovich, Seattle Sounders FC

“Mr. Sounder” has decided to hang up his cleats.

After 15 years with the Seattle Sounders, Zach Scott will retire at the end of the MLS season, first reported by the Seattle Times Wednesday. Scott, 36, has made 347 appearances for the Sounders in their USL and MLS incarnations, and will be remembered for fighting his way to a roster spot year after year.

“I’m going to miss it, but soccer is always going to be a part of my life,” Scott told reporters Thursday. “Now I’ll get the opportunity to be more a part of (my children’s) games and coaching them and watching them grow as players.

“It’s cliché, but (I’m going to miss) the guys the most. It’s a great group of guys. As much as we have turnover from year to year, we always seem to have personalities that are fun to hang out with. But the next step I’m excited for as well.”

Scott’s unlikely saga of surviving Seattle’s roster turnover began in 2002, when the recent Gonzaga graduate, a native of Hawaii, showed up to Memorial Stadium at Seattle Center, hoping for a shot at joining the Sounders of the USL A-League.

“It was a hectic time,” Scott recalled. “I was in the process of graduating from college and going through student teaching.  Then traveling on weekends and coming back at two in the morning, sleeping for four hours, and going into a classroom again.

“But it’s something I wouldn’t change at all because I wanted to make the jump so bad, knowing it was there, especially in Seattle.”

During the open tryout, Scott caught the attention of the coaching staff, including then-head coach—and current interim head coach—Brian Schmetzer.

“I have to give Chance Frye, a former Sounder, some credit,” Schmetzer said Thursday. “I was sitting up there with (assistant manager) Dick McCormick, and Chance and a bunch of guys. It was a little ragtag. What stood out in that game in Memorial Stadium, which is a small field anyway, is Zach was crushing every single header.

“There wasn’t a lot of good soccer played at those open tryouts, so the goalkeepers would kick the ball down the field. Zach would just get up and crush these guys. Chance looks at me and goes, ‘You’ve got to sign that guy, just because he wins every single header.’”

Scott’s game lacked technical refinement, an issue when Schmetzer sent him to play that same year for his brother, Andy, for the Cleveland Crunch of the Major Indoor Soccer League. Two months later, Scott was sent back, his game not up to par for the fast-paced  indoor style.

“He was overly determined to make sure that doesn’t happen again, and he worked on his passing, his first touch, for the next years and still even today,” Schmetzer said. “He is now one of our best passers not only in his technique but in his decision-making. He learned that from a not-great moment in his career. He was always able to figure stuff out and make himself better.”

What followed was a decade and a half of relentless training and positive contributions on the pitch through force of will. Every year, Scott was near the top of the list in the discussion of who wouldn’t be back. Every year, he defied expectations, and later, age, to prove his detractors wrong.

Soccer has not made Scott a rich man. His wife, Alana, has been the main breadwinner to support their family while Scott has received little more than the league minimum for his long service to the club, living his pro dream.

Scott played the final four months of the past season on a broken foot. When he was cut at 35, most figured that it had been his last ride. Come spring, though, there he was at training, invited back for another tryout while Román Torres recovered from an ACL tear.

Even Scott’s detractors have to allow themselves a chuckle, watching him refuse to go away until he had the chance to do it on his terms.

Scott’s intention is to walk off the field he loves with head held high, having proven to himself and all who watched that he had what it took to not only grab a spot and survive the transition to MLS, but to become a respected, integral part of the soccer culture in Seattle.

Scott said he didn’t see a spot in the front office in his immediate future, but he wouldn’t deny the possibility someday.

“I’d love to be a part of some of the stuff they’re doing off the field, the Rave Green Foundation and stuff on the non-profit side,” Scott said. “The team will always have a special place in my heart and I’d never not answer a call if they need my help.”