In a Mariners-rare big game, Felix Hernandez wasn’t up to the task, giving up all the Astros’ runs, while Houston’s Colin McHugh continued his ownership of Seattle. 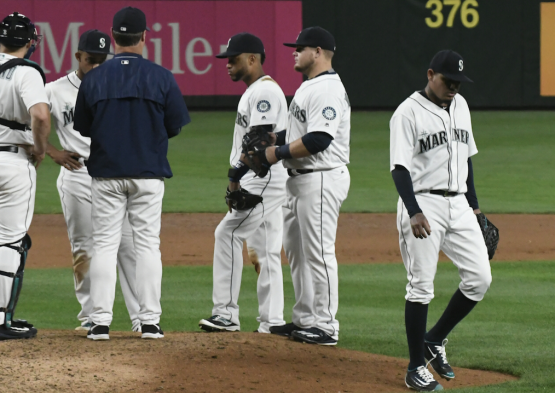 The Mariners’ momentum came to a screeching halt at Safeco Field Friday, as the Astros pounded ace Felix Hernandez while getting another great start from Collin McHugh on the way to a 6-0 win (box). Seattle (78-69) had its eight-game winning streak snapped while falling three games back in the wild-card standings.

Hernandez and the Mariners were already teetering when Houston DH Evan Gattis came to the plate to lead off the fifth inning. Gattis hammered a 1-0 pitch from Hernandez into the visiting bullpen for a 5-0 lead that took the last bit of wind out of the Mariners’ sails. Astros teammate Marwin Gonzalez added a solo shot two batters later, ending Hernandez’s night after just 4.1 innings.

Hernandez hasn’t had many big-game starts in his career, and Friday marked a missed opportunity for the aging ace. The Astros put runners in scoring position in every inning he pitched, scoring in each of his final four innings.

He didn’t get a lot of help (two of Seattle’s three errors came with Hernandez on the mound) but has no one else to blame for this one. Hernandez allowed six runs (five earned) off eight hits while dropping this record to 11-6. It was his second loss since coming off the disabled list in early August, but this one weighed more heavily than most he’s endured over his impressive career at the front of Seattle’s rotation.

Once again, McHugh had his way with Seattle hitters. He allowed two hits over seven scoreless innings to improve to 4-0 against the Mariners this season and 9-3 against Seattle over his career. McHugh has a 1.36 ERA over the four starts, which looks even more disheartening considering he’s 7-10 with a 5.30 ERA against everyone else. The Mariners didn’t get a hit until the fourth inning, and managed two more the rest of the way.

Two of the teams battling Seattle for the two wild-card spots, the Tigers and the Yankees, lost Friday night. Baltimore beat Tampa Bay on a game-ending play at the plate, while Toronto beat the Angels to hold firm atop the wild-card standings. Seattle dropped to three games behind the Orioles and Blue Jays; the Astros are closing in at four back.

“Sometimes you get a clunker like that. Not exactly what we were looking for tonight, but it does happen . . . We’ve still got a lot of ball left to play, we’re still in a very competitive spot, but that’s just not what we wanted to see.” – Mariners manager Scott Servais

“Felix pitches to areas that he wants you to chase. We were very good with our game plan to get pitches up and over the plate. Starting with getting a couple runs early with the bunt and Marisnick got the big double. We didn’t chase a lot tonight and if you don’t chase with him and you make him bring the ball in the strike zone, he’s human again.” — Astros manager A.J. Hinch

Those $8 seats offered by the Mariners to celebrate their eight-game road winning streak resulted in 30,178 fans – the most at Safeco Field since the finale of the Yankees series  Aug. 24 . . . With 1B Adam Lind still battling a sprained finger, rookie Dan Vogelbach was in the lineup for the third time Friday. Vogelbach struck out all three times he went to the plate  . . .  Houston IF Alex Bregman, who strained his hamstring in the final game of the Astros’ last series, is not expected to be available for the three games in Seattle. 2B Jose Altuve, who strained his oblique muscle in the same game, was in Houston’s lineup . . .  Before the game, the Mariners handed out lifetime achievement awards to Howard Lincoln and John Ellis – hold the applause, please – and had Ellis throw out the first pitch.

The Mariners’ run toward playoffs continues with LHP James Paxton on the mound. Paxton (4-6, 3.97 ERA) is scheduled to make his fifth start since taking a line drive off his elbow Aug. 7, which is also the last time he earned a win. Houston RHP Mike Fiers, the Astros’ scheduled starter, has never beaten the Mariners. Fiers (10-7, 4.64 ERA this season) has pitched against Seattle twice in his five-year career.