Thiel: Carroll on other side, but still LA’s man

Pete Carroll had an awkward beginning at USC and an awkward end, but he had a tremendous impact on football and they community that he revisits this weekend as coach of the Seahawks. 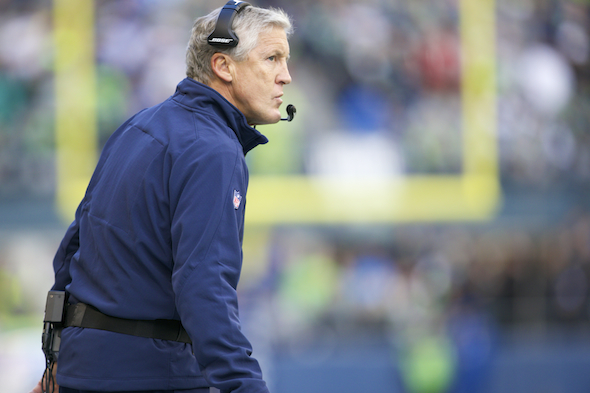 Pete Carroll is back in his once and former kingdom this week. / Drew McKenzie, Sportspress Northwest

LOS ANGELES — Say what you will about the NFL’s inept meanderings through social issues. The most successful sports enterprise in America does know theater.

Bringing back to Hollywood the Rams after 21 years and Pete Carroll after seven years, in the same football game? Even scriptwriters for “Celebrity Apprentice” would cringe at the corny implausibility.

But here we are, the relocated Rams and the Seahawks’ reinvigorated Carroll, at 1 p.m. Sunday in the revered Los Angeles Coliseum (pop: 92,000). What a thing.

Both entities left LA amid controversy and bitterness. Now they return, hailed.

Well, for sure the former St. Louis Rams will be hailed, if an NFL-record sale of 70,000 season tickets in four months means anything. Carroll nominally will be the villain, because he coaches the visitors, and because he left his job at USC in 2010 just before NCAA sanctions hammered the Trojans back to the pre-Carroll era of average-ness, where they remain (Alabama 52, USC 6 two weeks ago).

But that period from 2001 to 2009 — seven Pac-10 titles, two national championships — cannot be forgotten. In the absence of pro sports team success, Carroll — glib, energetic, handsome, charismatic and hugely successful — was known as the King of LA. It is not forgotten.

“The whole aura of what he built and the championship football that he’s built — it’s going to be one of those things that’s going to be remembered in the history of college football. He built something really special.”

That is how Carroll chooses to remember it.

“Nothing but fun memories and fun,” is how he put it this week. “We had a great time down there. We were so lucky to be there. SC was such a blast. We had so many good times and were able to connect with so many people. It was just a treasure. It’s the fondest.

“We’ve been gone quite a while now, but feel so connected to all the sports that are down there and what’s going on in the community.”

Omitted from Carroll’s recall was the non-fun of NCAA sanctions, over which he remains defiant.

“Had I known what was going on and what was going to come around, I never would have been able to leave,” Carroll said on a conference call with LA reporters this week.”I know there are a lot of people with different opinions about that, because they don’t know.”

Another aspect of non-fun stuff was the beginning of his Trojans career. Given his subsequent success at USC as well as with the Seahawks, it seems absurd now to recall that, after then-athletics director Mike Garrett in December fired Paul Hackett  (cumulative 19-18 mark), Carroll was fourth on the list of candidates.

In frustration, Garrett picked Carroll, who hadn’t been in college coaching since 1983. The choice was met with much skepticism for a two-time loser at the NFL level.

“Oh, no, the Trojans did it again,” wrote Bill Plaschke of the Los Angeles Times. “Oh, no, they hired somebody non-traditional to lead a tradition.”

Carroll this week seemed amused at the recollection of the dismay.

“Oh, it was obvious and it was heavy,” Carroll said. “They even waited a few extra days to try and hopefully quell the storm, because they knew it was coming. It didn’t do very well.

“I have had a lot of people over the years that say, ‘Hey, I was one of those guys that said you were a bum and weren’t going to make it — come back.’ I kind of took some pride in that, that we had proved it to them. There was a lot of scrutiny in all ways. At the time, I didn’t care and I didn’t worry about that at all, because they didn’t know who I was, or what I was going to do. They just had an opinion on it and I had a chance to prove it, which was great. So it worked out OK.”

So it did. Exploiting the absence of the NFL — the Raiders left for Oakland and the Rams for St. Louis, both in 1995 — LA got over its apprehension and fell hard for Carroll. After a 6-6 first season, the Trojans never lost more than two games the next six years, creating a nine-year record of 83-19.

Speculation was persistent that the only way Carroll would leave USC would be to coach whatever franchise relocated to LA, which every year seemed to be a fresh team fighting its municipality for public funds to build a new stadium.

Part of the reason Carroll seemed wedded to the town was his intense involvement with inner-city LA to push back against gang violence that claimed so many young people. In 2003, Carroll helped convene a meeting of the city’s political, legal and social leadership to chart an improved course. What emerged was A Better LA, a non-profit charity tasked with bridging the racial divide.

Carroll had already made his mark when he went door-to-door in the Compton and Crenshaw neighborhoods, doing some talking but more listening. It made him a civic figure beyond the Coliseum.

One of the kids he talked to was Richard Sherman, a talented wide receiver and defensive back from Dominguez High. Although he chose Stanford over USC, Sherman remembered Carroll as unique.

“He did a lot of work in areas that most coaches wouldn’t even go into,” Sherman, an NFL player of some note, said this week. “Areas with a lot of housing projects that he would go into, that I wouldn’t even go into, realistically. People respected a lot of the work he did in the community. They allowed him pretty much a free pass to go wherever he wanted, because he really put his money where his mouth was.

“He met with gang members, community members and community leaders. He also met with police and tried to bridge the gap. He tried to bring people together and come to a solution on the gang issue and violence that was going on in the city. I think people respected that because he didn’t have to. As the head football coach at USC, it’s not your obligation to go back and help that community. He’s not from those streets.

Carroll’s first community meeting was, as is typical with him, unorthodox.

“I got in all kind of trouble because people came from all over the place and I didn’t go through any of the right protocols (at USC),” he said Friday. “I didn’t know what I was doing. We had an extraordinary turnout from the police department, sheriff’s department, community-based organizations, churches, local kids. There, the dialogue started.

“Look where we are now in the country — it couldn’t be more topical. It’s about law enforcement, community work and how to get that together. That’s why you see (Seahawks players) have jumped all over it.”

Once the gang-bangers were over the shock, they started listening.

“They thought I was crazy — they thought, ‘What are you doing?” he said. “Kids in the area that were from troubled backgrounds knew that they were either going to die or they were going to jail. That’s really what they told us.

“You listen to it enough, you realize that was their sense of hope, which was none.”

With the help of volunteers and corporate donations, A Better LA  began to be an influence in LA street culture. Carroll, a man of endless words, found that conversation became a virtue when it came to getting opposing sides to come together.

“If there was anything that was done, it was to help people talk,” he said. “And feel comfortable about coming back together and talking again and again. Where they started to generate a familiarity, that’s where the caring was demonstrated. That’s where I think the real power comes from.”

Carroll is back in town, and people are talking about him again. But it’s mostly about football. When he flies back to Seattle Sunday night, he hopes the the fractious metropolis continues to talk about more important things.