The Seahawks failed to generate any offense and fell to the Rams at the Los Angeles Coliseum. Seattle has lost three in a row and four of five to its NFC West rival. 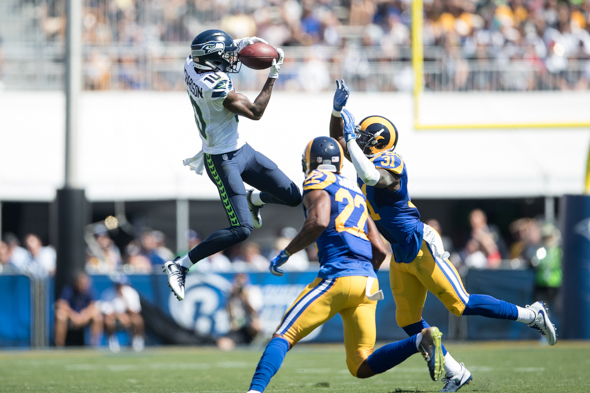 Embarrassed Monday night by San Francisco (28-0), the transplanted Rams continued their mastery of the Seahawks Sunday with a 9-3 victory in front of 91,046 at the Los Angeles Coliseum (box). With Russell Wilson impaired by a high ankle sprain, Seattle (1-1) failed to generate sufficient offense, self-destructed in a myriad of ways, and dropped its third in a row and fourth in five games to its most irksome NFC West rival.

Greg Zuerlein kicked field goals of 39, 28 and 47 yards while Seattle could only manage a 23-yarder from Steven Hauschka. Wilson, who sprained his right ankle in Seattle’s 12-10 season-opening victory over Miami, failed to throw a touchdown pass for the first time in 17 regular-season games, although he had the Seahawks in position for another last-minute win.

Trailing 9-3 with 1:53 remaining, the Seahawks started the final drive on their 12-yard line. Wilson immediately made Seattle’s hopes soar when he hooked up on a 53-yard completion with WR Tyler Lockett at the Rams’ 35-yard line.

But on third-and-10 following an incomplete pass, a false start and a five-yard completion to WR Doug Baldwin, the afternoon blew up for coach Pete Carroll on his ballyhooed return to Los Angeles, where he succeeded at USC.

Flushed from the pocket to his right, Wilson found RB Christine Michael across the middle near a first down. But after making the catch, Michael fumbled and the Rams recovered. That deprived Seattle of another down and a shot at victory — not the most improbable outcome, given Wilson’ 19 career fourth-quarter comebacks.

If the Michael fumble sealed the victory, Seattle’s poor, game-l0ng field position, plus a rash of penalties, certainly contributed to the need for a miracle finish. The Seahawks did not start any of their 10 drives beyond their own 25-yard line (average starting point was the 17) and were flagged 10 times for 114 yards, including three offensive pass interference penalties that Carroll described as “surprising and unacceptable.”

Wilson completed 22 of 35 for 254 yards without a touchdown or an interception and finished with a passer rating of 84.7.  But he could only coax first downs on four of 13 attempts on third down.

RB Thomas Rawls, who departed in the first half with a leg injury of undetermined severity (not considered serious), carried seven times with no luck at all. The Rams swamped him for a -7 yards.

Lockett, who left in the first half after banging his knee, returned in the second and wound up with four catches for 99 yards. TE Jimmy Graham caught three for 42 yards.

Baldwin, who caught two passes early, was virtually blanked thereafter. He was hurt when he legs were rolled on a play away from the ball. He finished with three for 20 yards. Baldwin moved into sixth place on Seattle’s career list with 286 receptions.

The Seahawks defense failed to generate a turnover for the second consecutive week, but they have allowed 19 points in their first two games, an average of 9.5. Last year, Seattle led the NFL in scoring defense at 17.3 points per game.

LB K.J. Wright led Seattle with nine total tackles, and the Seahawks had three sacks, two by DT Frank Clark and one by DT Michael Bennett.

“To come out and play like that was a tough day. We got in our own way. I don’t know how we had all those (offensive) pass interference penalties. I thought our defense played really well, but I’m really surprised we could go two weeks and only score one touchdown. I never would have believed that. We were not been able to shift the field position in our own favor and we didn’t get any turnovers. We were not able to overcome that. Those pass interference penalties were crushers. We have to do better. We’re much better than this and we need to show it. We’re going in the right direction but we’ve got a lot of work to do.”–  Carroll

“I have to give credit to my training staff. I wasn’t supposed to be playing for a couple of weeks. We had a chance there at the end and it didn’t work out.” — Wilson

“It’s disappointing not being able to be effective on offense. (Wilson) showed his leadership and character to come out and play through that (ankle). We knew it was going to be a dog fight, and it was.” — Seahawks WR Jermaine Kearse

Rawls had a leg bruise that is not considered serious . . . .Had the Seahawks won, they would have recorded a franchise-record sixth consecutive road victory  . . .  The Seahawks have played 90 consecutive games with a lead, or within one score of the lead, in the fourth quarter . . . Wilson is 4-5 in his career against the Rams.

The Seahawks return to CenturyLink Field Sunday for the first meeting of the season with the San Francisco 49ers  (1:05 p.m. , FOX).