The Mariners, behind starter Ariel Miranda, salvaged a game from the Astros series, and find themselves only two games out of the final wild card spot with Toronto coming to town. 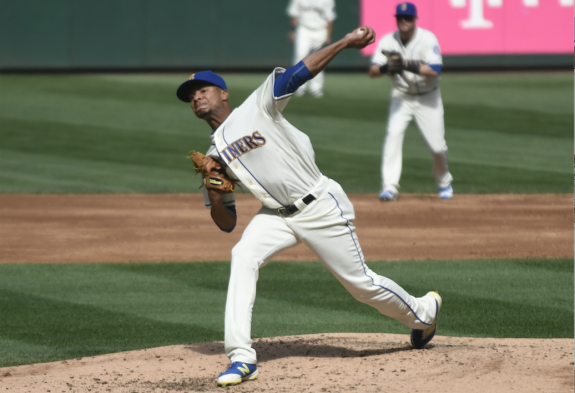 Ariel Miranda had his best career start when it was desperately needed. / Alan Chitlik, Sportspress Northwest

Rookie Ariel Miranda delivered the best start of his young career, and teammate Seth Smith had a pair of homers as the Mariners salvaged the final of a three-game series with a 7-3 win over the Houston Astros Sunday. Seattle (79-70) moved back in front of Houston in the AL wild-card race, and is two back of Toronto for the second wild-card spot.

Having already put Seattle in front 3-1 with a third-inning solo homer, Smith came through again with a three-run shot in the fourth inning. That gave the Mariners a 7-1 lead. Smith had the eighth multi-homer game of his career and his second in Seattle.

Miranda was nearly as dominant as James Paxton the day before, only this time he was rewarded. He improved to 5-1 while allowing just three hits and two runs, on solo homers from George Springer and Carlos Correa, over seven innings. Miranda struck out eight and walked one during his best start since being acquired in a deadline trade with Baltimore.

Veteran Tom Wilhelmsen came on in the eighth and struggled in his second appearance since coming off the DL, while Steve Cishek and closer Edwin Diaz – in a non-save situation – finished it off.

After  just one run over the first two games of the series, the Mariners finally opened up the offense. Smith drove in four runs, giving him five RBIs over the past two games, while 3B Kyle Seager chipped in with a two-run double and Norichika Aoki added two more hits and an RBI to his increasing resume. Since his latest recall from Triple-A, Aoki is 14 for 28.

The Blue Jays’ loss Sunday to the Angels provided some hope, as Toronto goes into the three-game series that begins Monday at Safeco Field with just a two-game lead in the AL
wild-card standings. Baltimore won, maintaining its three-game lead over the Mariners,
but Seattle has to pass only one of those two AL East contenders to get into the playoffs.

“I’m feeling confident right now. I’m grateful for the opportunity to pitch and I’m confident I can help the team.” – Miranda, through an interpreter

1B Adam Lind, who missed five games with a sprained finger, was back in the lineup Sunday. He went 1 for 4 with a fifth-inning single . . . Houston starter Doug Fister was facing the Mariners for the fourth time in his career. Fister, who began his career with Seattle before being traded to Detroit in a deal that brought four players back, went into the game with a 2-1 record and 4.67 ERA against the Mariners. . .  The Mariners go into this week’s series with Toronto owning an 18-11 record against teams from the AL East.

The enormity of the Houston series was only a fraction of what the Mariners will face as they head into a bigger series with Toronto. The Blue Jays have one of the two American League wild-card spots, so Seattle could either make up ground or throw dirt on those postseason chances. RHP Taijuan Walker (6-10 4.28 ERA)  starta Monday’s opener, and he’s been pitching well lately. Toronto will send RHP Marco Estrada (8-9, 3.78 ERA) to the mound Monday and ex-Mariner J.A. Happ (19-4, 3.27 ERA) on Tuesday.