Thiel: Seahawks defense has to make it easier

With QB Russell Wilson limited and the O-line overwhelmed, it falls to the defense to shorten the field with turnovers to give the Seahawks a chance. 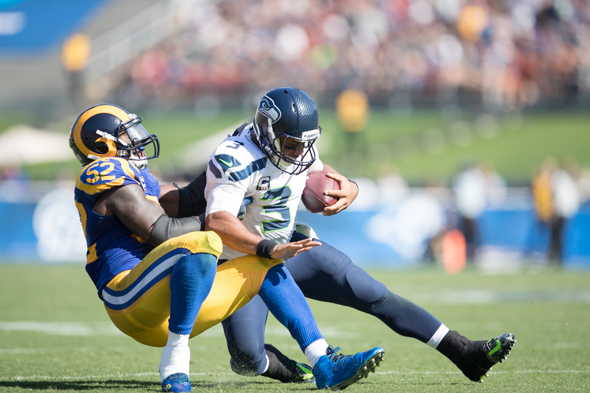 Alex Ogletree had one of the two sacks of Russell Wilson Sunday. / Drew McKenzie, Sportspress Northwest

LOS ANGELES — When a defense permits only nine points in an NFL game, it stretches credulity to ask the unit to do more. But that is the request of the House of Twelves — get a turnover to provide an itsy-bitsy portion of the field so its limpy-skimpy Seahawks offense can score a touchdown.

Scarring the heralded event of the NFL’s return to Tinseltown Sunday after 22 years was the astonishing choice of participants from 1930s football, unable to create the fundamental reward of the game — a six-point score.

For the Rams, well, the failure was sort of understandable — they were shut out in their first game and have been looking for a premium quarterback almost since Roman Gabriel flung it about the fabled greensward in the 1960s.

This is the team with the hottest offense is the second half of the past season. They had QB Russell Wilson, albeit diminished by injury. And it had a good receiving corp bolstered by the active return of TE Jimmy Graham.

If you were startled at the Rams’ 9-3 triumph, you should have heard coach Pete Carroll, whose flabber was gasted as much as anyone’s.

“I never could have thought that we would go the first couple of weeks and not score one touchdown,” he said. He was so flustered — and likely embarrassed in the return to his former kingdom — he forgot that the Seahawks won the opener against Miami on a two-yard touchdown pass to Doug Baldwin with 31 seconds left.

But they still have 15 points to show for two weeks’ work. That is weapons-grade enfeeblement.

Two things stood out, and neither was surprising: The offensive line was no match for the Rams’ ruthless defensive front, and Wilson won’t admit his sprained right ankle bothered him, but it clearly did.

He was asked a half-dozen questions about his limited mobility, and refused to concede the point. But it was plain that he couldn’t push off the ankle normally on throws, and was simply a slower runner.

“I think it wasn’t that difficult,” he said. “I was able to find ways to extend the play on a few plays . . . I felt really good out there. Just being smart. I just got down a few times.

“I had one run, it was third-and-13 or something like that. I almost got the first, but had to get down there because they were about to come and hit me.”

Carroll was a bit more honest.

You could see he was a little bit limited,” he said, “but I thought he did great under the circumstances.”

The Rams were counting on Wilson’s reluctance to run intentionally and ganged up on the rest of the ballcarriers in the first half — 14 yards on 14 attempts, including a minus-seven yards for starting RB Thomas Rawls.

Not since before Marshawn Lynch heard of Beacon Plumbing has Seattle looked so inept at doing what it does best.

Carroll deferred any criticism of the line until he looked at the video, but it was plain that J’Marcus Webb, an injury replacement for first-round draft choice Germain Ifedi, isn’t working out at right guard, and tackles Bradley Sowell and Garry Gilliam are struggling in the first two games against powerhouse pass rushers.

“I thought we protected better today than we have in past games against these guys,” Carroll said. “We’re going in the right direction, but we have a lot of work to do.”

In fact, Wilson was sacked only twice for 15 yards, and he did complete 22 of 35 passes. But they were mostly of the quick-release variety. And as happened against Miami, they had few explosive plays. Only one, in fact — the final-minute, 53-yarder to WR Tyler Lockett that gave brief hope to the Seahawks that another miracle comeback was in the offing.

That was thwarted by a skill-position mistake — a subsequent pass to RB Christine Michael that he fumbled over to the Rams with 45 seconds remaining. That turnover went along with another lost fumble and an incredible three offensive pass-interference calls — a team can go a whole season and get just three such calls — to kill five of Seattle’s 10 possessions.

So it wasn’t all on the O-line. And the three PI calls were of the extremely dubious variety.

But such mayhem is typical in any NFL game. Which brings us back to the defense.

Holding the Rams to nine points and 283 yards of offense, while generally thumping on QB Case Keenum and RB Todd Gurley, is a commendable day’s work. But the defense has yet to get a turnover this season. Carroll was baffled.

“A couple of minus turnover (differentials) in the first two games is not the way we play,” he said. “It’s not our style at all. It’s hard to overcome that — and that’s why the score is so close. Defensively, we can’t be playing football better than we are.”

Turnovers are likely to show with this defense, as they always have. And the offense may get itself together as it did a year ago. But the line’s learning curve cost them games early, including one in St. Louis in the first week.

It leads to the Rams’ curious domination of the Seahawks: They have lost four of the past five to a team that hasn’t had a winning season practically since Merlin Olsen was in diapers.

“I wouldn’t call it domination,” said Rams coach Jeff Fisher. “I would just call it what it is. You know, we match up well against them and strange things happen in these games too.”

The strange thing in this game wasn’t a special-teams trick play/return, or other shenanigans. It was Seattle’s inability to find workarounds to its problems.

The solution may be as simple as Wilson’s return to full speed, or getting Ifedi into a game. But none of it will bring back Sunday’s loss of a winnable game.

Unlike Hollywood, when you mess the audition in the NFL, there are no call-backs.