Wilson, Rawls, Baldwin and Lockett were among the injured in the loss to the Rams Sunday. But Wilson’s sprained ankle loomed largest because of the limits placed on the playbook. 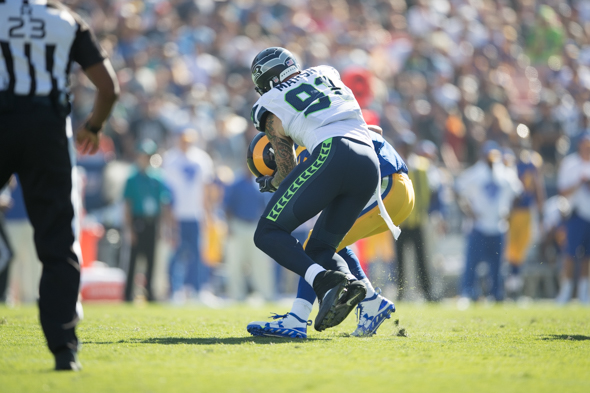 During a sack of QB Case Keenum, DE Cassius Marsh was called for a face mask penalty, but appears to have only his open hand on Keenum’s helmet. / Drew McKenzie, Sportspress Northwest

After two games of tepid offensive production, it’s clear that the Seahawks haven’t adjusted to a Russell Wilson diminished by an ankle injury.

“He looked OK, but he didn’t have the same spring and pop he usually has,” coach Pete Carroll said on his weekly Monday morning radio show on ESPN 710. “He’s not the same guy who runs all over the field. He got out, and did a nice job making a few yards.

“We’ve not been able to do all the things we like to do. We tried to adjust. It changes us a little bit. Other things have to elevate.”

One thing that must rise is the running game, but that may be more difficult Sunday against San Francisco. RB Thomas Rawls made his first start in Los Angeles since he broke his ankle last season and had only seven carries for minus-seven yards before coming out after his shin was kicked.

WRs Tyler Lockett (knee) and Doug Baldwin (knee, back) also were hurt and awaited exams Monday, as did Rawls. Carroll had no health updates on any of them, including Wilson.

“I’m more concerned to see how Russell comes back,” Carroll said. “He was OK coming out of the game; a little sore. He’s off the charts in being able to (recover to play). We were careful with him in practice. He’ll go right after it again.”

After the 9-3 defeat that left the Seahawks with 15 points through two games, the re-made offensive line was criticized again. But Carroll clung to the hope of steady improvement, particularly at right guard where the Seahawks have been missing Germain Ifedi, the first-round draft pick who sprained an ankle a few days ahead of the opener.

“We’re still a new group, and we made pretty good progress,” he said. “We probably protected better than we have against those guys the last couple of years. But we didn’t run the ball quite as well as we have. Those guys will get better. We did practice with Ifedi the whole time, and he drops out two weeks ago. We’ve had to make an adjustment. We made mistakes, a couple of missed calls. The whole thing has to fit together better than it has.

“So much has been the same for two weeks. Really disappointed.”

Carroll said there was “a chance” Ifedi could return Sunday, much depending on how he runs Monday during a workout. Asked if personnel changes on offense were contemplated, Carroll said, “You never know. We have to make some decisions on some stuff to get in a mode that fits us. It’s been three halves since Russell got hurt, so we have to see.”

If Baldwin or Lockett or both can’t go against the Niners — each was out temporarily at the same time Sunday, severely limiting options — the Seahawks may have to look outside the roster for free agent help.

The defense played well, but several Rams drives helped keep the Seahawks pinned deep in their own territory. Last week the average drive against Miami began at the 22-yard line. Sunday in LA, the average drive started at the 17.

“We let let them kind of inch their way out of it, into a midfield punting game,” he said. “Special teams kind of neutralized each other. We didn’t get an edge. It made it kind of a bland game, in the sense of, ‘Where was the big play gonna happen?'”

Carroll lamented over several officiating calls that went against Seattle, including three offensive pass interference calls and a face-mask call against DE Cassius Marsh during a late-game sack against QB Case Keenum.

“The last thing I want to do is blame officials for this,” he aaid. “We had calls in this game that were significant in a game this close. A number went against us, and I was battling for some conscience because they went against us. Those are 40-yard plays.”

Lockett was flagged for contacting his defender just before a completion to him that was nullified.

“There is an allowance for these guys to hand-fight as long as it’s not controlling anybody,” Carroll said. “That was what was going on. The official felt (Lockett) grabbed him and gave an advantage.”

The Seahawks Monday were slapped with a $400,000 fine (Carroll $200,000), docked a fifth-round, 2017 draft choice and had a week of organized team activities taken away next year for violating rules against excessive contact in OTAs last June.

“I’m disappointed, I’m really disappointed,” Carroll said after the penalties were announced. “We’ve worked really hard to try and do a great job. But the league came in and felt like we were in violation. We didn’t quite meet the standards that they want, so this is what happened.”

“I don’t know good information,” said Carroll, “but he seems to feel okay. There will be three or four guys that we have to check out as the days come off this week. We’ll see what happens Wednesday and Thursday. We’ll give them a couple days to get back and see what happens.”