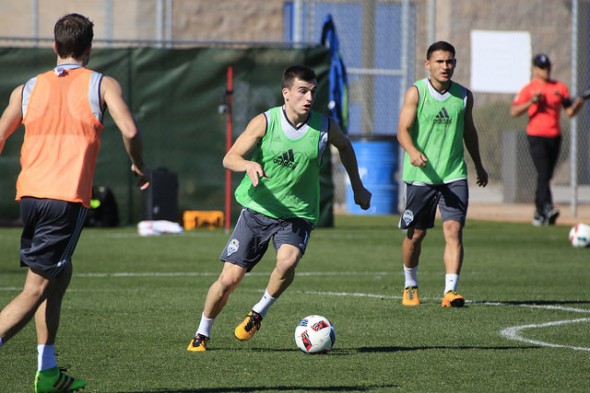 Aaron Kovar said he is ready to play after two months of Legacy inpatient treatment at a rehab for a broken collarbone. / Michael Benson, Seattle Sounders FC

Aaron Kovar, one of brightest young players on the Seattle Sounders, had a miserable summer. A clavicle fractured July 20 punched a hole in what was starting to look like a breakout season for the 23-year-old Seattle native. With six games left in the regular season and the playoffs on the line, Kovar hopes to play his way back to prominence as the Sounders fight for a playoff spot.

Just over an hour into the U.S. Open Cup quarterfinal loss against the LA Galaxy, Kovar dropped back to defend a cross that was swung in from the right side of the field..

“I remember the ball coming in back post and, trying to be a hero, I go up for the header,” Kovar said. “I don’t really remember the collision. It all happened so fast. I remember laying there and feeling (my shoulder). I could feel a big bump.”

Kovar  collided with Oniel Fisher. Kovar landed on his side. After the match, then-coach Sigi Schmid, normally reticent when discussing injuries the night of a match, was straightforward with reporters.

“My understanding is that it might be a broken collarbone,” he said.

Just like that, Kovar was on the outside looking in as he began a painful rehab. The Garfield High School and Sounders Academy product, who had scored a goal in 10 starts for Seattle, would miss eight weeks, as well as the MLS Homegrown Game, designed to honor the best players in the league on Homegrown contracts. He would have joined teammate Jordan Morris.

“I was ready for that Homegrown All-Star game too — I was bummed to miss that,” Kovar said. “Obviously not being with the team for a while hurt, but it’s kind of the sport we’re in. Those things happen to everyone. In the grand scheme of things, a broken clavicle isn’t really that bad, when you compare it to knees, broken legs, all of those injuries.

“Though it was a bit of an annoying speed bump, it wasn’t that big a deal. Keeping that in perspective really helped me mentally, and the fact that I was able to work out so much.”

The initial parts of the rehab were the most frustrating. Ten days of so little mobility he had trouble pulling a shirt over his head, followed by rigorous workouts designed to avoidshoulder movement.

Kovar either lived on a stationary bike inside the weight room at the team’s training facility, or spent practice with his arm in a sling, pulling a sled around the perimeter of the pitch, watching the proceedings.

Head strength coach Chad Kolarcik and sports science manager David Tenney also had Kovar work out on something called a kBox, a Swedish pulley machine that clips into straps worn around the torso to allow an athlete to perform resisted squats with no pressure on the shoulders.

Rehab was one challenge. But dealing with the team reshuffle was also difficult. After the Open Cup loss was followed by a 3-0 debacle at Sporting Kansas City, Schmid was fired. Assistant head coach Brian Schmetzer took the interim job.

Kovar says he felt lucky that it was Schmetzer, whom he has known for years, and not an outsider who stepped up after Schmid’s departure.

“It’s difficult, during a coaching change, not being around,” he said. “It’s kind of a clean slate in some ways, but one of the positives I was able to take away was that I’ve known Schmetzer a long time. He knows my game as well as anyone here. It would have been pretty difficult to be out of it for two months while a completely different coach came in.”

Kovar says he is healthy and fit enough, thanks to his intense exercise routine, to play Sunday against the Galaxy in Los Angeles (1 p.m., ESPN), the same match-up where he had his injury.

Schmetzer said he was impressed by Kovar’s recovery.

“He’s pushing, pushing, pushing, because he’s another kid that trains hard every day,” Schmetzer said. “I can’t put an exact timetable on it, but I think he’ll be ready to play, and then it’ll be the coach’s choice whether he’s in the eighteen or the starting eleven.”

For Kovar, after the rehab, it’s a relief to be back to the simple goal of playing his way into a spot.

“I want to start helping the team,” he said. “That’s why I pushed so hard in rehab, and did so much extra work to get me as close to fit as quickly as I can . . . all I can do is perform as well as I can every day, and not give the coaches any excuse not to give me the opportunity.”

Two Seattle Sounders were named to the MLS “24 under 24” list, the league announced Thursday. The list, designed to honor the top 24 players in the league under 24 years of age, ranked Sounders midfielder Cristian Roldan in the No. 24 spot, and rookie Jordan Morris at the No. 3 spot. Orlando City’s Cyle Larin took home the top spot.

Roldan, 21, began the season hoping to crack a starting spot with the Sounders after making several emergency starts last year. Instead, he became a fixture for the first team, scoring 3 goals in 22 starts as a defensive midfielder alongside Osvaldo Alonso.

Morris, 21, was Seattle’s biggest offseason acquisition, signed to the largest-ever Homegrown contract when he joined the club. Morris has scored a team-best 10 goals, becoming just the fifth rookie in league history to break double-digits his first year. Morris has also scored five game-winners for the Sounders, a league record for a rookie.

Andrew Harvey is a co-host of Radio Cascadia, a weekly podcast that provides impartial coverage of the Seattle Sounders, Vancouver Whitecaps,and Portland Timbers. Click here to listen to the latest episode.