Imagine what impact J.A. Happ, a 20-game winner for Toronto, and Mark Trumbo, MLB’s leading home run hitter, might have had on the 2016 Mariners, whose trades of the pair made Seattle unique in MLB history. 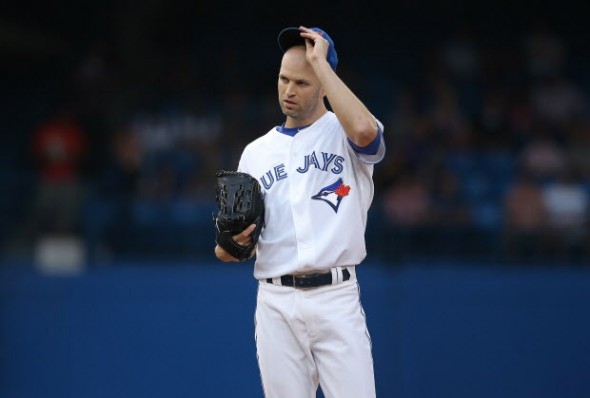 J.A Happ, swapped by Seattle to Pittsburgh at the 2015 trade deadline, is 20-4 for this year’s Toronto Blue Jays. / ocanada.com

Despite losing four of their past six to Houston (1-2) and Toronto (1-2), the Mariners ended their home stand as they entered it, trailing Baltimore by two games in the chase for the second AL wild card. Although Seattle played poorly, and needed a 12th-inning, walk-off sac fly by Robinson Cano Wednesday to retain a modicum of dignity, it got lucky: The Orioles simultaneously dropped four of six at Camden Yards, to Tampa Bay and Boston.

Seattle has 10 games remaining – three at Minnesota starting Friday, three at Houston starting Monday, and four against Oakland in the final weekend. The Mariners are a combined 16-18 against the trio and will probably need a minimum of eight wins, which would give them 88, to clinch the second wild card. FanGraphs projects them to win 85.4.

They will engage in a high-wire act over the season’s final days. FanGraphs projects a splat, an 11.7 percent chance to clinch. The shortfall makes you wonder what would have happened if the Mariners hadn’t traded J.A. Happ and Mark Trumbo to the Pirates and Orioles, respectively.

Happ departed at the 2015 trade deadline, went 7-2 down the stretch for Pittsburgh and signed the past winter as a free agent with the Toronto Blue Jays. This year, Happ is 20-4, collecting his 20th at Seattle’s expense Tuesday at Safeco Field. In no small part due to Happ, the Blue Jays (83-69) hold the AL’s first wild card spot.

Trumbo went to Baltimore Dec. 2 in a deal engineered by new GM Jerry Dipoto, who replaced Jack Zduriencik after Seattle missed the postseason for the 14th consecutive year. Trumbo has responded to his Seattle dismissal by bashing a major league high 43 home runs.

The Happ/Trumbo trades hardly mark the first times the Mariners disposed of assets that would win 20 games or hit 40 home runs for other teams. Here’s a refresher:

(*=drafted by the Mariners, Ortiz played in the minor league system until 1996 when he was traded to Minnesota)

What’s different with Happ and Trumbo, and also unique, is that they were traded either during or immediately following the same season.

Since 1969, the beginning of divisional play, there were 234 20-win seasons and 225 40-homer seasons (obviously, some pitchers and hitters more than once).

Of the 234 20-win seasons, 28 (11.9 percent) were recorded by pitchers immediately after joining a new team, either by trade or via free agency. Example: FA Greg Maddux left the Chicago Cubs after the 1992 season and won 20 games for the 1993 Atlanta Braves.

Of the 225 40-homer years, 22 (9.7 percent) were recorded by hitters immediately after joining a new team. Example: FA Barry Bonds hit 34 homers for the 1992 Pittsburgh Pirates and 46 for the 1993 San Francisco Giants. And closer to home: Nelson Cruz hit 44 homers for Seattle in 2015 after signing as a free agent from Baltimore.

Example: In 1972, Davey Johnson played for Baltimore. Following that season, the Orioles traded him to Atlanta. He hit 43 homers for the 1993 Braves. Also in 1972, Bill Singer went 6-16 for the L.A. Dodgers, who traded him to the California Angels that winter. In 1973, Singer won 20 for the Halos.

Notice that YOUR Seattle Mariners are the only team since the first moon landing to get rid of next-season 20-40 guys in the same calendar year. Their trade acumen netted minor league pitcher Adrian Sampson in the Happ deal and backup catcher Steve Clevenger, shelved since June 29 with a fractured hand, in the Trumbo trade.

Happ didn’t endear himself to Zduriencik. He struggled in his final two starts and threw an atrocious game in his last Seattle outing, a 9-5 loss to Minnesota July 30 in which he allowed seven runs on nine hits in 3.1 innings. Zduriencik, who never hid the fact that he didn’t want Happ on the roster, sent him to Pittsburgh the next day.

Acquired a year ago in June by Zduriencik from Arizona to bolster an anemic offense, Trumbo had a rough first month with the Mariners, but hit .302/.358/.490 with 12 homers and 36 RBIs in his final 74 games.

As soon as he was hired to replace Zduriencik, Dipoto made clear his priorities: Speed, on-base percentage and defense  Coupled with the  impending arbitration number of $9.1 million, the lumbering Trumbo became expendable. Trumbo won’t be the AL MVP this year, but he’ll make the top five in voting.

We can only speculate about the impact 20-game winner Happ and 40-homer hitter Trumbo might have had on the 2016 Mariners. It might have been zilch. Or it could have been profound.

But, to borrow a word from the current political discourse, it’s for sure that the “optics” won’t look good should the Jays and Orioles make the playoffs instead of the Mariners.