The end of a majestic career is nigh. Vin Scully will wrap up his baseball broadcasting career next week, and Kevin Costner delivered a speech worthy of the man and the moment. 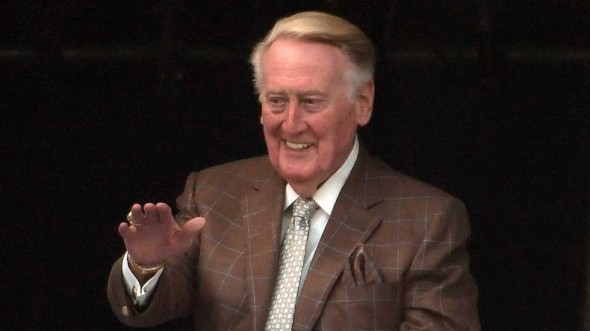 Vin Scully was saluted Friday night at Dodger Stadium as his career comes down to the final six games. / Foxsports.com

The Dodgers had a farewell party for Vin Scully Friday night at Dodger Stadium as he broadcasts the final games of his transcendent career. Since no one in the history of sports has done so long a job done so well, there were tears enough to saturate the Southern California desert.

Never has there been a figure so beloved by so many in any sport. He is that rare being about whom an unkind word has never been uttered.

Some of the best words of the evening were delivered by actor Kevin Costner, who has starred in three baseball movies and knows Scully as friend and fan.

Watch and listen to the video above. Have a small towel on stand-by.