Russell Wilson seems to be moving well enough to keep his job Sunday in New York. Despite a positive showing in the rout of San Francisco, rookie backup Trevone Boykin will remain holstered. 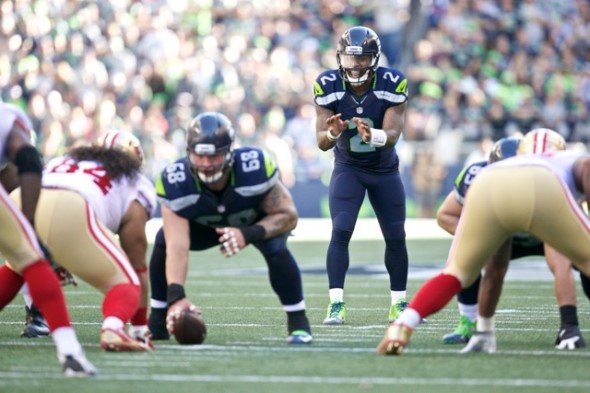 Absent a torn ligament or bone protruding from flesh, QB Russell Wilson is in the twilight world of sports injuries: Not too hurt to play, but not healthy enough to keep Seahawks fans from retching every time the pass rush closes in.

Neither Wilson nor Pete Carroll are listening to the retchers. And really, who would?

In the new ritual of coy Carroll answers to media questions about Wilson’s health, the coach parried a couple, then was finally asked if he would be surprised if Wilson did not play Sunday in New York against the Jets. Seeing no way out, he said, “Yeah, I would be surprised. He’s pretty determined to get this done.”

Many witnesses to Wilson’s painful-looking sack Sunday that wrenched his left knee and left him with a sprained ligament were persuaded that he should sit out the Jets game. Especially since the Seahawks have a bye the next week and the Jets appear to suck — unless one sees a Super Bowl imminent in the eight turnovers the Jets had in a 24-3 loss to the Chiefs Sunday.

Adding momentum to the notion of rest was the decent relief pitching by undrafted rookie Trevone Boykin. But he took over in a game the Seahawks led 27-3, throwing a touchdown and an interception that was a bad pass from the first time it flickered in his young synapses.

“Ball shouldn’t have been thrown,” he said Wednesday, with acute hindsight following the fourth-quarter pick.  “I was late with the ball, and the guy made a great play.”

His immediate supervisor, offensive coordinator Darrell Bevell, was even-handed in his assessment.

“I think he performed well, a little bit up and down, but for the most part he did the things that he needed to do,” Bevell said. “He got the ball where it needed to go and was able to move the team.”

But not enough to convince Bevell that Boykin was ready to assume command on the road among the Gotham hostiles. Boykin was, however, cool enough to impress LT Bradley Sowell.

“He was calm for a rookie, which I was happy about,” Sowell said. “He kind of took over the huddle, took charge. He made some really good reads throwing the ball. He didn’t try to force anything other than that last one. When he hit Doug (Baldwin), I was pretty impressed.”

That was a 16-yarder with 12:53 left in the game, his first NFL TD that produced the predictable blizzard of text messages from delighted friends and family, plus a souvenir.

“Everybody’s rooting for you, even people you don’t know — ‘You’re s great kid, great guy.’ I felt proud of myself and the team,” he said.  Of course, he kept the ball. At least half of it.

“He’s an undrafted guy, so he knows the level of effort and time you put in.”

The odd rituals of the UDFA (undrafted free agents) are a tradition among the Seahawks, not to be questioned.

Also to be respected, apparently, is Wilson’s ability to heal faster than many others. Carroll’s answer to a question about traits in players that make for faster recovery included terms like, grit, passion and commitment, but also an admission that it’s not knowable.

“We have be open to the fact that some guys do this faster than other guys,” he said. “The normal time frames don’t always fit. It’s a makeup that we really cherish around here. I think it’s pretty common that they’re just not going to accept the fact that they can’t go.”

At the outset of training camp, the Seahawks seemed overloaded with running backs as they attempted to replace the almost irreplaceable Marshawn Lynch. But injuries at the position have made the personnel people intense scroungers of the waiver wire.

The latest find is veteran running back C.J. Spiller, a well-known name but, at 29 and oft-injured, was released by the New Orleans Saints earlier this month. To make room, the Seahawks cut Terrence Magee, a free agent signed last week.

Spiller was a star at Clemson and in 2010 a first-round draft pick (ninth overall) by the Buffalo Bills. His best of six seasons was 2012, when he rushed for 1,244 yards. His biggest near-term virtue is as a third-down back adept at receiving. He has 192 career catches and eight receptions for TDs.

The third-down role was one for which C.J. Prosise was drafted in the third round out of Ohio State. But for three weeks, he has had a cast to protect a broken wrist bone, and even though he was listed Wednesday as a full practice participant, that may be only for special teams.

There was a report that the Spiller had as many as eight teams interested in his services.

With Thomas Rawls out at least a few more weeks with a broken fibula, Spiller could see action quickly as a backup to starter Christine Michael.