For Huskies, a chance to return to the big time

The Washington football program seeks to reclaim former glory with the first top-10 match-up in nearly 20 years under the Friday night national TV lights at Husky Stadium against Stanford. 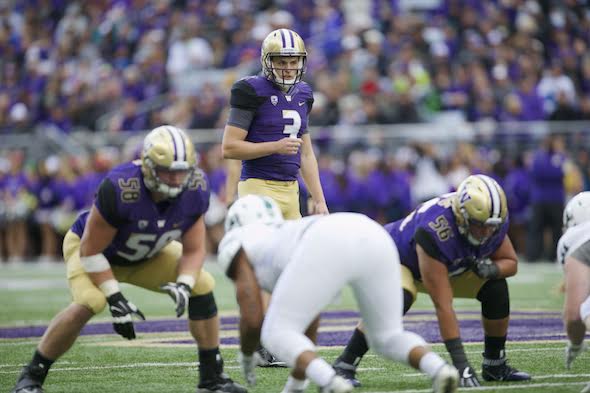 When No. 7 Stanford rolls into town Friday (6 p.m., ESPN) to play the No. 10 Washington Huskies, it will be the first top-10 matchup in Husky Stadium since 1997. The test presented by the Cardinal is Washington’s chance to earn a place at the table in the national discussion of playoff teams, and help turn a storied past into a storied present.

When the Huskies faced Stanford in Palo Alto last year, they lacked QB Jake Browning, out with a shoulder injury, and were 19-point underdogs. Four quarters later, they were beaten 31-14, having surrendered more than 300 all-purpose yards to RB extraordinaire Christian McCaffrey.

Now, on a short week, the 4-0 Huskies will see where they are on the road, attempting to upend a Cardinal (3-0) team they have lost to in eight of the past nine meetings, and have not beaten at Montlake since 2003 (Washington’s home win in 2012 was  at CenturyLink Field during the renovations to Husky Stadium).

It’s a big task against a physical team. Stanford’s roster has 16 fourth-year and 10 fifth-year seniors, grown men with half a decade’s experience thrashing opponents.

“They play physical,” said offensive coordinator Jonathan Smith Tuesday. “It’s the back end to the front end. They have talent. We’re going to have to earn what we get.

“You’re going to need to slug it out. You’re going to have to create some big plays and be great with your opportunities because on the offensive side, they possess the ball. It’s going to be a big fight. We’ve got to execute.”

Washington’s athletic department has put a big effort into framing the season as a quest to return the program to former glory.

“Let Purple Reign Again,” reads a banner image on the team’s website. Another series is simply titled “The Pursuit.” It’s a campaign to connect fans to the record of success under coach Don James.

“We got back pretty late from Arizona, but we’ve got to bounce right into Stanford,” Browning said Tuesday. “As far as the hype and all that, we’ve been too busy to read into with the short week.

“It’s finding that happy medium where you feel the intensity of it, but you’re so calm you move lethargically, and also, making sure you don’t get too hyped up. Quarterback is a different position. You’ve got to find that happy medium. You’re not just going against one person, not just thinking ‘I want to beat that guy.’ You’ve got to think schematically.”

It requires playing with equal parts head and heart. For fans, nervous energy abounds, anxious about whether the team can take another step in fulfilling lofty ambitions.

A win Saturday would not equate to Annunciation. But it would provide a benchmark in Petersen’s third year, proof Washington was back in the mix at the top.

As if they needed the encouragement, Petersen had a word for the fans at his Monday press conference.

“I want them to be like they always are when this place gets filled up — loud and passionate,” he said. “Just like I want our players to (be). It’s such a unique environment and it doesn’t happen all the time, when you’re going to get the place packed.

“I just want everyone to enjoy college football and be all in — players all in, fans all in, coaches, everybody . . . all in.”