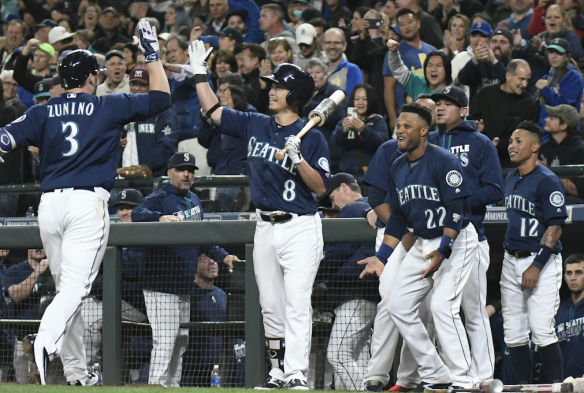 It wasn’t exactly a playoff atmosphere for a rare September game that mattered, but the Mariners rewarded the 19,796 fans at Safeco Field with a 3-2 win over Oakland Thursday night (box). C Mike Zunino’s tie-breaking homer in the seventh and closer Edwin Diaz’s Houdini act led to Seattle’s fourth win in five games as the Mariners (85-74) hung around in the AL wild-card race – trailing co-leaders Toronto and Baltimore by two games with three to go.

Zunino has a knack for timing —  each of his homers seems to come at a great time for the Mariners. That was the case again Thursday, when he broke a 1-1 tie with a leadoff home run in the seventh inning.

Diaz nearly blew another save in a shaky ninth, giving up three hits and a run before striking out the final two batters. He stranded runners on first and third when Oakland’s Max Muncy whiffed swinging.

Rookie southpaw Ariel Miranda turned in another solid start in his final appearance of the rgular season, going 5.1 innings while allowing one run off four hits. The only damage came on a solo home run from Oakland’s Chad Pinder, his career first.

Drew Storen came on in relief and got through the sixth before rookie Dan Altavilla had a rare off night, allowing hits to two of the three batters he faced in the seventh. Former closer Steve Cishek threw one of the biggest pitches of the night when he came on for Altavilla and got Oakland pinch hitterMuncy to ground into an inning-ending double play.

Zunino had the big hit with his 12th homer, while CF Leonys Martin added an RBI single to drive in the first run of the night.

The most surprising performance came from aging DH Nelson Cruz, who not only recorded his second stolen base of the season but also managed to leg out an infield single in the sixth.

The Mariners knew their standing in the wild-card race before Miranda threw a pitch. Baltimore’s 4-0 win over Toronto was a blow, leaving the Mariners two back. Detroit sits between the M’s and O’s, 1.5 games behind Baltimore and Toronto after a rainout. The Orioles’ win knocked both the Yankees and the Astros out of contention, leaving Toronto, Baltimore, Detroit and the Mariners battling for the two wild-card spots. It will take three more wins, and three losses by either the Blue Jays or Orioles, for Seattle to earn a bid outright.

“We know we have to win. That’s the thing. We only have three left now, and if we don’t win our games now. Nothing else matters.” — Zunino

Potential playoff tickets go on sale through the team’s website Friday . . . Cruz was still battling a sore wrist Thursday . . . Oakland starter Kendall Graveman was 0-3 with a no-decision in his first four starts against Seattle . . . Shall we play the next three in Oakland? After the narrow escape, the Mariners are 3-4 against the A’s at Safeco Field while sporting an 8-1 record in Oakland.

RHP Taijuan Walker (7-11) tries to keep up his string of solid starts when the Mariners host Oakland again at 7:10 p.m. Friday night. Walker, who has a 3-1 record and 3.28 ERA since getting shelled by the Angels earlier this month, will face another young A’s starter in Raul Alcantara (1-2).