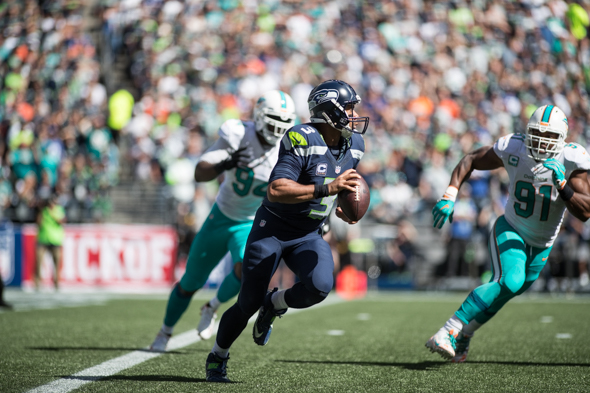 Russell Wilson figures to be on the move Sunday in New York. / Drew Selllers, Sportspress Northwest

QB Russell Wilson is a full go for Sunday, and three teammates — draftees RG Germain Ifedi and TE Nick Vannett, plus free agent signee RB C.J. Spiller  — likely will see their first regular-season action as Seahawks at 10 a.m. Sunday against the Jets at MetLife Stadium in the New Jersey swamplands.

Wilson “made it through and had his best week since the first week before he tweaked his ankle,” coach Pete Carroll said after practice Friday. “He looked really good.”

Wilson will be playing in a brace that protects his left knee, which has a strained ligament that caused him to miss the first snaps in his NFL career Sunday in the 37-18 win over San Francisco. He used a brace once in his college career at North Carolina State.

“I’ve been able to do it and it’s not going to be a hindrance, really,” he said. “I don’t mind wearing one — I’m wearing one right now.”

Wilson claimed to not have engaged in a lobbying campaign to persuade Carroll to play him.

“I haven’t really tried to politic,” he said. “The doctors looked at my leg, they see my mobility in it, they see my strength in it. There’s nothing about politicking.

“You have to make a smart with an injury like that. I feel great, my mobility is good. Working on my flexibility and mobility, especially my hips and legs.”

Regarding Spiller, Carroll says he knew him from his recruiting days at USC and was happy to add him Wednesday after the New Orleans Saints cut him two weeks earlier. He confirmed Spiller can play Sunday in the injury absence of Thomas Rawls.

“He was pretty exciting,” Carroll said. “I’ve known of him for a long time, watched his career. So we grabbed him and he had a good week. We’ll see where he fits in.

Ifedi and Vannett missed the first three games with leg injuries but made it through a week of practice. Ifedi will start ahead of J’Marcus Webb.

“He had a really good week; he’s going to play,” Carroll said. “We’re really excited about that.”

Vannett will be a game-time decision.

“We eased him into the week so we didn’t have a complete week,” he said. “But he did a good job and it looks like he’s back. In the next couple weeks he should really be a factor to help us out.”

Graham appeared on the injury report as questionable, but Carroll said it was back spasms unrelated to his comeback from knee surgery.

“He’s had a great return — he’s really game ready to go now,” he said. “He’s had enough plays and games, and enough action. There’s no restriction on him in any way.”

Reed has a hip injury from the Niners’ game that grew worse during the week. Tony McDaniel is the likely replacement. Morgan has a sports hernia that first developed during training camp.

“We are trying to figure that one out,” Carroll said. “It looks like he could play this week, but he’s struggling a little bit to get through the week.”