Washington’s 44-6 romp over No. 7-ranked Stanford Friday night represented the largest margin of victory by a Husky team over a Top 10 opponent in program history. 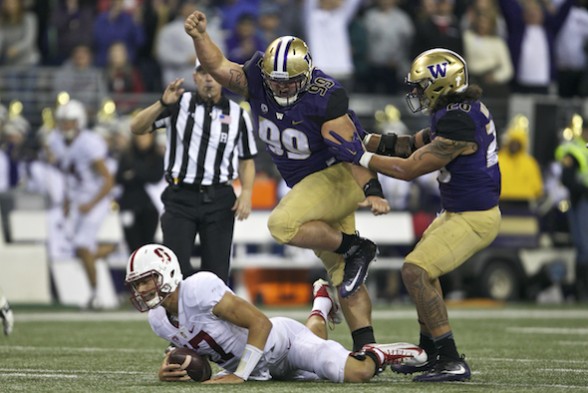 Chris Petersen won’t admit it, but he targeted this game from long distance, certainly when the schedule came out, and probably from three years ago in Boise. He imagined a  Husky Stadium madhouse (72,027) in a prime-time, nationally televised game against a premier opponent.

Making it even better, the opponent, Stanford, thought about him in 2011 as a successor to Jim Harbaugh. But as much as he admired Stanford’s blend of scholarship with good football, the timing wasn’t right.

So he came to Washington in 2013 with the idea that, to the extent possible, he would try to replicate Stanford.

Friday night, he splattered the Cardinal.

Playing Stanford’s game better than Stanford did, the Huskies controlled the line of scrimmage on both sides so thoroughly that the game was over before halftime because of sheer physical domination.

The college football nation, having only one game to watch on a Friday night, was slack-jawed at the 44-6 outcome (box). Washington not only beat a top 10 opponent by the greatest margin in its football history spread across three centuries, it woke the echoes of its glorious past under Don James.

The 1991 Huskies team was back, honored at halftime on the 25th anniversary of its national championship. The timing was the kind of cornball seen in sappy sports movies, but Petersen, whose public emotions typically run the spectrum from the Sphinx to Bill Belichick, couldn’t get over it.

“I think it was really cool that the ’91 team was here,” he said. “Probably some of those guys hadn’t been here in a really long time, to be in this environment. They probably think this is exactly how it was when they left.”

That was as close as Petersen has come to bragging. But as the saying goes, it ain’t bragging if you can back it up. The Huskies did, to the raucous delight of a 12-level fan combustion

UW scored on all four possessions of the first half, then topped that with an immense  16-play march that took nearly 10 minutes of the second half to score a touchdown. It was so . . . so Stanford.

“That may have been the highlight,” said Petersen, unable to stifle a grin.

It’s true that Stanford was missing two starting cornerbacks, but Washington’s defense was so overwhelmimg — eight sacks and 10 tackles for loss; who does that against a good team? —  that even with Heisman Trophy candidate RB Christian McCaffrey, the Cardinal had 145 yards in total offense from their first seven possessions.

So overwhelming was their play that DT Elijah Qualls, who was in on five tackles, was persuaded that the 10th-ranked Huskies can lay similar licks on any team in the country.

“I truly believe in my heart we can beat any team that goes up against us.”

Based on the evidence Friday, it was hard to argue, although Petersen undoubtedly will. Particularly since the next game is in Eugene against the despised Ducks, who first must play in Pullman Saturday against Washington State, which beat the Ducks a year ago.

But if Washington manages the feat of thwarting their chief Pac-12 Conference nemeses in consecutive weeks, the path is much clearer to a berth in the league championship game. And then . . . well, let’s not go there yet.