The Mariners went deep early and made it stand in a 5-1 triumph that pulled them to one game back of the final wild card spot. 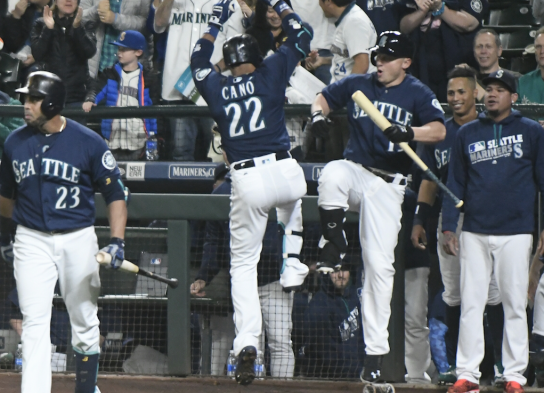 Good night for Seattle sports. The Mariners moved back into the thick of the wild-card race, although they’ll still need some help, after a 5-1 win over the A’s Friday night at Safeco. Four home runs, including two from 2B Robinson Cano, gave Seattle (86-74) a 5-0 lead by the third inning. Seattle is one game behind Toronto, which is in the second and final AL wild-card spot with two games to go.

On a night of baseball and scoreboard-watching, the back-to-back homers from Cano and DH Nelson Cruz in the third got Safeco Field rocking. The solo home runs – Cano’s second homer of the night and Cruz’s 42nd of the season – came as word of Toronto’s loss to the Red Sox became known. Postseason chances gained renewed life in a matter of minutes.

Starter Taijuan Walker had another strong outing:  Six solid innings with an early lead. Walker struggled with his control (five walks) but held Oakland to one run off two hits.

Reliever Evan Scribner extended his scoreless streak to 11 games with a perfect seventh inning; he hasn’t allowed a run in 13.1 innings.

Fellow veterans Nick Vincent and Steve Cishek closed out with scoreless eighth and ninth innings as the A’s managed just two hits. Oakland’s only run came on a leadoff homer from rookie 3B Ryon Healy in the sixth.

The Mariners had four home runs by the third inning. Cano went deep twice, LF Norichika Aoki added his fourth homer, and Cruz hit No. 42 while going back-to-back with Cano in the third. Oakland’s bullpen quieted the Mariners’ bats over the final five innings, but that didn’t matter.

The Red Sox did Seattle a huge favor by knocking off the Blue Jays, which keeps Seattle alive in the race for the second wild-card spot. Baltimore and Detroit both rolled to wins; the Tigers are now a half-game behind Toronto, with Seattle one game back.

Baltimore is becoming less important – the Mariners can only tie the Orioles with a perfect weekend – and could become out of reach with a Saturday afternoon win over the Yankees. The Toronto-Boston game is a big one for Mariners fans when the teams play at 4:10 p.m. PT. At the same time, Detroit plays an Atlanta team that’s even worse than the A’s.  If the Blue Jays lose again, and the Mariners and Tigers win out, Detroit would have to play a Monday makeup game against the Indians; the teams were rained out Thursday.

“I love this kind of situation. It’s every kid’s dream come true. When you play baseball, you want to play for October.” — Cano

The Mariners’ rotation was lined up so that the team’s two best starters would be available for the final weekend. But it might be too late for Hisashi Iwakuma and Felix Hernandez to save them. Iwakuma (16-12, 3.96 ERA) will get first shot in a Saturday game that can keep Seattle in the race until the regular-season finale Sunday. Oakland is scheduled to send RHP Jharel Cotton (2-0, 1.44) to the mound. The 24-year-old rookie was part of the deadline trade that sent OF Josh Reddick and RHP Rich Hill to the Dodgers, and he’s been a nice addition.