Russell Wilson’s knee and ankle problems didn’t hamper his performance Sunday as he threw a trio of touchdown passes in a 27-17 victory over the Jets at MetLife Stadium. 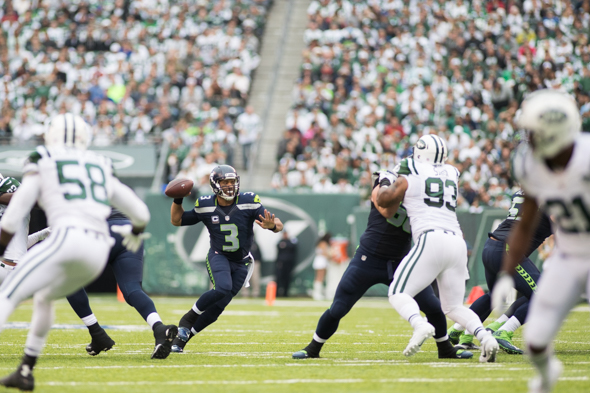 Even on a gimpy leg, Russell Wilson carved up the New York Jets Sunday at MetLife Stadium. Wilson completed 23 of 32 passes and tossed three touchdowns as the Seahawks rolled to a 27-17 victory (box). Seattle improved to 3-1 heading into its bye week, a break that should give Wilson sufficient time to recover the ankle and knee injuries that again restricted his mobility.

Not that it mattered much against the Jets. Wilson threaded an eight-yard TD pass to newcomer RB C.J. Spiller between two defenders, tossed a 42-yard TD to an absurdly wide-open WR Tanner McEvoy, and six-yard TD to RB Christine Michael. But Seattle’s receiving star was Jimmy Graham, the first tight end in franchise history to record back-to-back 100-yard receiving games.

The Seahawks, who came up with only one turnover in their first three games, produced three — two interceptions by CB Richard Sherman and another by FS Earl Thomas — in beating the Jets in New York/New Jersey for the first time since Sept. 11, 1983, when Richard Todd was their quarterback.

Trailing by seven points but on the move to start the fourth quarter, Jets QB Ryan Fitzpatrick threw a pass to WR Brandon Marshall at the Seattle 39 that Sherman, burned repeatedly by Marshall in the first three quarters, picked off. Seizing the opportunity, Wilson hit Graham for 24 yards and WR Paul Richardson for 27 before capping the drive with a six-yard TD to Michael to give Seattle a 24-10 lead.

Wilson, who wore a custom knee brace, had a season-high 309 passing yards, did not throw an interception and finished with a 133.5 passer rating after hitting on 10 of 11 for 191 yards and two TDs for a 158.3 rating (perfect) in the first half.

The 300-yard passing game was Wilson’s first in the regular season since he threw for 345 against Pittsburgh Nov. 29 at CenturyLink Field. It was also the eighth 300-yard performance of his career (regular season and playoffs). Wilson was sacked twice.

Graham, questionable with back spasms earlier in the week, caught six passes (on eight targets) for 113 yards, averaging 18.8 per catch with a long gain of 27. He consistently out-muscled defenders to make catches, In the first quarter, he made a spectacular, one-handed grab for 17 yards on the sideline. Last week against San Francisco, Graham caught six for 100 yards.

Spiller, whose first catch for the Seahawks also went for a TD, signed with Seattle last week shortly after he had worked out for the Jets, who opted not to sign him.

As advertised, the Jets were tough against the run, but the Seahawks managed 66 yards, 58 by Michael and 12 by Spiller, who signed with Seattle last week when it became clear that the injured Thomas Rawls would be unable to play.

Steven Hauschka drilled both of his field goal attempts, his 53-yarder in the fourth quarter giving the Seahawks their final points.

Sherman had a rough day in his matchup with Marshall, who caught four balls for 89 yards and a touchdown that flew right by Sherman. But his two picks in the fourth quarter  — the first came one play after Sherman was flagged for pass interference against Marshall — increased his career total to 28, most in the NFL since he entered the league in 2011.

Thomas’ interception, also in the fourth quarter, was the 16th of his career and led to Hauschka’s second field goal.

Wagner led the Seahawks with 11 tackles (seven solo), including two tackles for loss. Thomas finished with seven stops (three solo) and Wright six, including one for loss.

Seattle seemed on the verge of holding the Jets to 10 points (the Seahawks entered allowing 12.3), but gave up a fluke touchdown with 2:15 remaining. With Fitzpatrick attempting to pass, his arm started to come forward, but was whacked by Avril. Figuring that Fitzpatrick had thrown an incompletion, the Seahawks largely stopped playing and rookie WR Charone Peake alertly picked it up and ran 42 yards untouched for a touchdown that the officials ruled occurred on a fumble recovery.

Seattle’s victory at MetLife Stadium was its first in the facility since the Seahawks thumped the Denver Broncos 43-8 in Super Bowl XLVIII . . . The Seahawks improved to 11-8 all-time against the Jets (Seattle has defeated New York three consecutive times) and to 8-5 in their last 13 10 a.m. PT kickoffs . . . Seattle is 22-6 in games played prior to the bye week, the best mark in the NFL . . . The Seahawks have played 92 consecutive games with the lead, or within one score of the lead, in the fourth quarter . . . Wilson has 49 regular-season wins, fifth all-time in the first five years of a career.

The Seahawks have a bye week, next playing the Atlanta Falcons, coached by former Seattle defensive coordinator Dan Quinn, Oct. 16 at CenturyLink Field (FOX). Falcons QB Matt Ryan Sunday threw for 503 yards and four TDs in a 48-33 win over the Carolina Panthers.