For two gimpy guys, QB Russell Wilson and TE Jimmy Graham ran their gurneys over the Jets 27-17 Sunday in another display of substantial growth of the Seahawks offense. 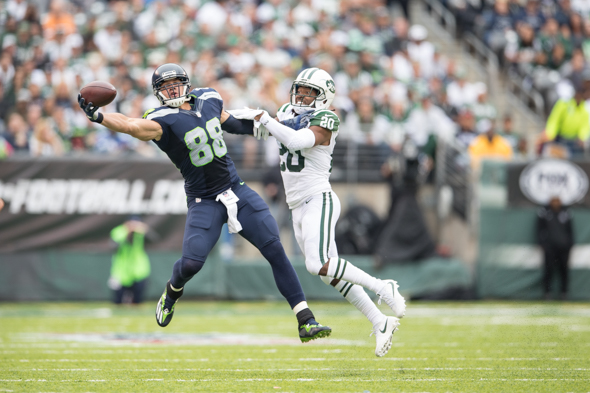 For a guy whom some thought should have sat out the game Sunday in New Jersey to take care of himself, he chose instead to take care of the New York Jets. QB Russell Wilson seems to get almost as much joy proving skeptics wrong as he does winning games.

After the 27-17 win over New York at MetLife Stadium Sunday, a game that bordered on the routine, coach Pete Carroll, backed by Wilson’s 309-yard game with three touchdown passes despite a sore ankle and a sprained knee ligament, decided to swing a cudgel on behalf of his quarterback.

Because Wilson didn’t have all of his trademark mobility, most of his success came from the pocket, from where he completed many of his 23 passes for a 133.5 rating. That spoke for itself, but Carroll chose to amplify.

Carroll didn’t mention names of the miscreant critics. But he could well have called out Manish Mehta, who wrote this Sunday in the New York Daily News:

“Wilson isn’t nearly as awesome as his Puget Sound loyalists believe, so it’s ludicrous to think that he’ll be able to hobble into MetLife Stadium on a gimpy left knee and right ankle on Sunday and have his way with the Jets.”

Add that one to the “Dewey Beats Truman” category of major media whiffs.

But some latitude must be granted. Even people in Seattle didn’t think he should play.

Nor was Wilson the lone Seahawk to have his resilience and recovery misjudged. TE Jimmy Graham, presumed doomed to mediocrity in his first year after patellar tendon knee surgery, blew away the Jets with six catches and 113 yards.

To the Jets, the tender tandem was all nunchucks and switchblades.

“I don’t know what to say about Jimmy — he’s just a monster out there,” Carroll said. “Back-to-back weeks of tremendous plays. You can see Russell believing in him. Putting the ball in places where he can go up and get them.

“Exquisite throws, and the finishes by Jimmy were marvelous.”

The Wilson-Graham pairing suddenly has blossomed in the past two games. The timing was most helpful in the continuing injury absence 0f top rusher Thomas Rawls.

Carroll was unusually thrilled too.

“I don’t know how much more you could do to demonstrate Jimmy is back than the last two weeks,” he said. “Every catch is extraordinary in some way.

“I can’t say we expected it. We just hoped for him. He did such an extraordinary job getting right and getting well, just like Russell.”

It can work only with growth in the offensive line, which limited the Jets’ formidable front to two sacks of Wilson. Sunday featured the first regular-season game at right guard for rookie first-rounder Germain Ifedi. He was schooled on several plays, but the pass protection was good enough to allow completions on 10 of Wilson’s first 11 passes, including second-quarter TDs to two newcomers, WR Tanner McEvoy and RB C.J. Spiller, for a 14-3 lead.

The lead allowed the Seahawks defense to prey on QB Ryan Fitzpatrick, still shaken from a six-interception disaster the previous week against Kansas City. They picked him three more times and dropped him four times.

The heralded matchup between Jets WR Brandon Marshall and Seahawks CB Richard Sherman lived up to expectations. Marshall burned Sherman on a 17-yard TD pass, one of four catches four 89 yards. But Sherman had his first two interceptions of the season.

The Jets managed 133 yards after halftime, 42 of which came a freaky, 42-yard fumble recovery touchdown by WR Charone Peake, who picked up what the Seahawks thought was an incomplete pass after a sack by Cliff Avril.

After four games,defensive prowess has become an expectation.

“Other than the fourth quarter last week, our guys have been stellar,” Carroll said. “They hold up, down after down after down. That’s what we count on every week. It all starts up front.”

At the quarter pole, the Seahawks are 3-1 heading into a bye week that seems well timed for healing of relatively minor injuries.

Two out of three seems t0 work. And three out of four might be appropriate if inclusion of another adage is permitted: Never underestimate Russell Wilson, because you will be told you don’t know what you’re talking about.