After a season of high drama, the end was quiet, a 3-2 loss to the Oakland A’s Sunday that had no meaning except to conclude the season that is without playoffs for the 15th consecutive year. 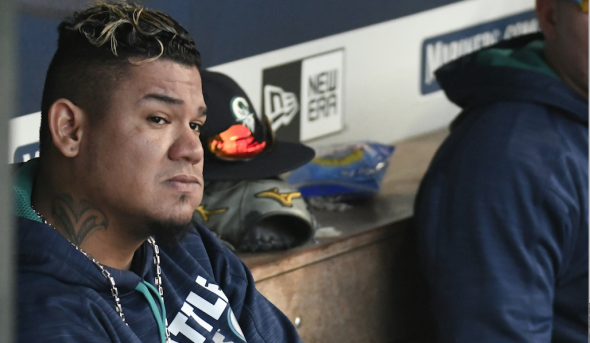 Felix Hernandez’s look said it all for the conclusion of the Mariners 2016 season. / Alan Chitlik, Sportspress Northwest

The Mariners’ first meaningless game of the season resulted in a 3-2 loss to Oakland Sunday afternoon that finished off the 2016 season with an 86-76 record after two consecutive losses to the A’s. Starter Felix Hernandez struggled in his three-inning performance, while Seattle’s watered-down lineup couldn’t get help from stars 2B Robinson Cano and 3Kyle Seager (a combined 0-for-8).

Seager nearly provided a last moment of heroism, which would have recorded his first 100-RBI season, when he drilled a long fly ball toward the right-field seats with one out in the ninth inning. But Oakland RF Matt Olson went up to steal away the home run, leaving Seager to smile sardonically.

Hernandez’s final start of a disappointing season was an indication of how his year went. He gave up a first-inning homer and two runs in the third before the Mariners took their aging ace out of his misery. Hernandez finished 11-8 with a 3.82 ERA, his highest ERA since 2007.

A watered-down lineup featured Ben Gamel and Mike Freeman, trying to make statement about their futures. Each had a hit. LF Guillermo Heredia, who showed some flashes this season, had the biggest hit with a two-run double in the fifth. Cano went 0-for-3 to finish one home run shy of 40 and with a .298 batting average, while Seager’s 0-for-4 left him with 99 RBIs.

“We certainly didn’t have a whole lot of wind in our sails. Last night, and the run we’ve
been on, it took a lot out of us – physically and emotionally. But we hung in there.”  — Mariners manager Scott Servais

Playing for the first time without playoff aspirations, the Mariners went into the finale without DH Nelson Cruz, leadoff hitter Norichika Aoki, CF Leonys Martin and SS Ketel Marte. Cano served as DH.  Chris Iannetta, a third-string catcher by September, was one of five Mariners who started the opener and the finale – joining Cano, Seager, Franklin Gutierrez and Hernandez . . . The announced attendance was 24,856 – probably a lot fewer than would have shown up for a game with wild-card implications. The Mariners pulled in 2,268,573 fans this season.

Another long off-season with plenty of decisions to make. At the top of the list is a starting rotation that has questions. Does Felix Hernandez still have enough left in the tank to be considered the ace? Can Hisashi Iwakuma be a full-time contributor again? Are Taijuan Walker and James Paxton going to shake the inconsistency and develop into something better? Is Ariel Miranda a long-term solution? The rotation could look a lot different next season. One thing known – quite a statement considering where the offense was for most of the past decade – is that the heart of the order is set around Cano, Cruz and Kyle Seager. Key free agents are 1B Adam Lind, 1B Dae-Ho Lee, OF Franklin Gutierrez and RHP Drew Storen, while several relievers are arbitration eligible.