A penalty kick goal and a red card for each team enlivened the Cascadia Cup match won by Seattle 2-1, which eliminated the host Vancouver Whitecaps from the playoffs. 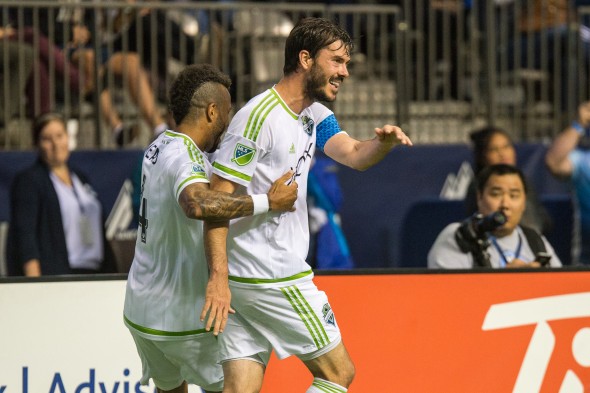 Sounders captain Brad Evans scored a penalty and was sent off in the span of 19 minutes Sunday. / Sounders FC Communications

Brad Evans had a short first game back from injury Sunday against the Vancouver Whitecaps. Seattle’s captain appeared in the 65th minute and lasted just 19 minutes before receiving a red card, but scored the game-winning penalty kick before he was sent off in a 2-1 win over the Cascadia rivals at BC Place.

In his first appearance in a month, Evans replaced Oniel Fisher, who subbed on in the ninth minute after starting midfielder Alvaro Fernandez went down with a hamstring injury.

In the 80th minute with the score tied 1-1, Evans received a ball from Jordan Morris in the right alley. Evans sent a cross across the net, but the ball struck the outstretched arm of Whitecaps defender Jordan Harvey, causing referee Ricardo Salazar to point to the spot.

Evans stepped up and converted down the middle to provide the game-winner, but he would not last the rest of the match. After being held on a corner kick by defender David Edgar in the 84th minute, Evans attempted to head-butt Edgar, earning him a red card for violent conduct.

“If you look at the replay and my mouth, I said, ‘You can’t do that,'” Evans said after the match. “I give (Edgar) a head gesture, never made contact with him. If I had made contact with him . . . he would have gone down in heaps. But he doesn’t, he barely even turns around and asks for a red card. Sure enough, Salazar brings a card out of his pocket.”

The red card was not the first of the match. Vancouver’s Pedro Morales, who converted a penalty for the Whitecaps in the 25th minute, saw red for elbowing Seattle midfielder Cristian Roldan in the head in the 53rd minute.

Morales’s penalty came after Fisher hauled down 15-year-old midfielder Alphonso Davies along the end line after Davies had beaten him.

Interim head coach Brian Schmetzer tried not to focus on a referee’s potential to affect the outcome.

“The game is the game, and things happen,” Schmetzer said. “Referees don’t have an easy job. The game is physical, the game was heated, I just think the referees don’t want to make the game uneven. But if it’s there, then they have to. After the game, people can dissect it, but as far as we’re concerned, we take what the game gives us and control the controllables. We just play.”

In the 39th minute, Osvaldo Alonso scored to bring Seattle level.  Joevin Jones sent in a cross from the left side that found space between two layers of defenders. Alonso met the ball at a full sprint, finishing it into the net on a half-volley to get Seattle back into the game.

Seattle (13-13-5) was without two of its designated players. Clint Dempsey, the club announced Tuesday, will miss the rest of the season due to complications from his irregular heartbeat. Nicolas Lodeiro, meanwhile, who has recorded a goal or an assist in seven of his nine matches with Seattle, served a one-game suspension for yellow card accumulation after he received a card in a 1-0 win over the Chicago Fire Wednesday.

Schmetzer said he expected his team to execute regardless.

“I told the guys before the game that it didn’t matter to me if Lodeiro is gone, if Dempsey is gone,” he said. “Guys have to come in and step up and do their jobs . . . Those guys know how to play, and they’re strong enough as a group that they found a way to win it.”

The win made the race for the final Western Conference playoff spots more exclusive, eliminating the Whitecaps and the Houston Dynamo from the postseason. Seattle moved into fifth place in the Western Conference with 44 points. Sporting Kansas City (12-13-7, 43 points) is in the sixth and final playoff spot, with the Portland Timbers (11-13-8, 41 points) and the San Jose Earthquakes (8-10-13, 37 points) in pursuit.

Seattle is 7-1-3 since the 3-0 loss to Sporting Kansas City that led to the ouster of Sigi Schmid and Schmetzer’s promotion, the best record of any MLS club during that span. Now, the Sounders are near a playoff spot that seemed miles away during the middle of the summer.

Five Sounders will represent their home countries in upcoming international matches. Rookie forward Jordan Morris will get his second call-up in a row from USMNT head coach Jurgen Klinsmann, while designated player Nicolas Lodeiro will represent Uruguay for a pair of World Cup qualifiers.

Morris and the USMNT will travel to Cuba for an international friendly for just the second time in 69 years Friday (1 p.m., ESPN), before hosting New Zealand at RFK Stadium in Washington, D.C. Oct. 11 (5 p.m.,  ESPN).

Lodeiro and Uruguay will host Venezuala at Estadio Centenario in Montevideo Thursday before traveling to play against Colombia Oct. 11.

Joevin Jones will represent Trinidad and Tobago in qualifying matches for the 2017 Caribbean Cup against the Dominican Republic and Martinique. Jones has 55 career caps and six international goals playing for the Soca Warriors.

Oniel Fisher and Damien Lowe, who spent the season on loan with the NASL’s Minnesota United FC, will play for Jamaica in a Caribbean Cup qualifier at Guyana Oct. 11. The call-up marks the first of Lowe’s career, while Fisher has one career cap with the Reggae Boyz.