Seahawks have a new beast in Jimmy Graham 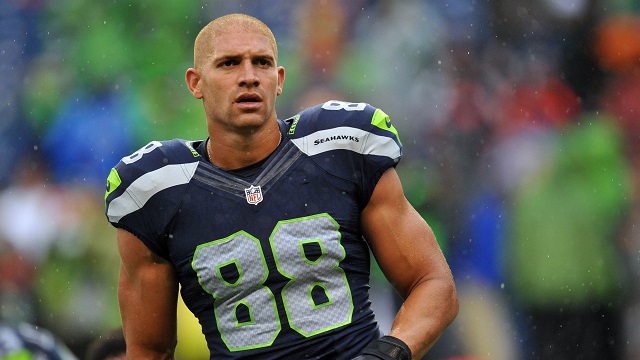 Even after TE Jimmy Graham caught six passes for 100 yards and a touchdown in Seattle’s 37-18 victory over San Francisco 10 days ago, scads of critics still insisted that he was not a good fit for the Seahawks’ offense due to his alleged inability to mesh effectively with QB Russell Wilson. But Graham shot all that down Sunday at MetLife Stadium, and quickly.

The 6-foot-7, freakishly talented tight end launched his own version of beast mode with an outrageous one-handed snatch near the left sideline on the opening possession, beating Jets CB Marcus Williams for a 17-yard gain.

Next time Seattle had the ball, Wilson feathered a pass from inside his own end zone that dropped over rookie LB Darron Lee’s head and into Graham’s clutches for a 27-yard gain. That kept alive a drive that Wilson capped with an eight-yard TD to new RB C.J. Spiller.

On the third possession, Graham bolted past Lee for a 20-yard reception. Six plays later, the Seahawks scored for a 14-3 lead.

In the fourth quarter, following the first of CB Richard Sherman’s two interceptions, Wilson found WR Doug Baldwin for four yards and then arced a pass down the left sideline. Graham, who has told Wilson, “If I don’t come down with it, nobody is,” leaped over Lee and made a 27-yard catch few could have replicated.

“That was a little bit of a shock because I felt like I was in pretty decent coverage,” Lee, an Ohio State Buckeye last year, told The New York Daily News.

“I guarded Jimmy Graham one time,” he said. “Next question.”

In the 41-year-history of the franchise, there have been 176 100-yard receiving games. Of those, only eight were by a tight end. Of the eight, Graham has three. No other Seahawks tight end had more than one. And Graham has played only 15 games with Seattle.

Carlson, McCoy and Willson each had one in a combined 131 games. Graham produced his third 100-yard game in his 15th appearance.

“He can do anything,” Wilson said after Graham demonstrated resoundingly the kind of impact he can have on Seattle’s offense. “He can make any play, any catch. He’s a special player.”

Wilson produced the most efficient first half of his career Sunday, completing 10 of 11 for 191 yards and two touchdowns for a passer rating of 158.3, a perfect score. Due largely to the fact that he was forced to throw away several balls in the second half, Wilson finished 23 of 32 for 309 yards and three TDs.

But that only dusts the surface. Wilson completed 71.8 percent of his passes, didn’t throw a pick, and finished with a 133.5 rating. In Seahawks annals, there have been only six games  — out of 632 – in which a Seattle quarterback tossed for more than 300 yards, completed at least 70 percent, had three or more TDs and no interceptions and compiled a rating above 120.0.

With his effort Sunday, coming on a gimpy leg, Wilson has done this three times and is the only Seattle quarterback to do it more than once (and the second to do it in a road game), as the chart, sorted by passer rating, shows:

Due to the bye week, the Seahawks won’t play again until Oct. 16 when they host the Atlanta Falcons. Coached by former Seattle defensive coordinator Dan Quinn, Atlanta is 3-1 and has scored 35, 45 and 48 points in its past three games, all wins.

In Sunday’s 48-33 victory over Carolina, WR Julio Jones became the fourth receiver in NFL history with a 300-yard game, notching exactly 300 on 12 catches, including one touchdown.

Of the three previous 300-yard receivers, none went off like that in their encore games.

The Seahawks have to hope history holds.