Baseball fans often look at woulda-coulda-shoulda losses when their teams miss the playoffs, but the Mariners lost out July 20 when they traded Mike Montgomery, who could have rescued the pitching staff. 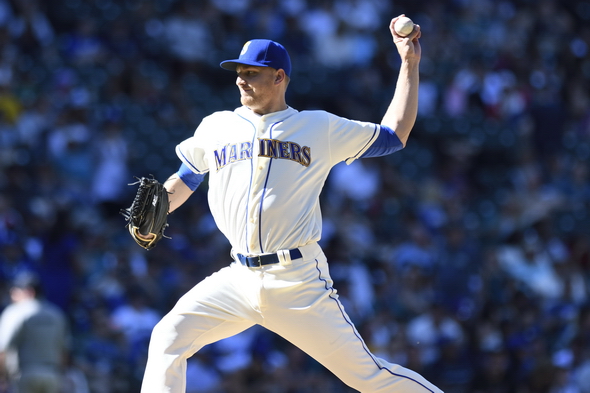 Mike Montgomery was a solid starter/reliever for the Mariners and Cubs. / Alan Chitlik, Sportspress Northwest

Festooned with miracle wins and horrible losses, the Mariners’ 2016 season was all over the place — except in the playoffs. For all the injuries countered by unanticipated successes (Edwin Diaz, closer at 22?!), they wound up exactly where new general manager Jerry Dipoto forecasted in January — 86 wins. And out of the playoffs.

“We built the roster with the idea to get into the mid-80s and keep on getting that 85-86 win zone, and then let the chips fall where they may,” Dipoto said at the Mariners’ annual spring training luncheon in January. “It’s amazing how frequently you’re going to wind up winning a lot more games than that.”

The Mariners made progress in multiple areas, adding up to a 10-game improvement from 2015. They had the highest payroll in club history, were MLB’s oldest team at the start, and became one of its most entertaining with the capacity for late rallies and walk-off wins.

They finished eighth in MLB in OPS, eighth in team ERA and 12th in fielding. But they didn’t make the 10-team postseason field. Since the fifth wild-card spot was introduced in 2012, the average number of wins for the No. 5 spot is 90. The American League’s two wild-card teams, Toronto and Baltimore, each finished with 89. But the frequency of upticks that amazed Dipoto failed to materialize for the Mariners.

Fans can spend a painful off-season picking at the scabs of giveaway defeats to find the three most grievous games that separated the Mariners from the postseason. But the fact is that every middling, non-playoff team has more or less the same collection of agonies every year. The lengthy season does a marvelous job of evening out flukes, freaks and luck.

But if I were to choose one thing that denied the postseason, it was not a single outcome or a set of outcomes. It was a trade July 20.

Montgomery, a former first-round pick of the Kansas City Royals in 2008, had four virtues that were exceedingly hard to find in a single pitcher among the club-record 31 used this season — he was young (26) , healthy, versatile and proven. Plus, left-handed.

Vogelbach? Dipoto said the square first baseman “raked” at every level. But in a September call-up for the Mariners, he was 1-for-13 with six strikeouts and a walk.

Vogelbach, 23, may well become the first baseman of the future, as Dipoto envisions. But the cost was a good chance to end the Mariners’ playoff drought at 14 years, which you may have heard is MLB’s longest.

For two teams, Montgomery was a slightly above average MLB pitcher who could start or relieve. Would he have made the key difference for Seattle after July 20?

Well, he might have made unnecessary this season Donn Roach, Cody Martin, David Rollins, Adrian Sampson, Joe Wieland and SpongeBob SquarePants, plus other pass-through desperadoes I have forgotten from this summer.

Or Montgomery could have replaced injured Nathan Karns. Or filled in for injured James Paxton. Or injured Taijuan Walker.

Given the number and nature of pitching injuries, along with the second-half slumps in the rotation, Montgomery could have turned into the Mariners’ most valuable pitcher. He wouldn’t have compensated for all of the temp hires or injuries, but could he have turned three losses into three wins?

If the Mariners truly wanted to contend this year, they had no business trading at mid-season that most valuable of baseball commodities, a proven lefty starter/reliever. By getting in return players of no help in 2016,  the move white-flagged the season. It’s fairly remarkable that they crawled over the Royals, Yankees and Astros to linger in the race until the next-to-last game.

At the spring luncheon, Dipoto also said, “I think our starting pitching staff is as deep as anyone’s in the division.” That didn’t prove true, but pitching injuries happen to all clubs, few of which are predictable.

That’s why teams like the Cubs, looking to lock down their first World Series title since shortly after the Louisiana Purchase, value pitchers like Montgomery — insurance.

The trade looms even larger after the season because the Mariners finished with big, fat question marks above the heads of Paxton, Walker, Felix Hernandez, Hisashi Iwakuma and Ariel Miranda. No insurance. Isn’t that illegal these days?

It’s unlikely the Mariners are going to quit on Hernandez, Walker or Paxton, but none  delivered a season that evokes a typical 1-2-3 rotation that would succeed in a playoff series.

None of the foregoing suggests that Dipoto did a bad job in his first year. On the contrary, he did much to improve the franchise outlook, especially in player development in the minors as well as the majors. I remain amazed at the healing waters of Tacoma that revived Mike Zunino and Nori Aoki.

I merely point out that the Montgomery trade was what stalled the playoff drive, not SS Ketel Marte’s bad throws.  And now it puts pressure on young Dan Vogelbach to replace the platoon at first base of Adam Lind/Dae Ho Lee, both of whom are free agents unlikely to be re-signed by Seattle.

I just want the new kid to be memorable enough so I don’t accidentally call him Dan Fogelberg.