The Ducks are considering giving a freshman quarterback his first career start Saturday against fifth-ranked Washington. That might be the worst idea since burlap lingerie. 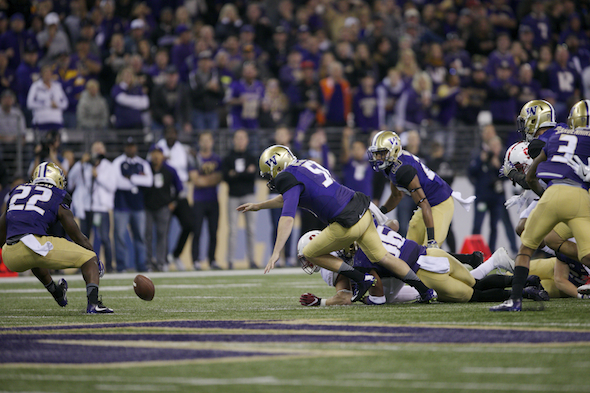 Who the hell is foolish enough to give a freshman quarterback his first career start against the fifth-ranked Washington Huskies?

Correct, Art. You control the board.

Well, I may not control the board yet. Oregon coaches haven’t confirmed a report this week that true freshman Justin Herbert would replace senior transfer Dakota Prukop for the 4:30 p.m. Saturday disputation with the Huskies at Eugene’s Autzen Stadium.

But during practice, the QBs were splitting practice reps, offensive coordinator Matt Lubick told the Oregonian.

While he said a decision hasn’t been made, he did agree it was possible that Herbert would be sacrificed.

The palm-to-forehead part of that quandary is that the offense is the one aspect of Ducks ball that is semi-OK. Prukop, a senior transfer from Montana State, started all five games, completing 92 of 139 passes for 1,173 yards with eight touchdowns and two interceptions. The Ducks average 40 points a game, sixth in the Pac-12 Conference, and 520 yards, ranking fourth.

But in light of three consecutive losses, something unseen at UO since 2006, ooga horns are going off throughout the Willamette Valley. At 2-3 and looking at 2-4 with a large welt, the entire state couldn’t be more shocked than if Nike sold a good pair of shoes for $5 more than the $5 it cost to make them.

The “Ditch Rich” campaign is underway, this time referring to coach Mark Helfrich, not Rich Brooks, a Ducks predecessor 20-some years ago, before hashtag campaigns made coach firings even easier.

It was less than two years ago that the Ducks played for the national championship, and now they act as if they are fearful of looking under the bed. The Ducks’ primary problem is defense, where they are giving up 36 points and 490 yards a game, both 11th in the c0nference.

Saturday the Cougars trashed the Ducks in Pullman 55-31, including — get this — 280 yards rushing. The Cougs run the ball like Kim Kardashian runs a jackhammer. But it was no problem against the Ducks.

“Almost every play they call is a pass and they check to a run,” said Helfrich. “(QB Luke Falk) did a great job of that. That balance was difficult for us to stop.”

The Huskies offense is similarly balanced, only with more talent. But Huskies coach Chris Petersen is not prone to giggle-fests when scouting opponents.

“I think everybody always over-inflates everything, on both ways — that’s what I think,” he said of criticism of the Ducks defense. “I think that they played some hard-fought games that they had chances to win down at the end and, for whatever reason, just didn’t do it. That can affect momentum one way or another. They played Washington State, a hard team to play, really well. In the fourth quarter, it got away a little bit.

“We’ve got a huge, huge challenge in front of us, is what I really, really think.”

The Ducks have had it their way for 12 years over the Huskies. It’s true that none of the Huskies have experienced more than five of those. But does it take more than the previous meeting to marshal the adrenal gland?

Especially if the Ducks go through with the idea of starting Herbert to fix what appears to be unbroken. Herbert, a Eugene native, is a sturdy 6-foot-6 and 225 pounds, but the youngster has almost no experience. He was handed mop-up duty in the Pullman blowout, and completed three of five passes for 70 yards. In explaining himself afterward, he almost sprained his golly-gee organ.

“It was really cool,” he said. “I was really nervous. Those guys came a lot faster than I was prepared for.”

And that was the Cougars defense. Imagine his surprise when LB Azeem Victor shows up in his face mask as the snap reaches his hands.

The Ducks coaches have a couple of days to think about this. Prukop is done after this season. Herbert might have a future in his hometown. He doesn’t want to start off his career known as the guy who threw the interception that turned the series in Washington’s favor.