Washington has lost 12 consecutive times to the Oregon Ducks, dating to 2004. Finally, the Huskies, No. 5 in the Associated Press poll, have a legitimate shot at a win. 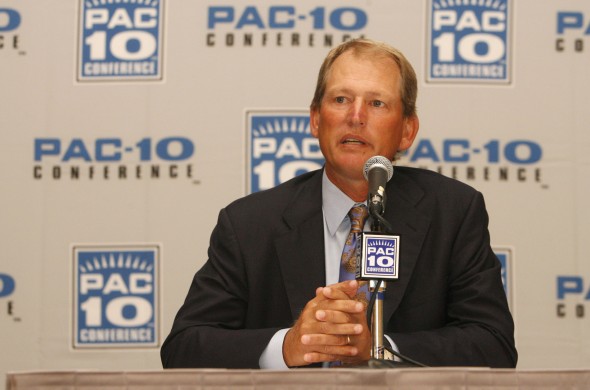 A year later, the scene having shifted to Seattle, Oregon SS Keith Lewis vowed in a series of inflammatory newspaper comments that this time would be different: The Ducks, Lewis vowed, would dance on the block W on the Husky Stadium turf. For two quarters, it appeared the Ducks would make Lewis a Nostradamus.

Oregon took a 10-7 lead at intermission. Upon re-entering Husky Stadium, the Ducks discovered that Pickett had a concussion and wouldn’t play anymore. That meant Oregon would be able to tee off on backup QB Casey Paus, a redshirt sophomore majoring in art history. Paus had never done anything (3-for-8 for 24 yards, 0 TDs) in his college career except take a few snaps in garbage time.

But it didn’t happen. Astonishingly, Paus led the Huskies on five consecutive scoring drives to start the second half and threw his first two touchdown passes since high school. He departed before garbage time.

To add insult, fifth-year Washington senior and former walk-on Owen Biddle, a free safety, made the first start of his college career and led a UW defense that held the Ducks scoreless for the final two quarters.

The win prompted another prolonged UW midfield dance celebration that included a variety of colorful taunts directed at the Oregon players for their unfulfilled promise of revenge.

Since that night 13 years ago, when the Huskies routed the Ducks and danced, this is the mayhem Oregon has inflicted on Washington:

Much has happened during Washington’s 12-year losing streak, the longest in the 113-year history of the UW-Oregon rivalry and UW’s longest losing streak to any conference school, going back to the century before last.

During those 12 years, not only has UW failed to beat the Ducks with QBs Isaiah Stanback, Carl Bonnell, Jake Locker, Ronnie Fouch, Keith Price, Cyler Miles and Jake Browning, it hasn’t really been close.

Since Washington’s 2003 victory, Oregon has twice played for the national championship. Washington hasn’t won a conference title, or even come close. The Huskies went six consecutive seasons without a bowl appearance and have not qualified for anything much bigger than the Fight Hunger Bowl.

After that 42-10 Husky win, the Huskies went 65 consecutive weeks spread over 5½ seasons without an Associated Press national ranking. They went 111 weeks without a ranking higher than No. 22. Over the same period, the Ducks held a national ranking 146 times, including eight weeks at No. 1.

The tally could be worse for UW. Its 12-game losing streak to the Ducks is nowhere close to the conference record for most consecutive victories by one school over another – but it’s inching up the list:

A 13th consecutive loss to the Ducks would be worse than any of the 12 that preceded it, regardless of score and despite the venue (Autzen Stadium). Washington enters as the No. 5 team in the country (Associated Press poll) and a nine-point favorite after opening at 6½.

The Huskies face a team that allowed Washington State, of all clubs, to score six rushing touchdowns last week. The Ducks are expected to use a freshman quarterback, at least for part of the game. A loss at Autzen, to the suddenly beatable Ducks, would thoroughly deflate the Huskies and negate strides they made last week in vanquishing Stanford.

Many of UW’s 12 consecutive losses to Oregon were probably inevitable, given the rise of the Ducks while Washington waded through a mess following the controversial firing of  Neuheisel. A 13th won’t wash with any Washington fan.