Jake Browning accounted for a Pac-12-record eight touchdowns (six passing) in leading the Huskies to a 70-21 rout of Oregon that snapped a 12-game losing streak to the Ducks. 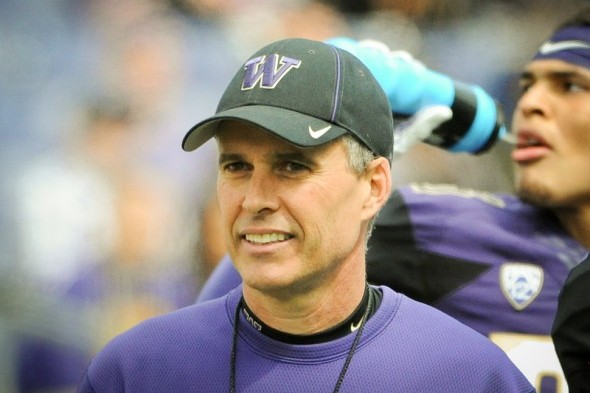 With QB Jake Browning tossing a school-record six touchdown passes and running for two more, Washington put an emphatic end to more than a decade of misery and embarrassment Saturday night with a 70-21 obliteration of Oregon at Autzen Stadium in Eugene (box). The No. 5-ranked Huskies, outscored by an average of 23.75 points during their feeble 12-game losing streak to the Ducks (2004-15), improved to 6-0 for the first time since 1992.

In the first half, Browning threw two TDs, both to WR John Ross, and ran for a pair when the Huskies rolled up a 35-7 lead, handing the Ducks their largest halftime deficit since 2004 and their fourth consecutive defeat. That, literally, was only the half of it.

Washington scored 35 or more points in each game this season (40 or more in five of six) and in nine consecutive contests dating to last year.

Browning’s eight TDs tied the Pac-12 record by QB Pat Barnes of California against Arizona in 1996. Barnes needed four overtimes, so Browning is the first to account for eight in regulation, and he didn’t play the final 10 minutes.

Washington was up 21-0 midway through the second quarter when the Ducks drove to the UW 28-yard line. Oregon’s Royce Freeman ran for 22 yards, but was stripped of the ball by S JoJo McIntosh and recovered by teammate LB Keishawn Bierria. Two plays later, RB Myles Gaskin broke free for 68 yards, setting up Washington’s fourth touchdown. Instead of pulling within 21-7, the Ducks fell behind 28-0.

Browning’s TD throws covered 3, 15 and 3 yards to Ross, 28 and 10 yards to WR Dante Pettis and 44 yards to RB Jomon Dotson. The single-game mark was five, first set by Chris Rowland against California in 1973 and matched by Jake Locker against Oregon State in 2010 and Keith Price against Colorado in 2012.

Browning completed 22 of 28 for 304 yards and ran six times for 21 yards before coach Chris Petersen pulled him with just under 10 minutes to play and the Huskies leading 63-21. Browning has 26 TD passes this season after tossing 16 last year as a freshman.

Gaskin ran for 197 yards, including a 65-yard TD in the first half, and set up the second of Browning’s TD throws with a 68-yard run. Dotson added 61 yards on 12 carries and scored the first TD of his career.

Pettis caught eight passes for 134 yards, Ross nine for 94 and Dotson two for 52. Injured all of last season, Ross has nine receiving TDs this year. Pettis also had a 70-yard punt return TD called back due to a penalty.

Washington rolled up 682 yards, including 378 rushing, the second-highes, single-game total in school history behind the 734 the Huskies racked up against San Jose State in 1996.

Washington held Oregon to 409 yards and limited the Ducks to 6-for-19 on third-down attempts and 1 for 4 on fourth downs. The Huskies generated two turnovers, including an interception by S Budda Baker in the first quarter on the Ducks’ first scrimmage play that set up the first touchdown.

The Huskies had a tougher-than-expected time against Oregon true freshman QB Justin Herbert, making the first start of his college career. Herbert completed 21 of 34 and tossed two touchdown passes.

“It feels great to get out of here with a win. Coming down here to Eugene and playing is always hard. I didn’t feel like I did anything crazy, just went to my reads. We’re not looking ahead. We just have to get through the bye week and get ready for Oregon State.” — Browning

The Huskies take the next week off before hosting Oregon State in their homecoming game Oct. 22. That is Washington’s only home contest in  October.