The Washington Huskies routed Oregon 70-21, Saturday night in Eugene, but were unable to move up in the Associated Press Top 25 poll, landing again at No. 5. 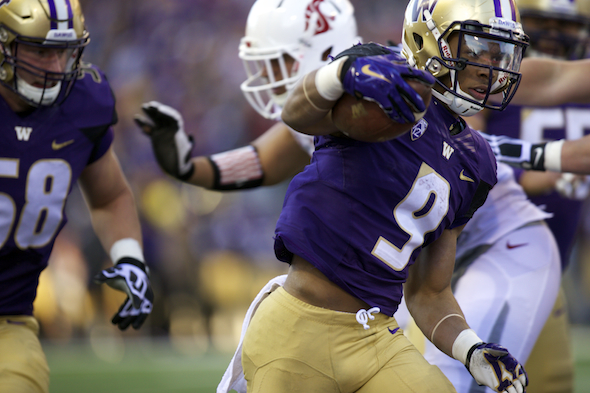 Even with its 71-20 rout of Oregon Saturday, Washington was unable to move up in the Associated Press college football new released Monday. No. 5 last week, the Huskies stayed there this week because the top four teams — Alabama, Ohio State, Clemson and Michigan — scored decisive victories as well.

The Huskies, idle this week and who will play Oregon State in Seattle at 3:30 p.m. Saturday, Oct. 22, also moved up one notch to No. 5 in the coaches poll. At the midpoint of the season, the College Football Playoffs seem clear if all run the table: Alabama, Clemson and Washington, and the winner of the Michigan-Ohio State game.

Stanford, which has lost in back-to-back weeks to the Huskies and Washington State,  dropped out of the Top 25 (for the first time since early in the  2015 season) after entering the weekend No. 15. Colorado (22) and the Cougars (9) also received votes in the AP poll.

The AP poll is normally released on Sunday, but wasn’t published due to Hurricane Matthew, which forced the postponement from Saturday to Sunday of some key games.