The Pac-12 Conference named Washington QB Jake Browning as its Offensive Player of the Week. Browning accounted for eight TDs in the 70-21 win over Oregon. 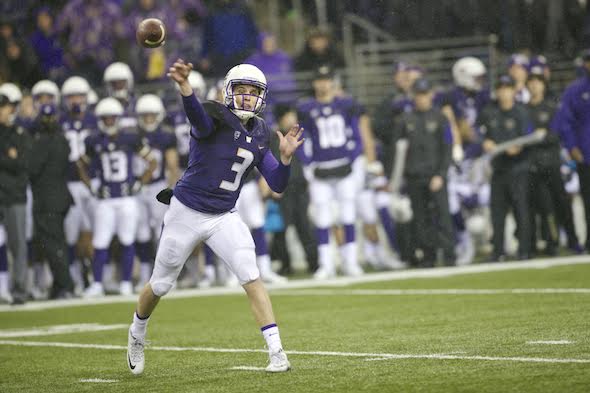 In perhaps the least-surprising sports development of the year, the Pac-12 Conference Monday named Washington quarterback Jake Browning as its Offensive Player of the Week for his recording-breaking performance Saturday in the Huskies’ 70-21 victory over the Oregon Ducks at Autzen Stadium in Eugene.

Browning threw a school-record six touchdown passes on throws of 3, 15, 3, 28, 10 and 44 yards (three of the TDs went to WR John Ross). That broke the record of five, set four times previously, including by Browning earlier this season against Idaho. Browning also ran for a pair of touchdowns, becoming the first quarterback in conference history to account for eight TDs in a regulation game.

Browning, who left the Oregon game with slightly less than 10 minutes to play, led the Huskies to the second-highest scoring effort ever against Ducks. Texas tallied 71 against the Ducks Dec. 6, 1941. Washington’s 70 points are the most scored by a UW team in the post-World War II era. The Huskies scored 66 against the Ducks in 1974.

Browning is the first Washington player to win the offensive award this season. OLB Psalm Wooching was selected Pac-12 Defensive Player of the Week last week for his performance against Stanford.

Browning has 23 touchdown passes in six games this season after 16 last year as a true freshman. The 23 TDs leads the FBS, as does Browning’s passing efficiency mark of 204.9. With six regular-season games remaining, Browning is 10 TD passes shy of matching Keith Price’s single-season school record set in 2011.

Browning already ranks fifth on the Washington career list of touchdown passes with 39.