The Seattle Sounders remained in a playoff spot after a 0-0 draw Wednesday in front of 39,772 at CenturyLink Field, but failed to clinch a place in the postseason. 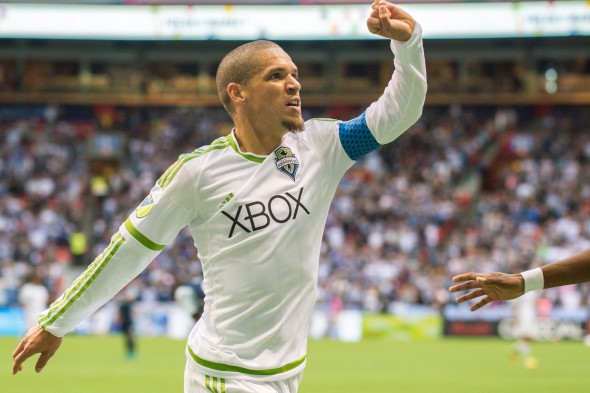 It was a tense night for the Sounders at CenturyLink Field Wednesday. Already battling injuries and suspensions, Seattler put itself deeper into a hole when Osvaldo Alonso was sent off for violent conduct and the team failed to finish off the last-place Houston Dynamo, 0-0. The Sounders have had a suspension in each of the past three matches.

Alonso blew his lid in the 64th minute after becoming entangled in a tackle from Houston’s Will Bruin as Alonso got rid of the ball. Both jumped up and engaged with one another, Bruin grabbing the back of Alonso’s jersey while Alonso repeatedly put his hand into Bruin’s face. Bruin received a yellow card.

“Ozzie has always had a fiery temper,” interim head coach Brian Schmetzer said. “I’m not making excuses for the kid, but he has given us everything since I have taken over. There’s been talk about him being an MVP candidate for our team. What I want from him and the rest of the team is to make sure this stops. We can’t afford to shoot ourselves in the foot.

“Ozzie’s not happy, and the team is frustrated, so we’re going to learn from this.”

Alonso’s red was part of a pattern with Seattle: brain-dead moves by trusted veterans. First was Clint Dempsey’s red during a rout of FC Dallas. Then was Nicolas Lodeiro’s foolish interference with a Chicago Fire free kick Sept. 28. Next was Brad Evans’s attempted head butt against Vancouver’s David Edgar Oct. 2, earning him a red card.

Clearly, Schmetzer’s comments sought to keep the Sounders  (13-13-6, 45 points) from emptying the final rounds of a six-shooter into themselves to kill playoff hopes.

The Sounders roster was heavily influenced by absences. Though Jordan Morris and Nicolas Lodeiro managed a return from international duty before the match—Morris avoided a meaningless friendly against New Zealand and Lodeiro was suspended for Uruguay’s match against Venezuela due to yellow-card accumulation.

Brad Evans observed the game from the pressbox, serving his one-game suspension for the incident in Vancouver. Left back Joevin Jones and backup Oniel Fisher were absent due to national team duty with Trinidad & Tobago and Jamaica, respectively.

Instead, rookie center back Tony Alfaro was pushed into the left back role in his first MLS start, while Herculez Gomez made his eighth start of the season on the right wing.

The problems were compounded in the 11th minute when starting left winger Andreas Ivanschitz went down with what team officials later diagnosed as a right-knee sprain. Ivanschitz was quickly subbed off for Erik Friberg, and walked toward the tunnel with his arms on his head and his jersey pulled over his face.

Friberg would have the match’s best chance with five minutes to play in the first half. He went on a run up the middle and shouldered his way through Houston’s center backs.  Friberg shot the ball into charging Dynamo goalkeeper Joe Willis, and the rebound fell in front of Friberg as he continued toward the goal.

Before Friberg could tap the ball in, Willis dove backward, flicking the ball away before Friberg’s foot could make contact.

Seattle keeper Stefan Frei made a big stop to keep the scoresheet empty in the 30th, when he made a diving stop to his left to push a Will Bruin shot into the post.

After Alonso was sent off, Houston (7-13-12) did not seriously press the numerical advantage, except on corner kicks. A late cramp for Alfaro meant that the youngster left in favor of rookie Oalex Anderson, making his first appearance since Aug 21.

Anderson had a chance to break the deadlock in the 79th minute. Having fought his way into the box, Anderson had Nelson Valdez open to his right, with Morris available at the back post, but the St. Vincent national spun and fired a weak shot with his left foot without picking up his head, sending an easy shot to Willis.

“Oalex is a young player that we have a lot of faith in,” Schmetzer said. “I’m sure that he will learn to be a little more composed inside the box. Those types of moments they come and young players need to be in a few more situations.

“Oalex hasn’t had a ton of playing time this year so as he develops hopefully he’ll be able to see the pass, or if he can score that goal then we’re all going home happy.”

With the draw, the Sounders aren’t quite going home happy. They have to win one of their two remaining games — against FC Dallas on the road Sunday (2 p.m., JoeTV) or in the home finale Oct. 23 against Real Salt Lake (1 p.m., JoeTV) — to clinch a playoff spot. If Seattle fails to win either match, other results from the San Jose Earthquakes and Portland Timbers could wedge the Sounders below the red line at the close of the season.

The Sounders hope all of their late-season temper blunders are purged after Wednesday. Any more and Seattle may wind up settling in for a long winter’s nap.