Matt Ryan, a quarterback Pete Carroll says “is on fire,” leads the NFL in passing yards, average yards per game and passer rating as he prepares to face the Seahawks Sunday. 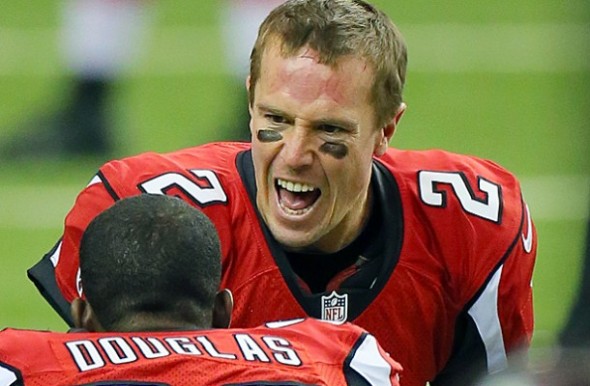 A few bio notes about mostly forgotten Sid Luckman, born Nov. 21, 1916 in Brooklyn, NY: Played college football as a single wing tailback at Columbia University in the mid-1930s, worked his way through school as a dish washer, baby sitter and delivery boy. . . Finished third in the 1938 Heisman Trophy vote . . . No. 1 pick by the Chicago Bears in the 1939 NFL draft . . . Originally declined to play, opting to work for his father’s trucking company.

Luckman changed his mind when Bears owner George Halas dangled in front of him a $5,500 annual contract, enhancing the lure by telling Luckman he was about to become the first T-formation quarterback in NFL history. Our guess: Luckman probably didn’t know what the T-formation was, since no team in those days ran the T, but he gave it a whirl, with the following results:

Luckman’s best year was 1943, when he threw for 2,194 yards and 28 touchdowns in only 202 attempts. That translated into a 107.5 passer rating, then an NFL record. Luckman’s best game was Nov. 14 against the New York Giants, when he became the first quarterback in NFL history with both a 400-yard passing game (443) and a seven-TD game.

Luckman held more than a dozen passing records when he retired in 1950, all but two erased by a parade of developing Hall of Famers, including Johnny Unitas, Joe Montana, Dan Marino, Brett Favre, Peyton Manning, Tom Brady and Aaron Rodgers.

Now we have Atlanta’s Matt Ryan, who leads the 4-1 Falcons against the 3-1 Seahawks Sunday at CenturyLink Field. Ryan is sitting at 10.36, a first down every time he throws, and only a shade behind Luckman’s 10.9.

Five games is a small sample size, but since the 1970 NFL-AFL merger, only one quarterback posted a higher yards per attempt number through five than Ryan:

“He’s off to a great start,” Seahawks coach Pete Carroll said this week. “He looks the best that he’s ever looked, but he’s had a lot of years where he’s been highly productive. He’s in that mode again, he’s really going. He’s clicking with the receivers, the running game is sharp and clean, the protections have been good.

“They move him a lot. He gets all over the place with their actions. It’s hard to zero in on him, and he’s taking full advantage of it. He looks like he’s as right as he’s been.”

“Matt Ryan has been having a phenomenal year,” added CB Richard Sherman. “So we’re going to have a good time with that challenge.”

Ryan has defeated both of last year’s Super Bowl participants. He threw for 503 yards (300 to Julio Jones) and four touchdowns while completing 75.7 percent of his passes in a 48-33 win over Carolina two weeks ago. He followed with a 98.4 passer rating in a 23-16 win at Denver Sunday, the first loss of the season for the defending champions.

“They’re on fire,” Carroll said of the Falcons. “This is a high-flying team right now. They’re on it. They had to endure some issues, too, guys were getting banged up and they overcame that. They had a fantastic win at Denver against an undefeated team. Their offense is just out of this world right now. “

Atlanta is averaging 35 points per game, No. 1 in the NFL. Inside that number: The Falcons are averaging a staggering 7.2 yards per play. The 2013 Seahawks, winners of Super Bowl XLVIII, averaged 5.6 (6.2 per play in the 43-8 win over Denver). Only three teams since 1960 had a better yards per play mark through five games than these Falcons.

Two glimmers of good news for the Seahawks: None of the charted teams won a Super Bowl and two finished 8-8 after getting off to fast starts. And while the Falcons have been soaring offensively, they allow 28 points per game, which ranks 26th out of 32, odd given head coach Dan Quinn’s pedigree as Seahawks defensive coordinator for the Super Bowl triumph. Still, the Seahawks won’t want to get into a shootout.

“(Quinn’s) got his guys playing very hard, which is cool to see,” said offensive coordinator Darrell Bevell. “They run to the football, they hit, they create some turnovers. They’re doing a good job. It’s going to be fun.”

“Their quarterback is on fire,” added Carroll. “Overall, they’re doing a great job. I know Dan is fired up about it and we’re excited. It’ll feel like a championship matchup, just like we like.”