The Seahawks (4-1) overcame a litany of mistakes and botched plays in the second half and rallied for a 26-24 victory over the Atlanta Falcons Sunday at CenturyLink Field. 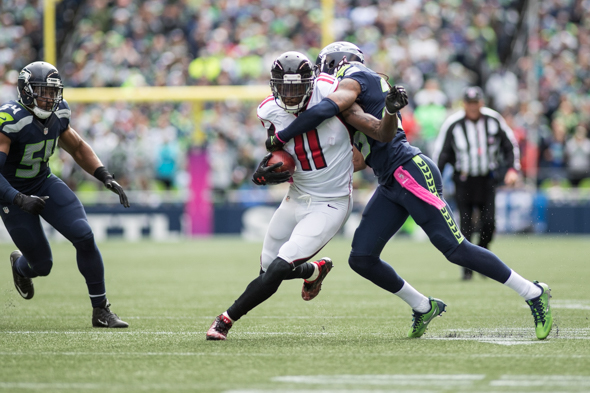 The Seahawks squandered a 17-3 halftime lead and trailed 24-17 entering the fourth quarter, but rallied for a 26-24 victory over Atlanta Sunday at CenturyLink Field. To win, Seattle had to overcome a helmet-slamming hissy fit by Richard Sherman, a botched field goal attempt, a missed extra point by Steven Hauschka, and a no-call on a potential pass interference by Sherman that could have set up the winning field goal for the Falcons in the final minute (box).

The Seahawks returned from their bye week and raced to the halftime lead on TD runs by RBs Christine Michael and rookie Alex Collins and a 42-yard field goal by Hauschka, while smothering QB Matt Ryan and Atlanta’s No. 1-ranked offense. In the first two quarters, the Seahawks sacked Ryan three times and hit him 11 times.

But Ryan, off to one of the best starts by a quarterback since the 1970 merger, threw for 222 yards and three touchdowns in a wild third quarter as the Seahawks twice gave up TD passes on dramatically blown coverages, which prompted Sherman to launch into a sideline rant at defensive coordinator Kris Richard.

Following the Sherman eruption, the Seahawks had a chance to pull within four, but a mishandled snap resulted in Hauschka missing a 29-yard field goal. After Seattle pulled to 24-23 with 4:43 left on Michael’s second rushing TD, Hauschka’s extra point was blocked.

Then came the key sequence.

With 3:48 remaining, Ryan looped a throw to WR Julio Jones, but the ball escaped his hands and was tipped by Sherman, then picked off by FS Earl Thomas and returned to the 50-yard line. After QB Russell Wilson and Collins collaborated on a drive-saving pass completion on third down, Hauschka drilled a 44-yard field goal for what proved to be the winner with1:57 left. On the the Falcons’ final possession for a shot at a field goal range, the Seahawks defense forced Ryan into four consecutive incompletions.

Sherman, at the center of two miscommunications that led to a pair of Atlanta TDs in the third quarter, impeded Jones on a long, fourth-down throw that could have set up Atlanta for the winning field goal. But Sherman got away with it, and Seahawks survived to improve to 4-1 and a two-game lead in the NFC West.

Wilson completed 25 of 37 passes for 270 yards without a touchdown or interception for a rating of 88.8. He has directed 20 fourth-quarter, game-winning drives in his career. The win was his 50th in regular-season play. Wilson is 30-5 at the Clink since 2012.

The Seahawks managed 72 rushing yards (64 by Michael). That snapped a streak of 25 consecutive 100-yard rushing games by Seattle. The rushing TD by Collins was the first of his NFL career.

TE Jimmy Graham led Seattle with six catches on nine targets for 89 yards, and RB C.J. Spiller came out of the backfield with three catches for 38. WR Doug Baldwin had four receptions for 31 yards, WR Jermaine Kearse three for 35 and Michael three for 19. Graham was looking to become the first TE in Seahawks history to post three consecutive 100-yard receiving games.

Playing without SS Kam Chancellor (groin) and DT Frank Clark (hamstring) and much of the second half without DE Michael Bennett (knee),  the Seahawks had four sacks, two by DE Chris Avril, and one each by rookie DE Jarran Reed and DE Cassius Marsh.

Seattle hit or sacked Ryan 11 times on his 17 dropbacks in the first half and held the Falcons to 86 yards, 15 rushing. Atlanta went 0-for-6 on third down in first half before the Falcons busted loose in the third quarter on Ryan TD throws to Jones (36 yards), Mohamed Sanu (10) and Levine Toilolo (46).

After Ryan’s poor first half (76 yards), he finished with 335 yards and three TDs with one interception for a rating of 102.8.

“They (Atlanta) had been kicking butt with that offense all season so far, so it was an extraordinary job by our team and great resolve showed by this group. Earl (Thomas) made a big pick that gave us a chance at the end. We had an great burst defensively to finish the game.” — Seahawks coach Pete Carroll

“We had a few misplays (in the secondary) and they scored, hitting on a couple (of touchdowns) that were uncharacteristic of us. We just misplayed a few plays.” — Carroll

“We were able to find a way, we had a will to win, and that’s the key. We played a very, very good defense. We finished plays and finished drives.” —  Wilson

“It was frustrating to give up two bogus touchdowns. We had some busted coverages, things that we’ll clean up in the film room.” — Sherman

The Seahawks are 16-0 under Carroll when leading at halftime and 4-3 coming out of a bye week . . .Bennett went to the locker room after being cut-blocked by Falcons LT Jake Matthews, then returned to the field in uniform but didn’t play down the stretch. Carroll said it did not appear to be serious . . . TE Luke Willson also had a knee injury. No word on the prognosis . . . Seattle leads the series with Atlanta 10-5 . . . The Seahawks extended their streak to 93 games with a lead or within one score of the lead in the fourth quarter.

The Seahawks travel to Arizona next Sunday for a 5:30 p.m. NFC West matchup with the Cardinals (NBC).