The Seahawks have played 633 regular-season games in franchise history, and won only three times when they allowed the opposing quarterback to throw three TDs in one quarter. 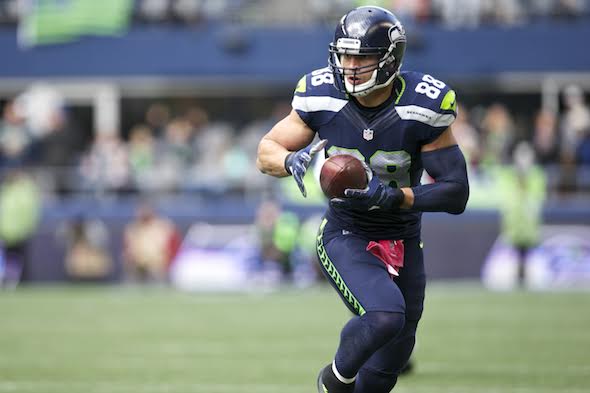 TE Jimmy Graham had a big first half Sunday as the Seahawks built a 17-3 lead over Atlanta.  / Drew Sellers, Sportspress Northwest

The Seahawks came off their bye week Sunday and rolled to a 17-3 halftime lead over the Atlanta Falcons with an offense that played efficiently, especially the combination of Russell Wilson and Jimmy Graham. The defense turned in a sublime performance, especially considering the Falcons entered as the No. 1-ranked offense in the NFL (35 points per game).

Seattle held QB Matt Ryan, averaging a league-high 348 passing yards, to 76, sacked him four times, banged into him nearly a dozen times, and kept Atlanta to 15 rushing yards. Couldn’t have been much better. At that point, the game had the earmarks of a CenturyLink rout.

But the trend flipped almost as soon as the third quarter commenced, when Ryan took advantage of busted coverage in the Seattle secondary and hit WR Julio Jones with a 36-yard touchdown that sent CB Richard Sherman into a Krakatoa-level event on the sideline.

As the FOX cameras zeroed in, Sherman got in the faces of defensive coordinator Kris Richard and injured SS Kam Chancellor, among others. Sherman’s mood didn’t improve when, five minutes of game clock later, Ryan found WR Mohamed Sanu for a 10-yard score.

By the time Ryan exploited another busted coverage and found a wide-open WR Levine Toilolo for a 46-yard TD, Seattle’s secondary had been spectacularly reduced to mush. FOX panned several times to Sherman sitting alone and grim-faced on the bench, stewing over what Sherman later described as “two bogus touchdowns.”

“We should have never given them points,” Sherman said. “We could have stopped them. We could have held them to nothing. They scored on blown coverages. It’s frustrating. We’ll go over the film and make the adjustments, and then we’ll move on.”

The Seahawks rallied to win 26-24, and might have won by more if Steven Hauschka didn’t have blocked an extra point, and if he hadn’t missed a 29-yard goal field goal attempt. But that they won at all was remarkable: In 41 seasons, the Seahawks have won only three games when allowing an opposing quarterback to throw three TDs in a single quarter.

No wonder Sherman seemed shocked and outraged. Until Ryan did in the third quarter Sunday, the Seahawks hadn’t endured such an onslaught since Nov. 21, 2010, Pete Carroll’s first year in Seattle. Sherman was still playing for Jim Harbaugh at Stanford.

In that game, Drew Brees of New Orleans cranked out three TDs in the second quarter, two to Marques Colston, to lead a 34-19 Saints romp in the Superdome.

Before Ryan Sunday, Seattle hadn’t won when the opposing QB tossed three TDs in a quarter since Sept. 24, 2006 vs. Eli Manning and the New York Giants. And before that, Seattle’s last winning date in such a contest was Sept. 18, 1983 against Dan Fouts and the San Diego Chargers — five years before Sherman was born.

Opposing quarterbacks have thrown three or more TDs in a game against Seattle 79 times. In only 14 did the opposing QB do it in one quarter (W-L=Seattle win or loss):

Rare as was the Seahawks winning after allowing the opposing quarterback to pitch three TDs in a quarter, nearly as rare was that Seahawks won for only the eighth time in franchise history when their kicker missed both an extra point and a field goal.

Hauschka couldn’t overcome a low snap and missed a 29-yard field goal early in the fourth quarter that would have sliced Atlanta’s lead to 24-20. A low kick on a PAT by Hauschka with 4:43 remaining was blocked, preventing the Seahawks from tying at 24.

But Hauschka’s 44-yard field goal at 1:57 won it. He is of five kickers in team history (third to do it twice) to miss both a PAT and a field goal and still walk off a winner.

Given Ryan’s third quarter and Hauschka’s misadventures, it marked an odd and chaotic win for the Seahawks, 4-1 after five games for the first time since 2013.