It’s a down year for Pac-12 football, especially at quarterback. But Washington has the best QB in the conference, and a clear path to an unbeaten regular season — if the media doesn’t stop them.. 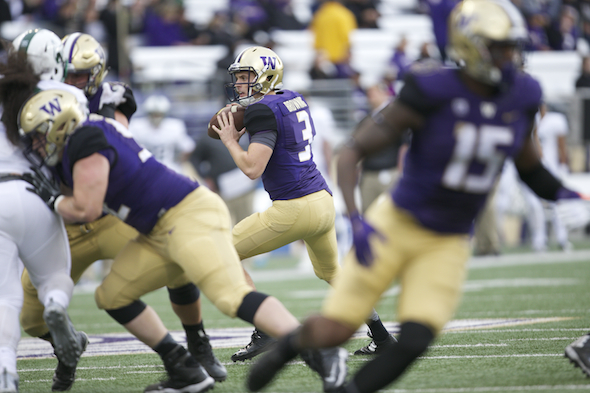 Jake Browning’s game is the biggest difference-maker in a down year for QBs in the Pac-12. / Drew Sellers, Sportspress Northwest

News that Oregon State is down to a third-string quarterback, sophomore Marcus McMaryion, makes for a gruesome outlook Saturday when the Beavers show up at Husky Stadium (3:30 p.m., Pac-12 Networks). This was the same kid who was splattered by the Huskies last year in a 52-7 loss at Corvallis in which the Beavers had as many first downs as pass completions by McMaryion — eight.

And that was when the Huskies were 4-6 and in danger of missing out on the most minor of bowls. Now they are 6-0, ranked fifth in both polls and are the freshest national darling in college football.

Even though it’s a Pac-12 Conference game, this will be another weapons-grade cringe similar to Washington’s exhibition season with Rutgers, Portland State and Idaho. McMaryion doesn’t even have the modest element of surprise after replacing starter Darell Garretson (ankle) and backup Conor Blount (knee), both of whom went down in OSU’s 19-14 loss to No. 21 Utah Saturday in a driving rain in Corvallis.

“McMaryion played against us last year, so we’ll have some tape there,” said Huskies coach Chris Petersen this week. Now you know part of why the 2-4 Beavers are 33-point underdogs.

Petersen also noticed the Pac-12’s QB problem has worked in his team’s favor a lot this season.

The Huskies have had the good fortune of drawing backup QBs for the games at Arizona  (Brandon Dawkins in place of Anu Solomon) and at Oregon (freshman Justin Herbert in his college debut in place of Dakota Prukop).

In the other conference game against Stanford, senior Ryan Burns demonstrated the great Stanford QB tradition has taken a one-year hiatus.

It’s true that Dawkins ran the Huskies defense silly in Tucson (176 yards and two touchdowns rushing, 167 yards and another TD passing) to provide  the only close game of the UW season, a 35-28 win that required overtime.

But now the Wildcats have degraded from that splendid effort to the point to where they are 0-4 in conference and 2-5 overall. They lost 48-14 Saturday to USC while finishing the game with a 17-year-old freshman, Khalil Tate, at quarterback, because Dawkins (ribs, concussion) was out. Tate’s backup for Saturday’s game with Stanford is a tight end.

None of these woes are the problems of the Huskies, except for the fact that since Washington has ascended to the heights of consideration for the four-team College Football Playoffs, the sudden weenie-ness of the Pac-12 is a potential factor.

As the season progresses, the three conference wins begin to pale because the opponents appear increasingly feeble. That won’t change Saturday.

The remaining five foes are capable of hanging a loss on UW if the Huskies take a dirt nap. But they will be favored in each partly because the only proven quarterback among them is Washington State’s Luke Falk. And with the abuse he takes weekly, it’s fair to wonder if he will last to the Apple Cup. He didn’t last year.

Washington travels to the only other Pac-12 school in the rankings, Utah, Oct. 29. The 8-1 Utes have a former Husky, Troy Williams, at quarterback. He transferred out when he knew he wasn’t going to get playing time at Montlake. After his 4-for-13 passing day against the Beavers Saturday, it appears the decision may be good for UW again. He’s 10th in conference passer efficiency. The Utes also have lost five starters to injury.

The three remaining games before the Apple Cup — at Cal, then home for USC and Arizona State — have varying degrees of upset potential.

The 3-3 Bears have a quality senior transfer at QB in Davis Webb, but are 11th in the conference in defense. The 4-3 Trojans have a freshman star, Sam Darnold, at quarterback, but is fumble-prone. The 5-2 Sun Devils were crushed 40-16 Saturday by Colorado, when QB Manny Wilkins, playing on a bum ankle, was sacked five times and led ASU to 199 yards of total offense. He’s ninth in the conference in passer efficiency.

As you can see, the Pac-12 is down overall this year, especially at quarterback. At 204, Huskies QB Jake Browning’s passer rating is nearly 40 points better than second-place Darnold.

So it’s a good time to have a great team at Washington, even though Petersen hates hearing that almost as much as he hates media playing out the season six games at a time.

“You guys want to keep putting these expectations on these kids. All we’re trying to do is win the next game. That’s the bottom line. If we can beat you guys on this game, and keep our kids focused, then that’s really good for the Dawgs.”

Well, if Petersen thinks his schedule is soft enough to entertain another opponent, the media, that’s his prerogative. But he has an unspoken point  — he understands that a single loss will likely derail the Pac-12 champion from the playoffs because of the relative weakness of schedule.

He has the QB, the schedule and, so far, good roster health. All he needs is an edge for six weeks of lesser opponents. That was the way it was for eight years at Boise State, where he was 92-12. The guess is here too, he has the formula.