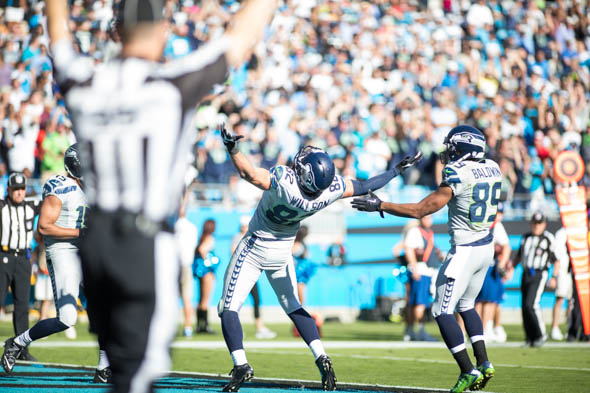 Luke Willson, here with the game-winning catch against Carolina in 2014, tweeted Tuesday from his hospital bed. / Drew McKenzie, Sportspress Northwest

The Seahawks Tuesday placed DL Garrison Smith on injured reserve and re-signed DL Sealver Siliga, who joined the club in March as potential replacement for departed free agent Brandon Mebane. He was released in August with an injury settlement (calf). Also, TE Luke Willson, who had a knee injury Sunday, tweeted from his hospital bed Tuesday.

“Thanks 12s for all the well wishes,” Willson wrote. “The healing started today and if all goes well, I’ll be back helping the @Seahawks in no time!”

Thanks 12s for all the well wishes. The healing started today and if all goes well, I’ll be back helping the @Seahawks in no time! pic.twitter.com/daBcBZUI6s

Willson did not specify whether he had undergone surgery for cartilage and/or ligament damage, nor did the Seahawks offer an explanation on Tuesday’s off-day for players.

Willson was injured on Christian Michael’s touchdown run in the 26-24 win over Atlanta. He had to be helped off the field. In his absence, Brandon Williams, a fifth-year pro from Oregon, likely will be advanced to the No. 2 tight end spot behind starter Jimmy Graham.

Williams, 29, a 6-3, 247-pounder, has played mostly special teams and has not caught a pass. He has four career receptions for 44 yards.

Siliga signed with the Seahawks as a free agent and they planned to use him as a run stuffer in the Mebane mold. He played 13 games for New England last season and was part of the Patriots’ last-minute, goal-line stand in the 2014 Super Bowl, when an interception by CB Malcolm Butler denied the Seahawks a second consecutive championship.

The 24-year-old Siliga, who played college ball at the University of Utah, was with the Seahawks briefly in 2013 after they acquired him from the Denver Broncos.

Smith played 19 snaps against the Falcons after he was listed as questionable with an oblique injury. The Seahawks signed him Sept. 4 to add depth to the defensive line.

DE Michael Bennett also had a knee injury Sunday when he was cut-blocked and didn’t play most of the second half. Carroll was more upbeat on his prognosis.

“He’s doing pretty good. His tests came out clear, so he just got banged on his knee,” said Carroll. “I think he’ll be ready to play Sunday.”

As for SS Kam Chancellor, who missed the Atlanta game with a groin strain, Carroll described it as mild.

“He’s coming back from a groin that happened during (last) week,” Carroll said. “We didn’t think that he would be able to hold up during the course of the game. He feels a lot better today and we just have to go day by day and figure that out.”