The sideline rant by CB Richard Sherman wasn’t the Seahawks’ only dubious deed Sunday. RB Christine Michael went out of bounds when he should have sought more yards, Carroll: “We coached him up.” 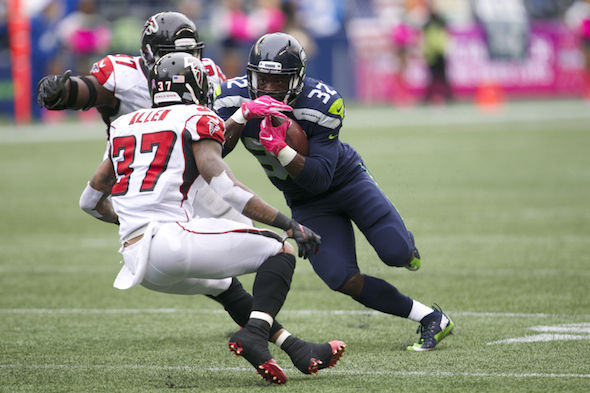 If there were only one game on the 2016 regular-season schedule that the Seahawks could deploy a healthy RB Thomas Rawls, Sunday at Arizona would be it. Barring, of course, a social media post that shows Marshawn Lynch has taken his cleats off the wire. (Hasn’t happened yet, Pete Carroll — just having a little pre-Halloween scare for you.)

The urgent need for the bruising style of Rawls, out a few more weeks with a broken fibula, is because the Seahawks’ running game has been so mediocre, and Arizona’s defense, particularly with its all-star secondary, is entirely capable of throttling a pass-heavy offense.

As Tom Cable put it Wednesday about the Seattle running game, “Sometimes, it’s not worth a damn.”

For a game against the defending NFC West champs at 3-3 — on the road with a two-game value because it’s a divisional foe, facing a team not as good now as it is likely to be later  — it’s crucial for the Seahawks to have a balanced, effective attack.

To Cable’s point: The Seahawks, long the flag-bearer for a ground game of spikes and gravel, are a sissy 30th in the NFL in yards per carry at 3.3 yards per attempt and 25th in yards per game at 88.8. Lynch used to get that much getting out of bed to brush his gold grill.

Specific to the game Sunday, it is absolutely not the time to have RB Christine Michael run out of bounds at the end of a run where more real estate was obtainable.

As much as CB Richard Sherman’s disorderly sideline conduct was Topic A coming out of Sunday’s 26-24 win over Atlanta, Michael violated club code when, instead of running hard into a tackler for an extra yard or two when he reached the secondary, he cruised out of bounds. It was a late-stage Shaun Alexander flashback.

Carroll Wednesday acknowledged the violation and said steps have been taken.

“We coached him up a little bit there,” he said. “Smart decisions are always at hand for us  to take that hit off of him (by going out of bounds) if he’s ahead of the sticks when we’re in the first-down area. I can understand that.

“But when you leave us at second and one, we need the first down. He needed to understand that and be aware of that.”

Michael did all right Sunday, getting 64 yards in 18 carries that including two touchdowns, and caught three balls for 19 yards. He also had a fumble that he recovered and had only one explosive run (21 yards).

But the Falcons defense is not the caliber of the Cardinals defense, which is nearly as good statistically as Seattle’s, giving up only 295 yards a game (tied for fourth in the NFL) and 17.3 points (sixth). Seattle leads in the NFL at 283 yards and is third in points (15.6).

Michael and the rest of the offense need to deliver on the ground hard and often to reduce the pressure on the defense for perpetual bailouts. As the Falcons proved Sunday, the defense can be had for a time.

The Seahawks have done the balance thing well against Arizona, scoring 36, 35 and 34 points in their last three trips to the desert, all wins. But the games included a more spritely QB Russell Wilson, who has consistently driven nuts the mean, meaty Cardinals pass rushers. Thanks to injuries, Wilson this season has 35 yards on 21 carries.

The flip side is that he has thrown only one interception and has been sacked only 10 times. The passing game has continued to mature. But Carroll misses his team’s trademark style.

“We’re OK,” he said, without enthusiasm, about the ground game. “We just need more emphasis added, more turns. We need to run it more. When I was counting completions and carries, we hit a good number. We hit 50-something last week, but it wasn’t as we pictured it.

“We pictured to run the ball a lot at the end of that game, and we didn’t get the opportunity to.”

Offensive coordinator Darrell Bevell admitted the playbook has been shortened.

“It’s a different run game that we’re using right now,” he said. “It’s still a part of us, it’s still something that we’ve always had, just the zone read part of it is not used as much. We’ve gone to other styles of runs.”

None of the plays, however, include a glide out of bounds at the end.

He shrugged off the potential for lingering consequences from the episode, which began after WR Julio Jones was left uncovered, thanks to a mix-up in defensive signals, for a touchdown pass. Defensive coordinator Kris Richard shouted at Sherman as he approached the sideline, which ignited Sherman’s bellicose response.

“We’re a ball club, things happen,” he said. “We came out with the win and we move on to next week. It’s another opponent. Everything starts over.”

TE Willson out, RB Prosise back

Carroll said TE Luke Willson’s injured knee required only arthroscopic surgery Tuesday and expected a “miraculous recovery,” but not likely by Sunday. “It was less (damage) than anything that they expected, so everybody was really fired up about that. They barely had to do anything at all to fix it.”

Carroll said rookie RB C.J. Prosise, after five weeks, finally has recovered from a broken wrist bone and will play, which should give the offense a third-down weapon for which the coach has lusted.

““I’m really excited about C.J.,” he said. “I’m really hopeful that he’s going to be a factor to help us. This is preseason for him, so we’re just getting going. We’re not going to do too much with him too early, but I don’t think there’s anything he can’t do.”