Washington’s ground game is much more than just the Huskies’ breakout star of a year ago. Myles Gaskin is joined by Lavon Coleman and Jovon Dotson to make what is the Pac-12’s most dominant backfield. 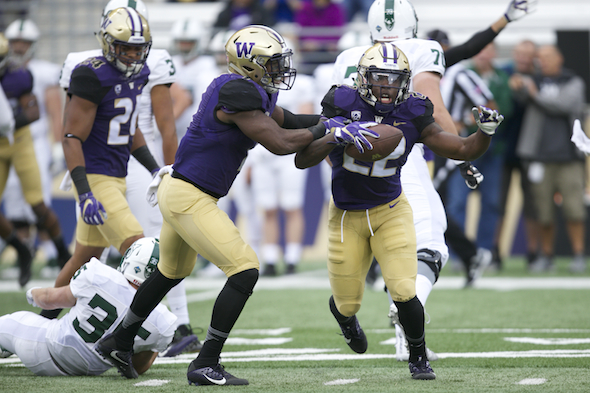 Before the season, many predicted that the University of Washington’s ground game would be titled, “The Myles Gaskin Show.” Midway through the schedule, however, the Huskies have struck a balance of reps between sophomore Gaskin and junior RB Lavon Coleman, with sophomore Jomon Dotson added to create a three-headed beast that has crumpled defenses.

Gaskin, from Lynnwood and Seattle’s O’Dea High School,  has 599 yards on the ground from 98 attempts (6.1 yards per carry) and five rushing touchdowns, averaging just under 100 yards per game. He’s third among Pac-12 rushers, six spots ahead of Coleman, with 395 yards on 44 carries, for an average of nine yards every time he touches the ball.

The coming-out party for Coleman, from Lompoc, CA, was against Arizona Sept. 24, when he racked up 181 yards on just 11 attempts, including a 55-yard, off-tackle run that left Wildcats defenders eating turf behind him.

“We always call our room the stable,” Bhonapha said after practice Wednesday. “It’s always good when you have three guys going, especially in the middle part of the season. It’s a long football season, and the more game reps guys have, the more productive, the more savvy, they’re going to be.

“I think Myles is probably a little more of your shifty, vision guy in tight spaces and balance. You think of Lavon as your power guy who’s going to break a couple tackles. Jomon is your long, linear guy you can do different things with, throw the ball to him out of the backfield. We want these guys running the ball, making guys miss in space and running after contact.”

Bhonapha takes pride in what his backs have in common.

“Great effort, great attitude, and being tough,” he said.

For Coleman, the competition helps elevates everyone without devolving into bickering over the number of touches.

“Everybody pushes each other to the limits,” Coleman said. “After every run, we come back to each other: ‘What did you see?’ It’s a competitive friendship. Everybody meshes well together. We just want to be the best backfield in the conference.

“Everybody has that internal fight — no matter who says it, no matter who lies about. But no matter how many carries you get, you don’t see bad attitudes. You see everybody cheering each other on. You can see it on everybody’s faces. We’d rather carry the ball a couple of times than walk away with a loss. We’re looking for wins more than personal glory.”

The internal competition described by Coleman is what coaches hope for, to spur development and stay sharp. Despite the sharing, Gaskin’s numbers have hardly changed — in his surprising freshman season, he averaged 100 yards per contest.

The rest of the stable has hit its stride, too. For Coleman, Washington’s heaviest back at 211 pounds, extra motivation is provided by the impending growth of his off-field team — a son to be named Kyrie, due in December.

Coleman lit up when asked about Kyrie.

“It’s exciting,” Coleman said. “He’s only a couple weeks away, and I have way more energy and excitement now. Knowing that that’s going to be my son watching me, even though he can’t see probably past his fingertips. Knowing that he’s watching dad play, let’s put on a show for the little man.

The group’s motivation carries to other areas of football. Coleman says the backs take as much pride in providing pass protection for QB Jake Browning as they do slipping through the secondary. Special teams, where Coleman and Dotson play, are also opportunities.

“No (recruiter) ever tells you that you’re going to play special teams,” Coleman joked. “You’re recruited as a running back, as a linebacker, that’s all you’re expecting to play. When we got here, (the coaches) really made an emphasis that this is your gift to the team, playing special teams.”

The rah-rah attitude might be difficult to believe if the Huskies weren’t dismantling foes. If Gaskin, Coleman, and Dotson continue their dominance in the season’s second half, there will be a lone candidate on the ballot for the Pac-12’s best backfield when the season is done.