Seahawks coach Richard ‘has to calm down’

Defensive coordinator Kris Richard fell on his sword Thursday, saying the confrontation with CB Richard Sherman was his responsibility: “Maybe I need to calm down.” 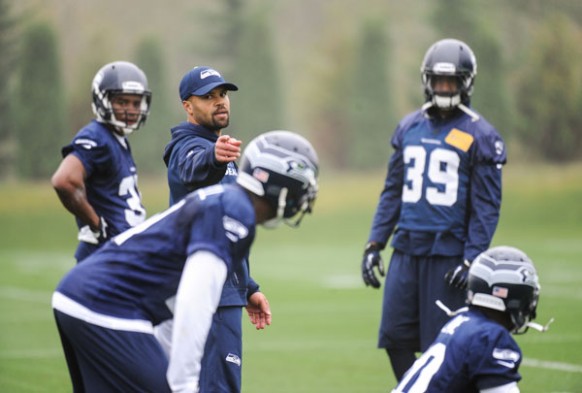 The man in the middle of the CB Richard Sherman vortex on the sideline Sunday, defensive coordinator Kris Richard, took responsibility for the rare display of public discord among the Seahawks.

“I’m very hard on our guys — I coach them hard,” he said after practice Thursday. “In light of those situations, maybe I need to calm down. Just relax, take it all within itself . . . we gotta know that nobody wants to harm this defense.”

Richard, in his second year as coordinator, began yelling at Sherman as he left the field in the third quarter following a 36-yard touchdown reception by a wide-open WR Julio Jones that cut Seattle’s lead to 17-10. Sherman exploded, slamming down his helmet and confronting Richard, as well as teammates who attempted to intervene.

Sherman and coach Pete Carroll afterward said there was a miscommunication from SS Kelcie McCray, an injury sub for Kam Chancellor, that left Sherman in man coverage on another receiver while the rest of the defense was in zone.

“I’m working my hardest to be a better coach,” Richard said. “Because that’s really where it comes down to. I’m responsible for that. When things go wrong out there, I look right into myself, where I can improve, to make sure our guys will not be put in that position.”

Richard acknowledged that he was surprised at angry reaction from Sherman.

“We have to know we have to respond better,” he said. “Everybody hurts in those situations. In the light of it, what could I have done better?”

Of the intervention by teammates that eventually calmed Sherman down, Richard said, “That’s love. That’s guys recognizing a situation escalating, and doing everything in their power to make sure it’s not going to distract or stop us.”

Richard, who at 35 was the youngest coordinator in the NFL at the time of his promotion, said he and Sherman have talked.

“It’s a great, valuable learning experience for everybody,” he said. “The things we lay our hat on is the way we all responded. Our love and brotherhood came through. It showed itself strong. Everybody was not willing to let (Sherman) go, to let go what we have. We’re all willing to do what it takes to make sure we get better.”

The Falcons scored two more passing touchdowns in the period before the Seahawks regained their defensive wits and shut down Atlanta until the offense revived for a 26-24 triumph.

TE Jimmy Graham did not practice Thursday, according to the Seahawks injury report. The problem was listed as knee/hip, but no elaboration was provided. He participated earlier in the week, but coach Pete Carroll won’t be available until Friday to provide details.

Graham, who has been listed on the report most of the time since his return played virtually the entire game in the 26-24 win over Atlanta Sunday, catching six passes for 89 yards. In the past three games, he has 18 catches for 302 yards and a touchdown.

Graham in December had patellar-tendon repair surgery after being injured Nov. 29. An arduous rehab following a difficult injury was regarded as successful, at least until now.

Again sitting out was SS Kam Chancellor, whose groin strain kept him out of Sunday’s game. Carroll said Wednesday that Chancellor could be a game-time deicision.

OLB Kevin Pierre-Louis, who replaced injured Mike Morgan in the lineup Sunday, was also a new addition to the report with an ankle injury that kept him out.