Washington raced to a 38-3 lead and then eased before dispatching 37-point underdog Oregon State 41-17 Saturday night. The Huskies improved to 7-0, 4-0 in Pac-12 play. 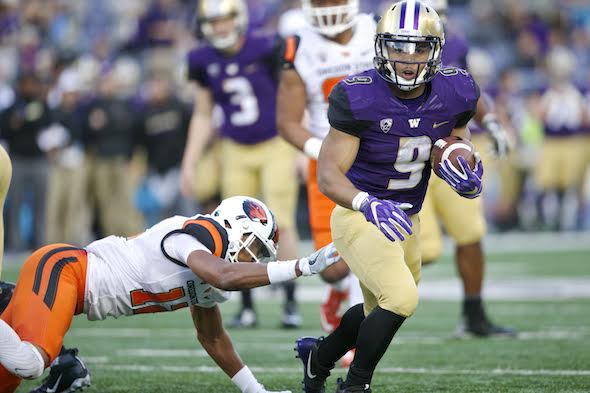 Jake Browning threw a 19-yard touchdown pass to freshman WR Aaron Fuller on the fifth play from scrimmage and Washington romped to a routine, 41-17 victory over 37-point underdog Oregon State Saturday at Husky Stadium (box). Fifth-ranked Washington improved to 7-0, its best record to start a season since the 1993 team began 8-0.

The Huskies have an opportunity to move up a notch in both the Associated Press and Coaches polls since No. 2 Ohio State lost at Penn State 24-21 Saturday night. Earlier, No. 1 Alabama crushed No. 6 Texas A&M, 33-14 and No. 3 Michigan wiped out Illinois 41-8. No. 4 Clemson was idle.

Browning had three more touchdown passes, bringing his season total to 26, and ran for a score as the Huskies marched to a 31-0 halftime lead. In addition to the dam-breaker to Fuller, Browning connected on scoring throws of 23 and 41 yards to Dante Pettis.

Washington held a 38-3 lead midway through the third quarter but then went into snooze mode on both sides of the ball, especially defensively. The Beavers responded with a 75-yard TD run by WR Victor Bolden and on a nine-yard run RB by Tim Cook following a blocked punt.

On the third play of the game, Browning, on a flea-flicker, found a wide-open WR John Ross for a 51-yard gain to the Oregon State 10-yard line that set up Browning’s 19-yard TD to Fuller with only 1:38 elapsed. The Huskies also needed only 1:29 to score their second touchdown as they established dominance over the injury-depleted Beavers.

Browning, who departed with nine minutes remaining, didn’t have his most efficient outing, completing 14 of 28 for 291 yards after entering with a 72 percent accuracy mark. But he didn’t throw an interception and his three TDs moved him to within seven of Keith Price’s 2011 school record of 33.

RB Myles Gaskin carried 18 times for 128 yards and scored on a nine-yard run in the second quarter. The 100-yard game marked the 11th of sophomore’s career. It followed a 197-yard effort against Oregon two weeks ago. UW finished with 219 rushing yards.

UW featured two 100-yard receivers as Ross caught four balls for 115 yards and Pettis four for 112. Fuller finished with 49 on four receptions. This is the first game in which UW had a pair of 100-yard receivers since 2002 when Reggie Williams (116) and Patrick Reddick (105) did it vs. California.

Washington allowed 177 rushing yards and 325 overall. Washington entered allowing 140.2. Cook ran for 108 for the Beavers, nearly as many as quarterback Marcus McMaryion had throwing (148).

CB Austin Joyner made the defensive play of the game for Washington when, with 3:32 remaining, he made a leaping, one-handed, sideline interception that denied Oregon State a final scoring opportunity.

“I think we played hard and it was good to get a win. Our guys were rested up and we played a pretty good game for the most part.” — UW coach Chris Petersen.

Washington, 4-0 in conference play for the first time since 1997, has defeated Oregon State five consecutive times and 21 of the past 29 and improved its lead in the rivalry to 63-34-4 . . . Oregon State fell to 2-5, 1-3 . . . Washington has won 10 consecutive games, a streak that started with its victory over the Beavers in Corvallis last season. This is Washington’s longest win streak since 12 in a row during the 2000-01 seasons . . . The Huskies have scored 40 or more points in nine of their past 10 contests, including six of seven this season . . . Petersen is 16-0 in his career following a bye week.

The Huskies play back-to-back road games, starting with an Oct. 29 visit to Salt Lake City to face the Utah Utes (12:30 p.m.). Washington then plays at California Nov. 5 before returning to Seattle for a Nov. 12 meeting with USC.