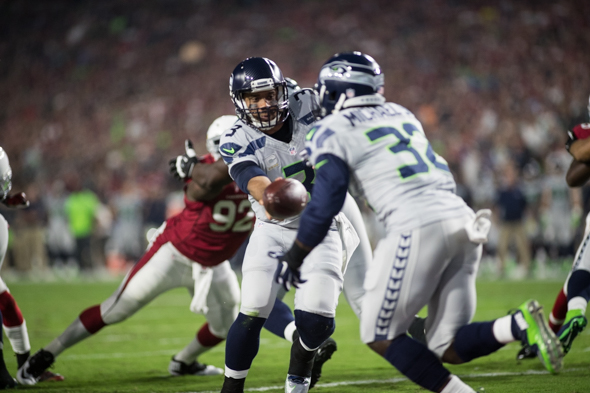 Arizona’s Chandler Catanzaro and Seattle’s Steven Hauschka both botched gimme field goal attempts in overtime and the Cardinals and Seahawks settled for a wild, absurd 6-6 tie Sunday night at University of Phoenix Stadium (box). The tie was the first in Seahawks’ history and left them 4-1-1, 1.5 games ahead of the Cardinals (3-3-1) in the NFC West.

With 3:26 left in overtime, Catanzaro clanked a 24-yard attempt off the left upright that would have given the Cardinals the win. Then Hauschka, with a chance for free drinks for the rest of his life at any Seattle pub, blew a 28-yarder at 0:11, hooking it wide left. Arizona QB Carson Palmer had time only for a Hail Mary pass that was swatted down as it neared the Seattle goal line.

The Seahawks forged the rare tie despite a horrific offensive display — the worst of the Russell Wilson era. Until the fourth quarter, the Seahawks’ longest play from scrimmage was 14 yards. Their deepest penetration was their own 46-yard line — in the first quarter. The Seahawks nearly conceded a safety, and wound up with only 257 total yards, 52 rushing, and 3-for-14 on third downs as Arizona controlled the clock 46:21 to 28:39.

Until OT, the Seahawks only time in Arizona territory came when rookie WR Tanner McEvoy blocked Ryan Quigley’s punt with 4:33 remaining at the Arizona 27. Seattle still couldn’t score a touchdown.

But the Seahawks hung in all night with one of their best defensive and special teams efforts in recent years. LB Bobby Wagner hurdled the Arizona offensive line toblock a field goal in the second quarter, and McEvoy’s snuffed punt in the fourth enabled Seattle to tie the game 3-3 on a 40-yard field goal by Hauschka, prompting overtime.

Arizona took a 6-3 lead in OT on Cantanzaro’s 45-yard field goal and Hauschka matched it with a 36-yarder that tied the score 6-6. On Arizona’s next possession, QB Carason Palmer found J.J. Nelson for a 40-yard gain. Seattle CB Richard Sherman was all over the route, but stumbled and missed the tackle as Nelson raced to the goal line. He would have scored the winning TD if SS Kelcie McCray, playing for the injured Kam Chancellor, hadn’t downed him at the five-yard line. Then Cantanzaro, flinching from another Wagner leap over the line, cringed and missed.

Under duress all game, Wilson made the most of the miss. He completed a 31-yard pass to Jermaine Kearse and a 27-yarder to Doug Baldwin to set up Hauschka’s final field goal attempt from 28 yards. But Hauschka improbably pulled it.

Wilson completed 24 of 37 for 225 yards without a touchdown or an interception, but most of his yards came in the fourth quarter and overtime (he had only 34 yards passing in the first half). He finished with an 81.5 rating, 20 points below his usual standard, and was unable to do anything with his legs, rushing once for a minus-two yards. Although the Cardinals sacked him only once, he played under unrelenting pressure and wasn’t helped by a series of holding penalties by his offensive line.

Christine Michael ran 16 times for 52 yards and rookie Alex Collins once for two yards. That was it for Seattle’s running game.

Baldwin caught six balls for 69 yards and TE Jimmy Graham five for 53, but had two drops. Kearse caught three for 51 on four targets. Tyler Lockett was targeted twice and caught both for 13 yards.

The Seahawks did not score in the first half for ther first time since Dec. 14, 2014 at St. Louis.

Arizona could have taken a 10-0 lead in the third quarter, but Seattle snuffed a fourth-and-one at its 19-yard line after coach Bruce Arians shunned a chip-shot field goal attempt.

David Johnson ran for 113 yards and caught eight passes for another 58. He had a late chance to score, but FS Earl Thomas knocked him out at the one-yard line.

“It was a really amazing football game. My brain doesn’t know where to go with this one. An incredible match of two teams battling. There were so many times where we could have given up. Everything went OK timing wise on the Hauschka (potential game winner) field goal. He just didn’t hit it. Unfortunately nobody won.” — Seahawks coach Pete Carroll

“Disheartening to play that well and not come out of here with a victory.” — Arizona coach Bruce Arians

The Seahawks travel to New Orleans to face the Saints (2-4. 1-2), a 27-21 loser at Kansas City Sunday, at 10 a.m. Sunday  (FOX). The Seahawks return to CenturyLink Field Nov. 7 to face the Buffalo Bills in their only Monday night game of the season.