The Sounders won when they had to, scrapping past Real Salt Lake 2-1 in a sloppy match Sunday that nevertheless earned them the No. 4 seed in the West playoffs against Sporting Kansas City. 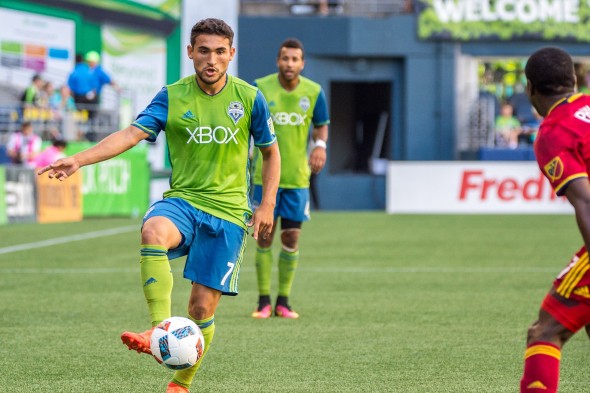 The Seattle Sounders Sunday pulled off the soccer equivalent of Indiana Jones sliding underneath a rapidly descending stone door, beating Real Salt Lake 2-1 at home in front of a crowd of 50,022 at CenturyLink Field to clinch fourth place in the Western Conference. Seattle earning the home game in the knockout round of the playoffs against Sporting Kansas City Thursday (7 p.m., FS1) is the club reaching under the door to grab its hat.

The Sounders walked on to the pitch needing to win at home to guarantee a spot in the playoffs, while Real Salt Lake could have been eliminated by a Portland win on the road against Vancouver and a loss to Seattle. The high stakes and nerves seem to have had a negative impact on the quality of play in front of a raucous crowd.

Interim head coach Brian Schmetzer said the contest was a match defined by its physicality and intensity, rather than technique.

“I would have loved to have had a shift of better soccer,” Schmetzer said. “It’s a playoff-type game, so sometimes the soccer isn’t that great. The last game down in Dallas was similar because we weren’t able to keep possession.”

The win completes a turnaround for a club that started 6-12-2 over its first 20 games before firing head coach Sigi Schmid. The club benefited since that time by the healthy recovery of center back Roman Torres from an ACL tear, the steady improvement of rookie Jordan Morris, and the arrival of Uruguayan midfielder Nicolas Lodeiro, who has four goals and eight assists in 13 games for Seattle this season.

The improvement of on-field personnel has helped, but it also remarkable that the club could fight through the loss of Clint Dempsey for the season due to complications from an irregular heartbeat. Also, a right-knee sprain kept out left winger Andreas Ivanschitz.

The turnaround by the Sounders isn’t miraculous. It was built on a body of hard work and determination, qualities in plentiful supply on Sunday.

Seattle started the match with its best bit of soccer of the afternoon, grabbing a goal three minutes in. Tyrone Mears ran onto a Cristian Roldan backheel and sent a low ball to Jordan Morris, who fanned it across the goal to Alvaro Fernandez. Fernandez tapped in.

On minute later, Real Salt Lake threw water on the early celebration, when a through ball found Jordan Allen inside the penalty area. Allen was tightly marked by Joevin Jones, so he dropped the ball back to Luke Mulholland, whose shot deflected off Jones and into the far side of the net.

Seattle scrapped its way on top in the 30th minute, when a corner kick from the right side found the head of Torres, forcing a swatted save from RSL keeper Nick Rimando. Rimando’s save however, fell on to the foot of Roldan, who punched it in for his fourth goal of the season.

“I was put into the box to be a pest, to shield guys away from Chad Marshall and Roman,” Roldan said of his goal. “I was lucky enough to get away from my runner and kick the ball into the back of the net.”

The second half was equally messy, with rough tackles and short spurts of possession by each side as the Sounders fought to avoid conceding another goal. Schmetzer brought in Nelson Valdez for midfielder Erik Friberg in the 69th minute and Brad Evans replaced Fernandez ten minutes later to try to hold the ball.

“When we brought Nelson on tonight, it gave us a couple more passes, the ability to keep possession higher up the field,” Schmetzer said. “I don’t know if the game changed totally, because I don’t know if the game was a great match by a soccer standpoint. But the second half, when I was able to bring Brad on and bring Nelson on, it gave us a little more confidence in our ability to possess the ball.”

It was all business from Seattle. Schmetzer insisted that his attempt to substitute on Zach Scott, who announced Sept. 15 that he would retire at the end of the season and was honored before the game, was to remove the aerial threat of RSL substitute Yura Movsisyan, rather than honor Scott. The final whistle came before Schmetzer could make the change, however.

In the end, the Sounders did enough to fight off Real Salt Lake. After a 4-1 loss by Portland to the Whitecaps Sunday, Seattle will be the lone Cascadia representative in the playoffs.

Schmetzer said that despite the playoff atmosphere, the club would have to perform better  Thursday if it expected to advance past the single-elimination round.

“Would I like the soccer to be better? Yes,” Schmetzer said.”We work all the time on a possession-based style of play, getting the outside backs involve . . . It’s always a work in progress, we have to understand that we’re in an imperfect world.

“In pro sports it’s tough to win and tough to play the same way every single game, but in training we’re working on trying to break through in the final third. Based on what I saw tonight, I think we need to continue to try to be more dangerous.”

For a club that looked as dead in the water as the Sounders did in a 3-0 loss to Sporting Kansas City July 24 to fight its way to a playoff spot without several key players, Seattle has gone through its most impressive revival in the MLS era.